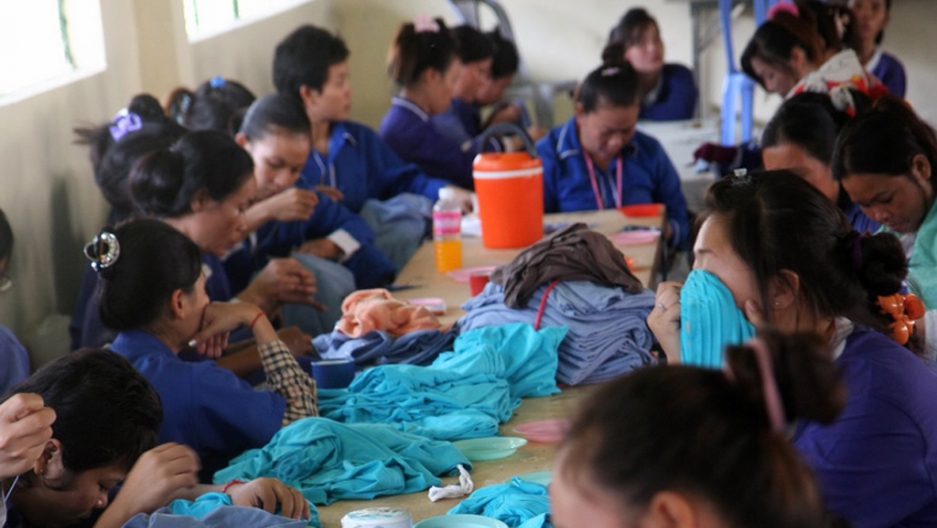 Prisoners at Prey Sar Prison in Phnom Penh, Cambodia, detail garments from the Croft & Barrow brand, which is owned by the Milwaukee-based Kohl's Department Stores.
Share

PHNOM PENH — Take a look at what you’re wearing. If any of your clothes bear a “Made in Cambodia” label, it’s a safe bet they were produced under decent conditions, by relatively well-paid workers.

The Cambodian garment industry is small by global standards, but it has one big thing going for it: as Western clothing brands have become increasingly sensitive to the conditions in their supply chains, Cambodia has set itself up as a “sweatshop-free” alternative to garment giants like China and Bangladesh.

Though such standards are not always upheld in practice, the country has become something of a boutique destination for foreign brands concerned about corporate social responsibility.

But all this could be about to change. Human rights groups say the country’s hard-won reputation is on the line following the passage of a new law that legalizes the use of prison labor by private companies — including garment contractors.

The law, approved by Cambodia’s Senate late last month, gives the general director of prisons the power “to enter into a contract to allow prisoners to work for any organization or individual” in industry or farming.

Rights groups say the new rules fly in the face of both Cambodian and international labor laws, such as Convention 29 of the International Labor Organization. It also puts the country’s trade partners — which include US firms — at risk of importing garments and footwear unlawfully produced by prisoners.

“What they’ve done with this new law is open Pandora’s Box,” said Phil Robertson, deputy Asia director of the New York-based Human Rights Watch (HRW). “All of a sudden [prison officials] are going to have a captive prison workforce that they can use to contract labor production for a fraction of what a normal company would pay to a free person.”

There are good reasons to worry. For a start, Cambodian prisoners live in appalling conditions.

According to the local rights group Licadho, the government allots just 2,800 riels (about $0.70) per day to feed each prisoner, and inmates are packed like sardines into overcrowded cells. In these conditions, exploitation is rife.

“Inside prison walls, life is dominated by corruption,” Licadho reports. “There is a price tag attached to every amenity imaginable, from sleeping space to recreation time. Those who can’t afford to pay are forced to endure the most squalid conditions.”

More from GlobalPost: When genocide turns personal in Cambodia

Since 2009, according to information shared by HRW, Prey Sar, Phnom Penh’s main correctional facility, as well as jails in Kandal, Takeo, Battambang, Svay Rieng and Preah Sihanouk provinces, have set up small-scale prison labor programs. While nominally producing goods for the domestic market, there is some evidence that prisoners have produced goods for export, including to the US.

Photos obtained by GlobalPost appear to show female prisoners at Prey Sar working on garments bearing the Croft & Barrow and Sonoma brands, both owned by the Wisconsin-based Kohl’s Department Stores. The 1930 Tariff Act bans the import to the US of any goods that have been produced with forced labor. The photo attached to this story is one such photo, and below is another. The source of the photos wished to remain unidentified.

The contents of the photos, dating from late 2009 and early 2010, could not be independently verified. But rights activists say the corruption and squalor of the Cambodian prison system mean that the passage of the new law could trigger a steady leak of for-export garment work into prisons.

Already, local media have reported that prisons in Battambang, Kandal and Takeo are planning to establish for-profit garment schemes under the new law. Cambodian prison officials say the programs are voluntary, with profits being split among inmates, prison management and reinvestment in raw materials.

At the same time, the government also claims it is taking a strong line against the use of prison laborers in export production.

In July, the Commerce Minister Cham Prasidh rose the issue in a letter to the head of the Garment Manufacturers Association of Cambodia (GMAC), which represents the apparel industry, writing that the use of “impure” sources of labor could “cause the buyers in main import countries to cancel their buying agreements” and result in “a disaster” for an industry that employs around 300,000 Cambodians.

Ken Loo, GMAC’s secretary general, said similarly that his organization opposed the use of prisoners to assemble for-export garments, and would investigate any allegations. “The fact that it’s legal here doesn’t change things for other countries where we export,” he told GlobalPost.

Vicki Shamion, a spokesperson for Kohl’s Department Stores, said her company was unaware that any of its products had been or were being manufactured in Cambodian jails, but that its vendor guidelines “expressly forbid the use of bonded labor, indentured labor, prison labor or forced labor in the manufacture or finishing of products ordered by Kohl’s.”

“We take allegations related to violation of these terms very seriously,” Shamion said. She added that recent allegations would be investigated.

Whether or not government checks succeed remains an open question. HRW says turning Cambodia’s ramshackle prisons into ad hoc garment factories — for domestic production or otherwise — has the potential to call into question the standards of the entire industry.

“I have no confidence whatsoever that the government of Cambodia has either the political will or the capacity to prevent prison production for profit from ending up in the export stream,” Robertson said.

Adam Hutchinson, executive director of the Prison Fellowship Cambodia, which provides services in 24 Cambodian prisons, said it was important to distinguish between the use of prison labor for producing export goods, and inmate labor programs in general.

“Prison work schemes, if used well, can be of great benefit for both prisoners and prisons,” he said. But the “inefficiency and inconsistency” in monitoring capacity meant that prison labor systems were “open for abuse.”

“There seems to be no clearly defined process at the present moment,” Hutchinson said.