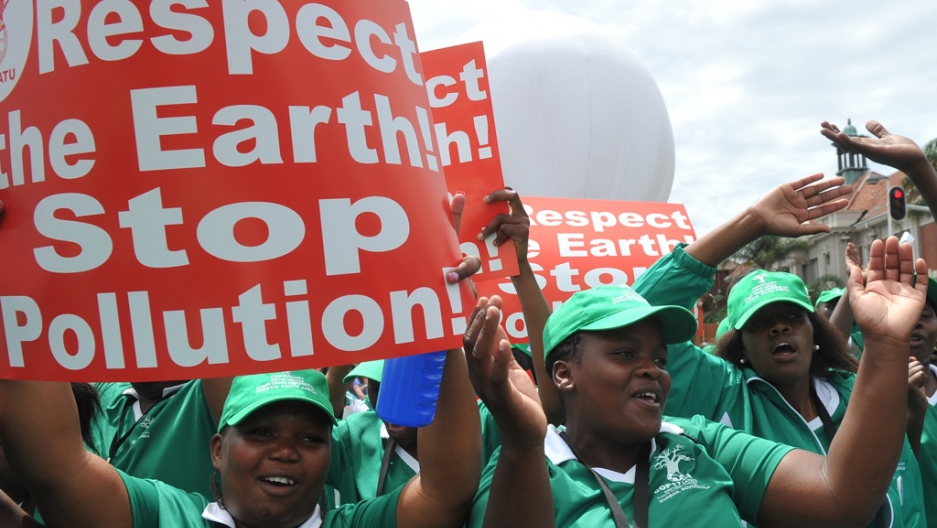 Hundreds of protesters march in on December 3, 2011 at the UN climate talks in Durban. The 12-day climate change conference will include talks between the representatives of 194 nations, under the UN Framework Convention on Climate Change (UNFCCC) end on December 9.
Credit: Alexander Joe
Share

Hopes of reaching a deal to replace the Kyoto Protocol to combat global warming appeared slim on Saturday as the Climate Conference in Durban, South Africa, entered an extra day, Deutsche Welle reported.

With negotiations continuing for a 13th unscheduled day after a night of wrangling over the text of a deal, the German environment minister Norbert Röttgen warned time was running out.

"We are now in an extremely critical situation because of time. The delay is very critical ... It is very doubtful whether we will succeed."

Europe is pushing for proposals to be agreed on a legally binding protocol by 2015 that would cover the world's major carbon polluters, the Associated Press reported.

The plan would extend the existing Kyoto Protocol, which expires next year, and draw the world's biggest emitters into binding emission cuts by 2020.

China, India and the US, which account for about half of the world's carbon emissions, have been resistant, with disagreements centering on whether to hold future talks on an updated protocol, Al Jazeera reported.

"At this point there are two groups very split. On the one side an unlikely alliance between the US, Brazil, India and China – for different reasons resisting the idea of those talks and a future deal, on the other side the EU and just about everyone else wants to get them off the ground as soon as possible."

French Environment Minister Nathalie Kosciusko-Morizet said the chance of a deal being reached on Saturday had been hindered by the painfully slow of pace of negotiations, Agence France Presse reported.

She blamed this on the chairmanship of South Africa, saying key draft documents needed for decision-making had not materialized.

"Last night, the chair did not even seem to take the problem of time into account ... We are in the worst situation – that of failure – because of time management ... because of a lack of negotiations, a lack of confrontation."

The summit was suspended on Friday when a coalition of island nations, developing countries and the European Union complained that the draft text lacked ambition, Reuters Africa reported.

With talks entering an extra day following the suspension, and with the clock ticking on the final day of negotiations, there were warnings that environment ministers may have to leave before signing off on a deal.