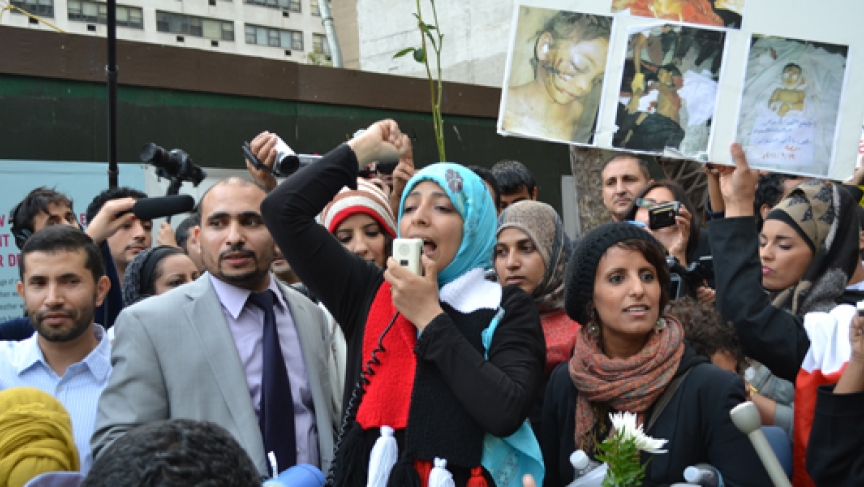 Share
Tawakul Karman looks like an average Yemeni woman: petite, unimposing, wrapped in a black abiya, with her husband standing nearby. But Karman has an easy relaxed presence about her; she's quick-witted and jokes about her broken English and then teases her husband about his. And she's far from average. On Saturday, Karma will officially receive the 2011 Nobel Peace Prize in Oslo, along with Ellen Johnson Sirleaf and Leyman Gbowee, both from Liberia. The three will be honored for "their non-violent struggle for the safety of women and for women's rights to full participation in peace-building work." At 32, Karman is the youngest person ever to win the peace prize. For years now, Karman has been one of Yemen's leading grass-roots activists. She's fought for the rights of women and freedom of speech. Last January, when the Arab Spring swept through the Middle East, Karman and a couple hundred students from Sana'a University began a sit-in at Yemen's Change Square. The government publicly slandered her, and Sana'a clerics blamed her for ruining the morality of women. But within a few months, hundreds of thousands of Yemenis in cities from Aden to Taiz had joined the demonstrations, calling for the overthrow of the regime. Karman has been dubbed the "Mother of the Revolution," and when she speaks, people listen. At a recent protest in front of the United Nations in New York, Karman led a group of Yemenis in chants against the regime. Some came from across the country to see her. Since being named a winner of the Nobel Peace Prize, Karman has travelled from Doha to Washington, DC, to generate international pressure on the government of Yemeni President Ali Abdullah Saleh. "I am here to tell the whole world, to tell the people who believe in freedom, my people in Yemen sleep in the street since nine months, this great people deserve freedom," Karman said. "This is the thing that I will tell people here. Also I want to tell people in Sana'a that you are not alone, there are people here who care about your freedom and their role starts now." Saleh recently agreed to step down as president in exchange for immunity. Karman and her followers argue that's not enough, because Saleh's cronies — including his son and other family members — remain in power. But some long-time Yemeni opposition leaders support the deal, and that's created a rift in the anti-Saleh movement. "The opposition parties, opposition leaders, were never the voice of the revolution," said Raja Althaibani, a Yemeni-American who flew to Sana'a in May to join the youth revolution on the ground; she's protested alongside Karman. "The people who are signing the deal those are people who are looking for their own interest," Althaibani said. "We've always seen clashes between the revolutionaries on the ground and those leaders. And the revolutionaries have always made it clear, they aren't representative of who we are or our demands." This popular sentiment could have put Tawakul Karman at odds with demonstrators. While she's been a leader of the youth movement since the start of the revolution, Karman is also a leading member in the Islah party, the country's main Islamist opposition party. Karman has been criticized for this dual role. But Althaibani said Karman has proved herself time and time again. Althaibani recalls one particular demonstration in Sana'a. "I get a call saying Tawakul is leading the march, and the youth are behind them and we're running there and then we hear shots," Althaibani said. She said Karman was taken to a makeshift hospital, and then came right back. "She put her life on the line and made enemies of every opposition leader at the Square," Althaibani said. Karman has criticized her party for going against the young demonstrators' demands. She has also defied religious and cultural gender constraints to call her own party and the regime for underestimating the role woman have played in Yemen's revolution. "Now there is a new century, a new period, women aren't just victim," Karman said. "She can save lives, she can be revolution, she can step down the regimes and she can also build her country. So the bad image about women is finished. Now we start a new period."