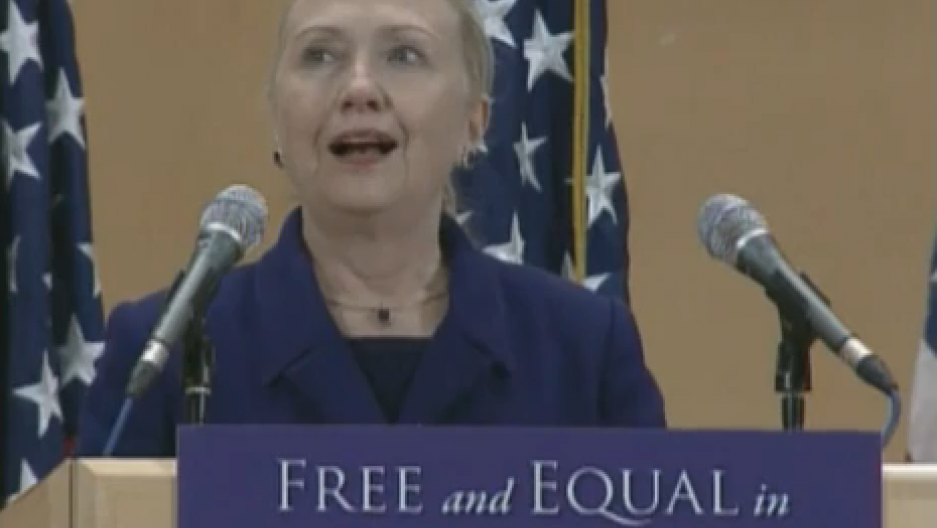 Hillary Clinton, U.S. Secretary of State, speaks at a meeting of the United Nations Human Rights Council in Geneva where she announced American support for the rights of LGBT people. (Photo from United Nations video.)

Secretary of State Hillary Clinton on Tuesday unveiled a shift in American foreign policy with respect to members of the lesbian, gay, bisexual and transgender communities.

"They are denied opportunities to work and learn, driven from their homes and countries, and forced to suppress or deny who they are to protect themselves from harm," Clinton said.

From now on, promoting a protecting the right of LGBT people will become an official part of American foreign policy. And while the pronouncement came with the stamp of approval of President Barack Obama, there's no word yet on what the United States will do with this new policy.

"We haven't gotten that level of fine detail yet," said Imogen Foulkes, BBC correspondent in Geneva. "We would expect to see the United States more openly and publicly raising this issue with countries who they feel their record is not good."

Foulkes also speculated that it could lead to a U.S.-backed initiative to protect LGBT rights coming before the United Nations Human Rights Council in Geneva. Clinton also announced the U.S. would spend $3 million to finance LGBT organizations.

There's also been a suggestion the United States will link foreign aid to a nation's record on tolerance and respect for gay people.

The speech was kept tightly under wraps until just befor it was delivered because Clinton's office was so concerned about what the international reaction would be.

"Many of us had thought her speech would be devoted to (Syria)." Foulkes said. "We were all rather surprised that this particular initiative was made now when there are some major and immediate foreign policy issues, particularly in the Middle East, that are also taking her time."

Some ambassadors, particularly of predominantly Muslim countries, looked uncomfortable as Clinton spoke, Foulkes said. However, when she left, she was given a standing ovation.

"A lot of ambassadors left with rather a lot to think about," Foulkes said.