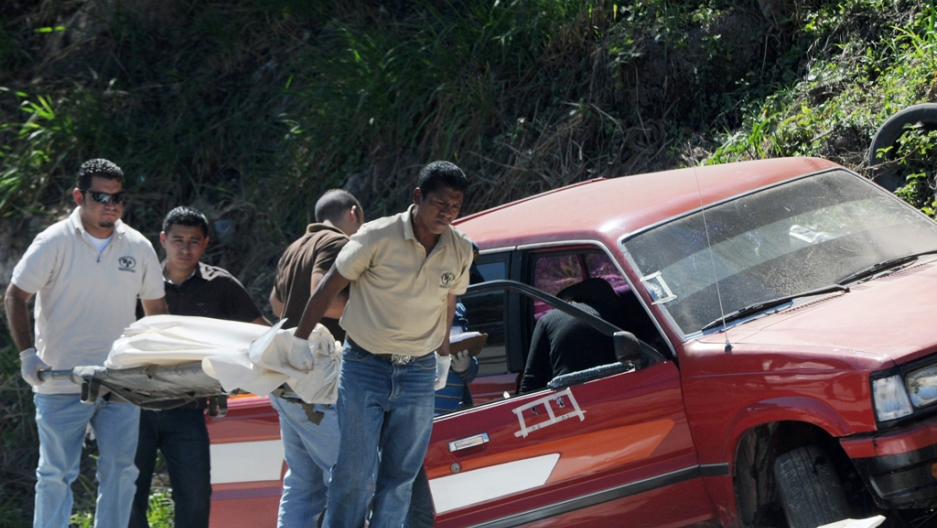 The body of journalist Luz Marina Paz is removed after she was shot in her car together with her driver. Paz is the 17th journalist to be killed in Honduras over the past few years.
Credit: Orlando Sierra
Share

Yesterday, a radio host and her driver were murdered right outside the journalist's home in Tegucigalpa, Honduras, according to Fox News Latino.

Luz Marina Paz, 38, was an owner of a small business and "had been threatened by an extortion gang for refusing to pay protection money."

Paz and the unidentified companion were shot with "dozens of bullets" by two men on a motorcycle, reported The Associated Press. She was on her way to work.

In response to her murder, Human Rights Commissioner, Ramon Custodio, told BBC News today that the dangers in Honduras are only increasing.

He added that the along with murders, members of the media also suffer from threats and attacks.

The BBC also reported that "some 17 journalists have been killed in Honduras since 2009 when the military helped to overthrow then president Manuel Zelaya." Other journalists were killed because they angered members of the mob and drug traffickers.

According to the UN, Honduras has the highest murder rate in the world: 82 killings for ever 100,000 people.

A day earlier, a security guard at "La Tribuna" was wounded after several gunmen came and attacked the newspaper's offices. A number of reporters from there have been receiving death threats due to a story they covered about the murder of two college students in October.