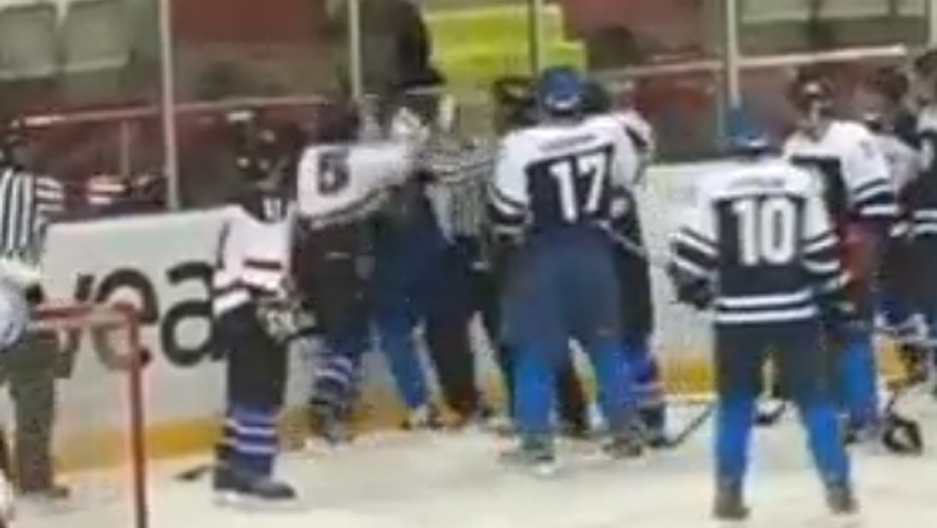 A massive fight between ice hockey players from the Turkish Kocaeli Metropolitan Municipality Sports Club and the Ezurum Youth Sports Club ended only after riot police were called in, according to reports.
Share

A massive brawl at a recent ice hockey game in Turkey became so violent that Turkish riot police had be called in to break things up.

The match was between Kocaeli Metropolitan Municipality Sports Club and the Ezurum Youth Sports Club from Turkey's Ice Hockey Super League, according to Yahoo! Sports.

Here’s Puck Daddy on the melee on ice:

Suffice it to say, things were beyond the control of the officials. According to Turkish news site Haberler.com, riot police, who were across the hall at the time, were called in to help restore order.

And also someone's mom: a brave woman steps out onto the ice at the 1:45 mark, clearly intent on grabbing some ears. Fortunately, she was convinced to turn back.

Two players were injured in the horrific scene. Safe to assume one of them is probably No. 18, whom the players drag to the bench because he's too hurt to get there on his own. That's about as cringe-inducing as anything you're going to see here. First aid tip: you're not supposed to do that.

Eventually, order was restored, but not before officials decided to cancel the rest of the game. With Ezurum leading 4-1 at the time, they were declared the winners by forfeit.