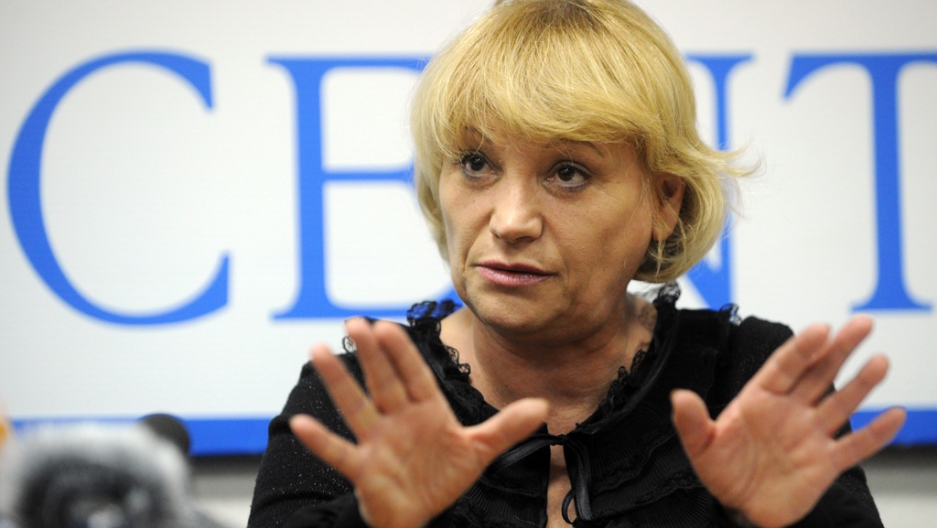 The head of a Russian election monitoring group Golos Liliya Shibanova attends a news conference in Moscow. The Moscow-based NGO has seen unprecedented pressure ahead of Russia's parliamentary polls in what it called an attempt to prevent them from exposing election violations.
Credit: Kirill Kudryavtsev
Share

The head of Russia's only independent political watchdog was held at Moscow's Sheremetyevo airport on Saturday as elections in the world's biggest country began, The Associated Press reported.

Lilya Shibanova, the leader of Golos, was detained in Moscow after she refused to hand over her laptop to officials. On Friday, Golos was fined the equivalent of $1,000 for violating a law that bans the publication of opinion poll results within five days of the election, CTV reported. The United States has said it was concerned about the "pattern of harassment" against the watchdog, Reuters reported.

Golos — "vote" in Russian — is funded from Europe and the United States and runs a hotline for electoral violations. Its interactive map showed more than 4,500 reported violations linked to Sunday's vote, The New York Times reported.

The election could trim the number of seats Vladimir Putin's United Russia holds in the Duma, the country's lower house of parliament. Though United Russia is expected to keep its majority, some Russians have become skeptical of Putin's 12-year rule.

Independent pollster Levada Center said last week that United Russia will receive 53 percent of the vote, down from the 64 percent it got in the 2007 vote. This would deprive the pro-Kremlin behemoth of the two-thirds majority that has allowed it to amend the constitution. Another poll by Levada released in late November shows that 51 percent of Russians believe the election only "imitates competition."

Opposition parties have complained that the election has been biased, with government-run television stations granting the party more airtime. The Kremlin-controlled station NTV television aired a show on Friday evening that attacked Golos directly, Time reported. The program featured suitcases full of U.S. dollars and claimed that the organization was supporting opposition parties. Authorities also have been encouraging employees to vote for United Russia, NPR reported.

59-year-old Putin has long been Russia's most powerful politician, promising stability and an improved way of life in exchange for certain limitations on democracy. Supporters credit Putin for supplying the country's greatest economic boom in 30 years, Reuters reports.