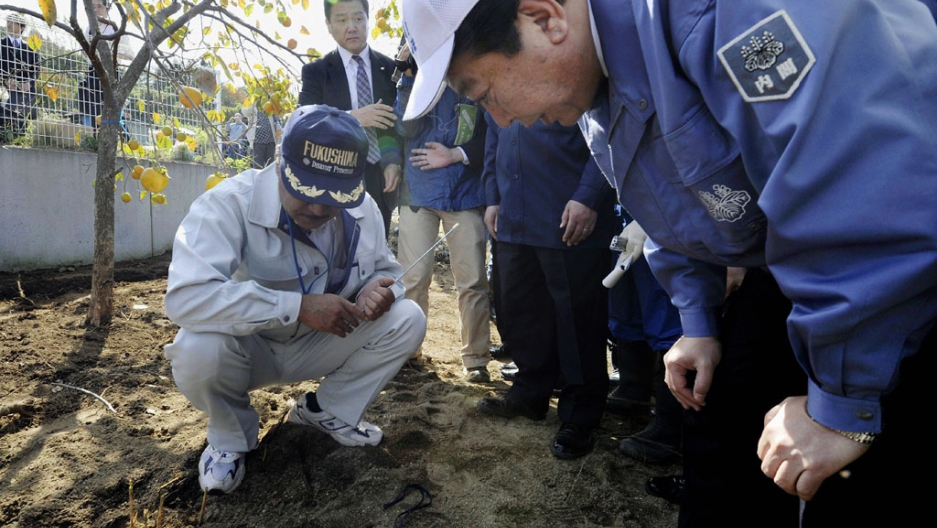 TOKYO, Japan — Molten fuel inside one of the reactors at the Fukushima Daiichi nuclear power plant came within centimeters of breaching its steel outer casing, the plant's operator said, in another indication that the accident was more serious than first thought.

Tokyo Electric Power (Tepco) said this week that it believed most or all of the fuel inside reactor No. 1 had melted in the immediate aftermath of the March 11 tsunami, which disabled back-up power supplies to cooling systems and triggered the world's worst nuclear accident since Chernobyl.

Citing data acquired from a new simulation of the accident, Tepco said the fuel may have breached its inner containment vessel and bored through most of the concrete floor of the outer containment vessel — the reactor's last layer of protection before its steel outer casing.

In a worst-case scenario, the utility said the fuel had penetrated the concrete floor by up to 65 centimeters (26 inches), just 37 centimeters (15 inches) from the outer steel wall.

More from GlobalPost: Fukushima puts on a good face for the press

It said, however, that the fuel was being cooled by water injected into the reactor, adding that the erosion of the concrete had stopped.

Had the fuel reached, and then breached, the reactor's last line of defense, it could have sparked an even worse disaster, similar to the theoretical catastrophe known as the "China syndrome."

The revelation comes days after reports said Tepco had ignored warnings from its own experts in 2008 about the potential for a huge tsunami along the coast of Fukushima prefecture.

The in-house report said the 40-year-old plant was at risk of substantial damage from a tsunami of up to 10.2 meters (33 feet) in height, the Kyoto news agency said. But senior Tepco officials had dismissed the risk as "unrealistic." The tsunami that crippled the plant on the afternoon of March 11 was up to 14 meters high.

Despite the new complications, Tepco insists it is on schedule to bring Fukushima Daiichi's reactors to a state of cold shutdown by the end of this year, and possibly as early as the middle of the month.

But criticism of its version of events following the tsunami is unlikely to dissipate soon. The firm initially said that fuel in the three reactors that suffered meltdown had not breached its inner presser vessels, then later conceded that some, but not all, had dropped into outer containment vessels.

More than nine months into the crisis, Tepco continues to rely on computer simulations of the disaster to gauge the extent of the damage, because radiation levels inside the reactor buildings are far too high for workers to enter.

As a result, the firm was unable to give details of the exact position of the melted fuel, or visually confirm whether all of it was exposed to cooling water being pumped in from outside. "Almost no fuel remains at its original position," the report said.

"Uncertainty involved in the analysis is significant, due to the uncertain nature of the original conditions and data used," it said, adding that about 60 percent of melted fuel in reactors Nos. 2 and 3 may have dropped onto their concrete bases, but had caused less damage.

The fuel discovery is not expected to delay an imminent announce that the plant has been brought to "cool shutdown" — the stage at which water used to cool the reactors stays below boiling point, preventing the fuel rods from heating up again.

Tepco has also sought to quell speculation that the accident was triggered by March's 9.0-magnitude earthquake, rather than the tsunami that followed.

In an interim report published Friday, it said tsunami flooding had directly caused the crisis and not, as some have argued, intense shaking during the quake. The company maintains that the plant was prepared to withstand even the most powerful earthquakes.

"We had prepared for accidents at a certain level and had documented procedures, but in this case the situation developed into one that deviated from out accident-response assumptions," the report said.

"As a result, we were not able to take measures to counter the accident at the Fukushima Daiichi plant and could not prevent reactor cores from sustaining damage."

The disaster prompted a safety review of all of Japan's nuclear reactors that, along with pre-March 11 closures for regular inspections, has left just nine of the country's 54 reactors in operation.

Unless power firms win local approval to restart reactors that have passed strict new tests of their ability to withstand natural disasters, Japan could be without a single working reactor by May next year.

Greenpeace has called on Japanese authorities not to restart any of the nuclear reactors currently offline until it improves its disaster reponse plans.

It said simulation maps of potential accidents being used to devise emergency response efforts ignored accidents of the severity of Fukushima Daiichi.

"The Fukushima Daiichi emergency response effort was slow, chaotic and insufficient, and it appears that the government has learned nothing from it," said Junichi Sato, executive director of Greenpeace Japan.

"These maps show that there is a strong risk of reactor restarts being pushed through without a proper, science-based assessment on the real risks being conducted, and without proper precautions being taken to protect the communities around the plants."