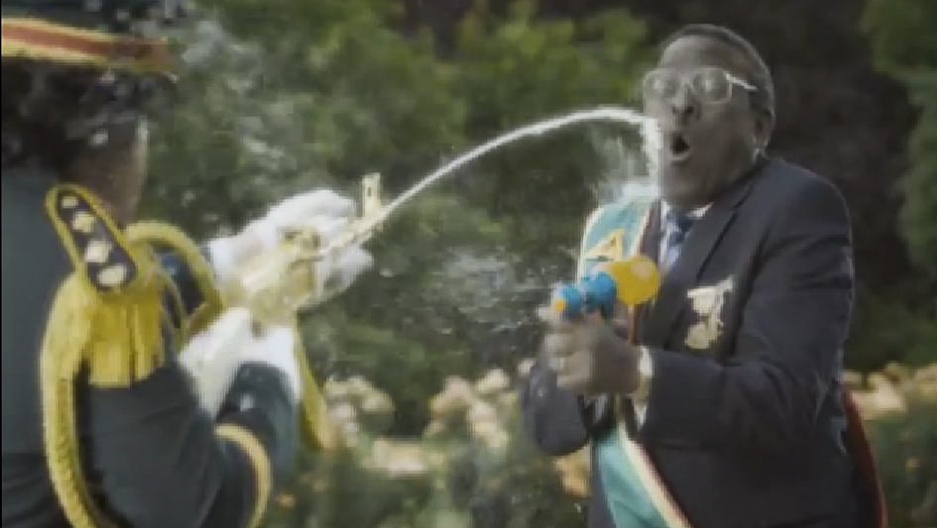 A group of militant youth loyal to Zimbabwe's President Robert Mugabe have called for a boycott of Nando's restaurants after the fast-food chain released a commercial called the "Last Dictator Standing," showing Mugabe frolicking with dead dictators including Muammar Gaddafi, Saddam Hussein and Idi Amin.
Share

Zimbabwean state radio quoted the leader of Chipangano, a "brotherhood" of Mugabe loyalists alternatively described as a "brutal band of thugs," as saying that Nando's restaurants in Zimbabwe risked punitive action, including a boycott, over the ad, the Associated Press reported.

Nando's South Africa said they took the threats seriously, and would stop airing the TV commercial, which was part of the company's holiday ad campaign, the South African Press Association reported.

"We've noted with concern the political reaction emanating out of Zimbabwe, including perceived threats against Nando's Zimbabwe's management, staff and customers," the company said in a statement, according to SAPA.

"We feel strongly that this is the prudent step to take in a volatile climate and believe that no TV commercial is worth risking the safety of Nando's staff and customers."

Nando's is a Johannesburg-based fast food chain that sells Portuguese/Mozambican-style peri-peri chicken. While the "dictators" ad was made for the South African market, it is widely available online and would be visible in neighboring Zimbabwe on satellite TV channels.

The company that owns Nando's Zimbabwe franchise criticized the ad in the state-run Herald newspaper, and reportedly tried to distance itself from it, calling the commercial "insensitive and in poor taste."

"No consultation takes place between the different franchisees when they are formulating and executing marketing strategies for their respective markets," said Musekiwa Kumbula, corporate affairs executive for Innscor Africa which runs Nando's Zimbabwe, according to the Herald.

According to the AP, "it is an offense under Zimbabwe law to insult Mugabe or undermine the authority of his office."