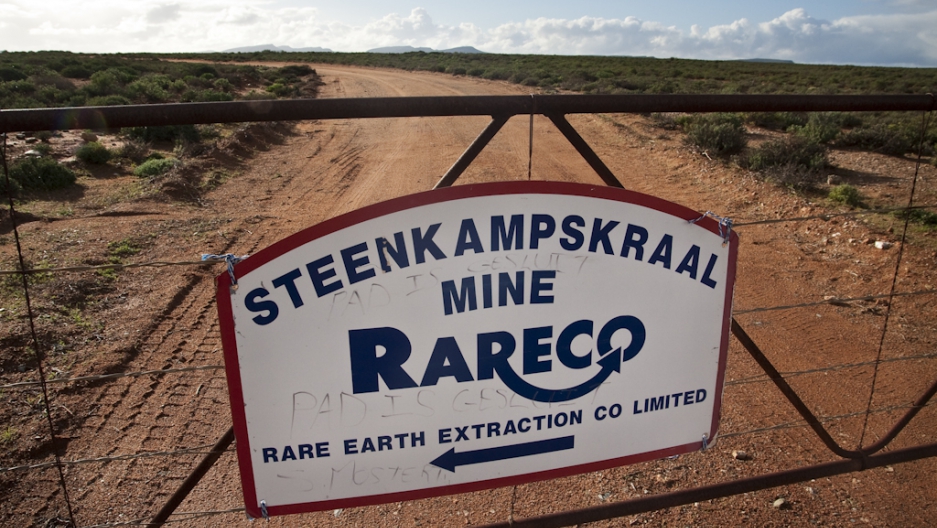 The entrance gate to Steenkampskraal mine, north of the town of Vanrhynsdorp in South Africa. The mine was abandoned in 1963, and is now being turned into a rare earths facility.
Credit: Erin Conway-Smith
Share

VANRHYNSDORP, South Africa — The detritus of South Africa’s mining past rises like a ghost town from the arid expanses of the Namaqualand region: the apartheid-era hostels for black workers, and a distance away, the houses for white managers. Razor wire and warning signs block the mine shaft entrance, and rusty old equipment is heaped nearby.

But a half-century after the Steenkampskraal mine was abandoned, it is returning to life.

The old buildings are being torn down, and buried beneath impermeable clay because of their radioactivity. The mine shaft is being restored, and the entire site brought up to environmental code.

Steenkampskraal, abandoned in 1963 when demand for thorium went bust, is being refurbished because of the modern need for rare earth minerals — the minute particles used in smartphones, high-tech weaponry, electric cars and a host of other electronics.

Crucially, rare earths are being mined here to challenge China’s dominance of the supply of these strategically important yet obscure elements.

China controls about 95 percent of the world’s available supply of rare earth minerals, driving the interest in remote mine sites such as this one in South Africa. Mining companies are seeking new supplies that can quickly enter the market, and effectively dilute China’s ability to control rare earth minerals for political gain.

Last year China halted its rare earth exports to Japan in a spat over disputed islands in the East China Sea — a move that also made the United States nervous, and determined to reduce its reliance on Chinese rare earths.

Great Western Minerals Group Ltd., a small company based in Saskatoon, Canada, is one of the many firms vying to provide an option to China — and is betting that it is faster to refurbish an old mine like Steenkampskraal than to start from scratch.

The Canadian company bought the mine from the South African company Rare Earth Extraction Co. Ltd. (Rareco), and is aiming to begin production by January 1, 2013, with an expected 5,000 tons of rare earth oxide a year. Currently, about 120,000 tons annually enter the world market.

“The site is cleared and mine refurbishment is well under way, with completion of the shaft refurbishment by year end,” said Jim Engdahl, president and chief officer of Great Western, in an email.

Another company, Luxemburg-based Frontier Rare Earths, is also building a mine in the Namaqualand, a semi-desert region stretching up South Africa’s West Coast that is famous for bursting into flowers every spring. Frontier’s Zandkopsdrift mine is located 60 miles north of Steenkampskraal.

Experts point out that rare earth minerals aren’t actually rare — it is just the processing of them that can be costly and difficult.

To that end, Great Western has announced a tentative agreement to develop a rare earth separation plant in the nearby town of Vrendendal, in a joint venture with Chinese company Ganzhou Qiandong Rare Earth Group Ltd., which has 20 years of operational experience in processing rare earth oxides and metals.

At Steenkampskraal, another problem is dealing with the past: the highly radioactive waste left behind when the mine was abandoned by an Anglo American subsidiary in the 1960s.

Steenkampskraal is among the most radioactive contaminated sites in the world – approaching the levels of Chernobyl and Fukushima, according to Robbie Louw, former managing director of Rareco and now a consultant to Great Western.

Staff and visitors to the site must wear blue plastic booties over their shoes, and clip dosimeters to their clothing, to measure radiation exposure.

Steenkampskraal is being brought up to current environmental standards — and, Louw said, the site is even being “overdesigned” in case environmental regulations are tightened in future.

South Africa: Has freedom made us fat?

But despite the difficulty of processing rare earth oxides, and challenges such as the radiation at Steenkampskraal, analysts have warned of the danger of a glut of the minerals eventually hitting the market because of the many international projects currently under development.

Vincent Mora, project director at Steenkampskraal, said speed is essential: companies that are in first, fast track and open first will have a significant advantage.