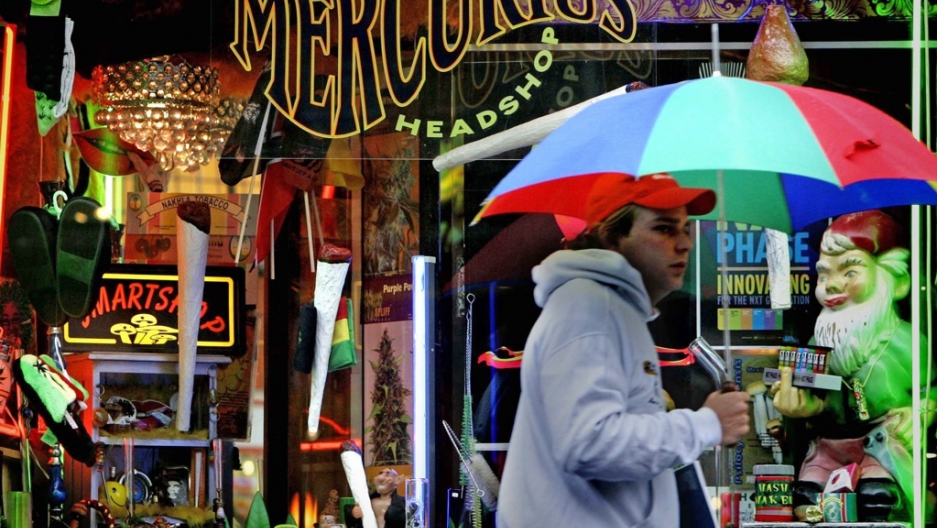 A pedestrian passes a legal cannabis head shop in 2006 in the Dutch city of Maastricht. The city has long been fed up with foreigners flocking to the town to get stoned, and cannabis cafes recently agreed to a voluntary ban on most foreign tourists.
Credit: Robin Utrecht
Share

MAASTRICHT, Netherlands — “Andrew,” a well-dressed 20-something tourist from Mauritius who declined to give his last name, was crestfallen.

He was standing outside the “Easy Going” coffee shop in Maastricht. On the door was a bright yellow notice informing visitors that as of October 1, only residents of the Netherlands, Belgium and Germany would be allowed in.

Andrew and his friends had tried anyway, only to be rejected when their documents were checked. Now they glumly accepted that, in Maastricht, they would fail to have the famous Dutch experience of smoking a joint openly in a legally tolerant environment. Instead, they would have to settle for snapshots of themselves in front of the bright neon signs decorating windows through which they could see the cannabis menus on the back wall.

“Maybe next time,” Andrew said wistfully as they wandered off.

Inside the Easy Going cafe, owner Marc Josemans lamented turning away Andrew and other tourists, who formerly made up as much as a quarter of his customers.

“It is discrimination, and I really am ashamed for it,” said Josemans, a self-proclaimed drug dealer for almost 30 years. “But we have no other choice.”

Josemans is referring to longstanding pressure on proprietors to cut back the flow of revelers, one way or another. The quaint cobble-stoned downtown Maastricht, population 120,000, draws an estimated 6,000 people each day to its 15 coffee shops. Residents agree the congestion is a nuissance. A mutually-agreed plan would relocate seven of the shops to the outskirts of town in 2013.

But Josemans, who also serves as head of the Society of United Coffeeshops (VCOM), comprising all but one establishment, complains bitterly that this agreement did not stop politicians from demanding he and his counterparts do something sooner.

“They put us up against a wall,” he said. “Our mayor says ‘if I have a chance, I will immediately put a ban on all foreigners’. My minister of justice says the same. My city council says something has to be done about the total flow of coffee-shop tourists. We had to take a form of self-regulation, and it’s better to cut off one finger of your own hand than that your enemy cuts off your whole hand.”

While it’s hard to imagine why, in tough economic times, businesses would volunteer to send clientele away, VCOM members hoped the limited non-neighbor ban would head off potentially harsher actions.

But it didn’t work. Dutch Minister of Justice Ivo Opstelten – whom Josemans casually regards as the “enemy” in this case —  has since announced an official  ban on non-residents from coffee shops not just in Maastricht, but in the nearby cities of Tilburg and Eindhoven as well, beginning January 1, 2012. Dutch residents will need carry a “weed pass” to enter.

Dutch authorities say the rest of the country will follow a year later.

It’s possible that a broader ban will never come to pass, because Amsterdam is too politically powerful for any elected official to take a stance against it.  The Maastricht city council voted against the measure itself Tuesday night, saying the city should not be a “guinea pig," but it’s not clear what effect, if any, that will have.

Josemans had initially challenged the entire concept of banning non-residents at the European Court of Justice. He insisted it was unfair to EU citizens who deserve equal access to goods and services throughout the bloc. But the court’s December 2010 decision said such a ban for the purposes of reducing drug tourism and public nuisance “constitute[s] a legitimate interest which, in principle, justifies a restriction of the obligations imposed by Community law, even under a fundamental freedom such as the freedom to provide services.”

Some disgruntled customers have called him “racist” and “fascist” but he explains to them he’s not discriminating based the color of their skin or their religion — only their residency.

Proponents of tougher restrictions contend that even if tolerance for cannabis consumption should be protected for the Dutch, the culture attracts unsavory characters from abroad and acts as a magnet for criminality — such as the consumption of harder illegal drugs.

But Josemans rejects the idea that the ban would accomplish what he calls Opstelten’s “moralistic” aims of reducing cannabis consumption, which is statistically lower in the Netherlands than in many other countries, or any other illegal activity.

The VCOM action is designed, in part, to demonstrate that a wider ban than the current voluntary one would be counter-productive. Josemans says residents have already told them there are more deals taking place in the streets, pushed out of the shops.

But Petro Hermans, an advisor to Maastricht’s mayor Onno Hoes who has worked this issue for many years, this just gives more weight to the argument that the coffee shops are bringing business that should be cut out altogether.

Hermans says the idea that there is a “parallel visitor stream” — that cannabis users are not seeking out harder drugs — is not credible with City Hall. “Border cities who appeal to a lot of foreign visitors appeal also to drug dealers who want to sell other stuff,” he said. “There are many crossovers. It’s a market.”

Hermans says those who lament losing profits should also consider costs. “Now one in five Maastricht residents says they feel insecure due to the drug problems we have — one in five,” he said. He acknowledges that this figure relates to drugs in general, not cannabis use in particular, but underscores that the administration views the two as linked.

“What would it be worth to have a reduction in that? Fifty million? A hundred million? You can’t put a figure on it.” Still, Hermans says he doesn’t know if Opstelten can collect the political capital he would need by the beginning the year to block all foreign residents from the shops.

What both sides agree on is that the Netherlands, with its long history of tolerance for open consumption of cannabis, is suffering in image and infrastructure due to the lack of realistic and responsive drug policies in other countries and the absence of EU leadership.

The Dutch may take some comfort from figures that show that their unique approach has worked for them; harder substances are not flowing as freely as in some other EU states. A recent European Commission survey showed that more respondents aged 15 to 24 in Denmark, Ireland, Portugal, Spain and the United Kingdom than in the Netherlands would find it “very easy” to get their hands on cocaine within a day.

Related: Amsterdam fights for your right to smoke pot.