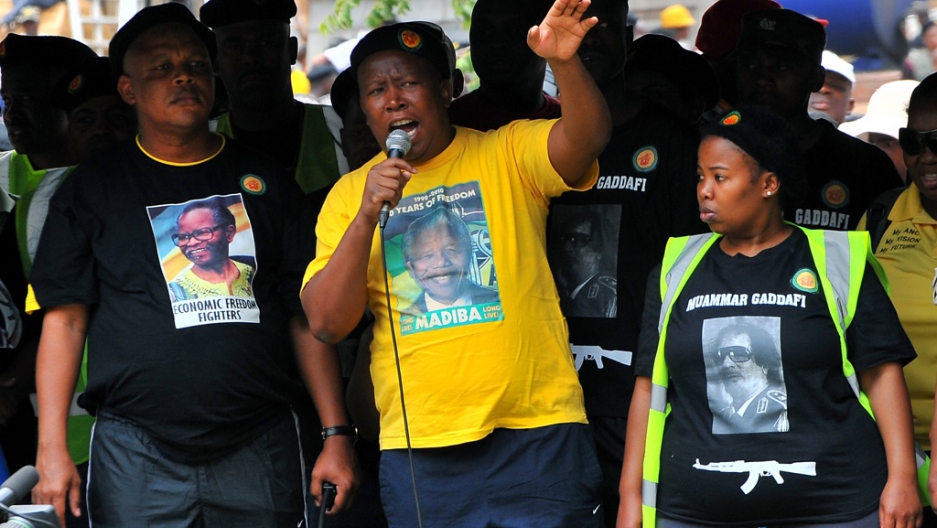 The youth wing of the ruling African National Congress (ANC) leader Julius Malema addresses militants on October 27, 2011, during a demonstration in downtown Johannesburg. He was suspended from the party in November 2011.
Credit: Alexander Joe
Share

JOHANNESBURG — In South Africa, it is a symbol of success as ubiquitous as a flashy car and a Breitling watch: a big belly, bulging like a pregnancy bump from beneath a too-tight dress shirt.

President Jacob Zuma, a Zulu traditionalist with three plus-sized wives, sports a sizeable gut and is known to shake it unashamedly while dancing shirtless at tribal ceremonies. Youth leader Julius Malema sprouted a noticeable paunch during his rise to wealth and infamy, as did the notorious Kenny Kunene, a nightclub tycoon known for eating sushi off half-naked women.

The biggest belly of all belongs to the president’s Jabba the Hut-like nephew, Khulubuse Zuma, a wealthy mining-company director who recently claimed his obesity-related health problems made it impossible for him to give evidence in mine liquidation hearings, in which his company was accused of stripping a mine of its assets, leaving workers with virtually no income for two years.

His excuse, and the subsequent outcry, has focused attention on the lifestyles of this country’s young, black entrepreneurs and political leaders, flush with new money and power — and serving as overweight role models for the country’s youth. Some South Africans are wondering: has freedom made us fat?

South Africa has an obesity rate that rivals that of the United States. According to a survey by the drug and healthcare company GlaxoSmithKline, 61 percent of South Africans are overweight, obese or morbidly obese.

The country is "eating itself slowly to death," researchers said, with South Africans of all races and economic classes becoming heavier. In Afrikaans, they call a big belly a “boep,” and it is a common sight on white farmers in safari-style shirts and tan shorts.

Salome Kruger, an obesity expert at South Africa’s North-West University, said the weight and diet problems are largely related to an emerging population of young adults having money for the first time.

“They grew up in households without a lot of money and ate mostly a boring staple diet,” she said. “All of a sudden, they have a little bit of money and can eat fast food.”

Many of these young adults are buying their first car, which puts an end to exercise from walking. And they see walking as unfashionable.

“Walking is still associated with poverty and hardship,” Kruger said.

It is arguably the rich and powerful who are setting the tone, along with cultural associations that make it seem healthy to be fat.

“Unfortunately it seems many of our politicians and other public figures are quite obese, so people see they enjoy the good life,” she said.

More from GlobalPost: Obesity: Not just a Thanksgiving problem (PHOTOS)

Health Minister Aaron Motsoaledi, who is also a medical doctor, is trying to change the oversized image of South African politicians, and has challenged his government colleagues to do the same.

"The problem is, having a tummy is regarded as a sign of male maturity. If you check, many of us are pushing something in front," he told local media.

Asked in an interview with Johannesburg’s City Press whether he thinks democracy is making South Africans fat, Motsoaledi said “absolutely.”

“Nobody exercises these days, yet we eat all the wrong foods,” he said, pointing to the fact that children used to walk miles to school, but today are driven in their parents’ cars, and upon returning home, sit in front of the TV with a bowl of chips.

There is a growing epidemic of childhood obesity, with some children also growth stunted due to malnutrition from eating poor-quality food lacking in vitamins and minerals. Among South African high-school girls, 35 percent are overweight or obese.

Medical experts are frightened by the health repercussions ahead, and the rising health-care costs from obesity-related illnesses, such as heart attacks, strokes and hypertension. South Africa’s public health-care system, which serves the country’s poor, is already overburdened and lacking in resources.

“In a couple of years we will have a huge burden of Type 2 diabetes,” Kruger said.

In South Africa, HIV/AIDS has been a dominant health issue, and other diseases with serious consequences have for years received little attention.

“HIV is such an important and emotional issue, it took a lot of resources and money,” Kruger said.