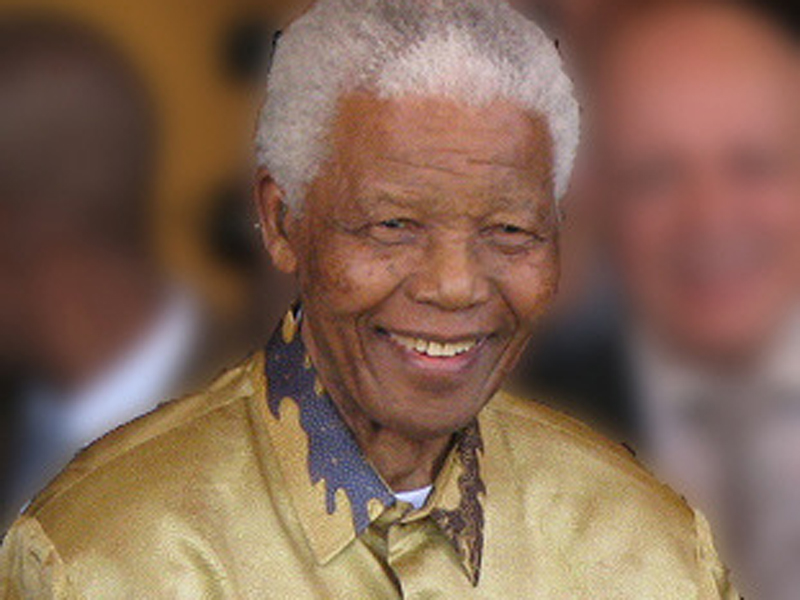 Nelson Mandela, now 93, is making fewer public appearances and many South Africans are wondering what the country's post-Mandela future will look like. (Photo by South Africa The Good News, via Wikimedia Commons, cc-by.)

Nelson Mandela, now 93, spends most of his time at home in Qunu, his ancestral homeland in rural South Africa.

The former president and anti-apartheid campaigner has made few public appearances in recent years. But Mandela is rarely far from people’s minds.

Heidi Holland, a journalist based in Johannesburg, frequently met Mandela after his release from prison in 1990 and gets regular updates on his health.

“He’s not sick,” she said. “He’s just fading away, as old men do. And he had a tough life, you know, all that breaking of rocks in the quarries at Robben Island.”

Holland has heard many people ask what will happen to South Africa when Mandela dies.

“I used to say quite glibly, ‘Well he’s been out of active politics for such a long time, it’s not going to make any difference.’ But I’ve changed my mind about that.”

Today Heidi Holland looks at the ruling African National Congress, the party of Mandela, and said it's corrupted by greed, ambition and infighting. Mandela would not have tolerated that, she said.

“I have this growing nostalgia even though he isn’t dead yet,” she said. “You just wonder where the voices of integrity will come from.”

Mandela has been the subject of criticism over the years, including for actions he took when his then-wife Winnie Mandela was in legal trouble. But nothing has threatened his stature as the father of modern South Africa, even though it’s been more than a decade since he left office.

For Muhlwa and many others, Mandela remains the country’s moral center, even though he’s absent from public life.

“The idea of Mandela, it goes and comes back,” Muhlwa said, adding that it comes back when people are talking about the most important things in their lives.

Amina Cachalia also hears people talk about what will happen when Mandela is gone.

Cachalia is a veteran of the freedom struggle, and she’s been a close friend of Mandela's for more than sixty years. She said people ask the question “as if he’s keeping us together in a way. That’s how people feel.”

Cachalia is upset at the thought of losing her friend, but she said South Africans have to face reality. Mandela will die, and there’s still work to be done.

Political freedom hasn’t yet translated into equal economic opportunity. Many young people are unemployed and angry. From afar, it could look like the Mandela's achievements has been squandered.

But that’s not how Graunt Kruger sees things.

“The era of Mandela has gone.”

Kruger works with black women entrepreneurs for one of South Africa’s major banks. He said all South Africans are ‘Mandela’s children’. But children grow up, and — as he points out — many have accomplished great things.

“The ANC, the South African government, South Africa as a country [all] grew leaps and bounds beyond Mandela and probably beyond what his wildest expectations even were.”

Kruger said South Africa’s institutions have matured since Mandela stepped down. He believes the country is well-placed to meet its current challenges.

Indeed, Kruger wonders if the focus on Mandela is more for people outside the country. South Africans themselves can’t afford to get nostalgic. There’s too much to do.

But there are some, like Cachalia, who are adamant that South Africa mustn’t forget the lessons of Mandela and his generation.

“I think our leadership has to buck up” she said. “The examples have been set for them. The struggle’s been won in a way, and yet there’s a great struggle ahead for us.”

It may be impossible to live up the standards set by Nelson Mandela. But Cachalia said South Africans must try.