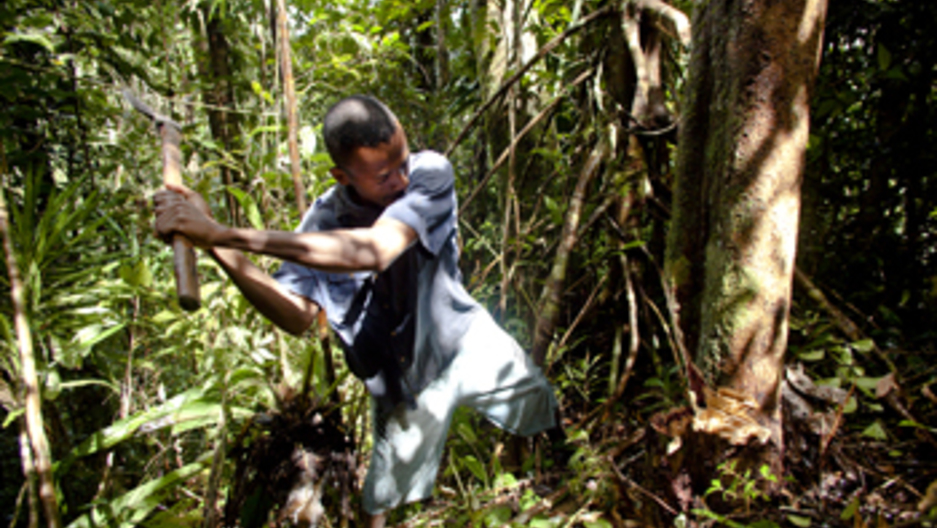 A protected rosewood tree is cut down inside Masoala National Park in Madagascar in 2009. (Photo by Toby Smith of the Environmental Investigation Agency.)

Story from Living on Earth. Listen to above audio for a complete report.

The Lacey Act is the oldest wildlife protection law in the United States.

Signed by President William McKinley in 1900 to regulate the trade of rare animals across state lines, over the years it has been amended many times and in 2008 made it a federal crime to trade in illegally harvested plants.

A year later, U.S. Marshals raided the Gibson Guitar Company in Tennessee and accused it of using exotic hardwood trees in its guitars. It's that raid which caught the ire of Tea party activists and led two U.S. lawmakers from Tennessee to try and ammend the law and protect the guitar maker.

Andrea Johnson, Director of Forest Campaigns for The Environmental Investigation Agency, has been probing the guitar case and was invitied to Madagascar in 2009 to investigate the illegal logging there. The Justice Department said the illegal woods at Gibson came from Madagascar.

"We went on the ground; we looked at the situation. We, then, traced the trade - we looked at where is this stuff going because nobody in Madagascar is building their houses out of ebony and rosewood," she said. "This is one of the poorest countries on earth, and 100 percent of the illegal wood that is coming out of those national parks is for the export trade."

In her research, Johnson discovered wood going to China and Europe, and from Europe to Gibson Guitars in Tennessee, she said. Gibson Guitar vehemently denies that's the case and says it's actually in favor of the Lacey Act — but that it needs to be fixed.

"It’s an interesting concept that when you are investigated under a law, your response - instead of going through the due process that the American justice system affords you to prove your innocence - you instead "fix" the law so that you, presumably, would not be subject to it again," Johnson said.

The Lacey Relief Act, introduced by Democrat Rep. Jim Cooper and Republican Rep. Marsha Blackburn, both of Tennessee, seeks to carve out an exemption to the law for products imported to the United State prior to the 2008 amendment.

Johnson said it would dramatically reduce the penalities as well.

"Right now, if the government can knowingly prove that a company imported illegal timber, they can receive fines up to half a million dollars and even jail time," she said.

The new penalty for first-time offenders would be $250. The bill would also prevent government seizures of illegal products.

"I believe in, I believe in cutting trees. I think it can protect forests if done right, but the way that forestry is being done in Peru and Indonesia, in Russia, in so many places, is robbing these countries," Johnson said. "It’s a crime and it’s a shame, and the world is watching the U.S. right now."

Hosted by Bruce Gellerman, "Living on Earth" is an award-winning environmental news program that delves into the leading issues affecting the world we inhabit. More about "Living on Earth."