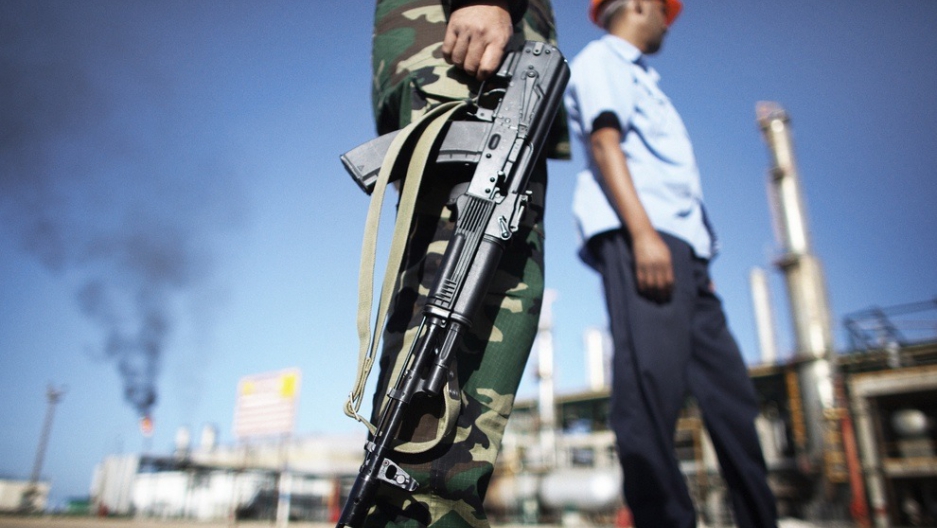 TRIPOLI, Libya — The biggest challenge facing Libya’s transitional government may also be its greatest blessing: what to do with all the oil.

Libya is awash in black gold.

With about 46 billion barrels of proven oil reserves — and much of the country still unexplored — Libya ranks as the world’s 18th largest oil producer, and the largest on the African continent.

That was before the revolution that ousted leader Muammar al-Gaddafi. Production amid the conflict has since slowed.

But as the pumps crank back to life and international companies return, the government must balance its need to get the oil back in the pipelines — and manage the expectations of a people who have waited decades to see its benefits.

Prior to the revolution, oil was being produced at a rate of 1.6 million barrels per day, or bpd. As the conflict between Gaddafi loyalists and the rebels escalated, production slowed and then ceased completely in May.

Drilling resumed in September, as the rebels gained control of Tripoli, but on a limited scale. Since then, output has steadily increased to the current rate of 550,000 bpd, according to the National Oil Company.

"We are way ahead of our own expectations, of anybody's expectations,” said Ali Tarhouni, Libya’s oil and finance minister. A former economics professor from the University of Washington, Tarhouni said he expected to pass 700,000 bpd by the end of the year. By June, he expected Libya would be producing at pre-conflict levels.

The International Energy Agency, in a report released Thursday, said that might not happen until 2013.

That may not be fast enough for Libyans, who are eager to see change under their new post-revolution government.

People have begun to anticipate rapid improvements in healthcare, education, employment opportunities. They expect that the benefits of Libya’s oil wealth will be shared among the population.

Tarhouni said fulfilling these dreams is the biggest challenge the new government is facing. Progress, he said, would be slow until Libyans can elect a permanent government. Elections are to be held in June next year.

In the meantime, Tarhouni said the transitional council aims to privatize much of the oil sector, which had been run by the government under Gaddafi.

"The private sector should be the engine for the future economic development of Libya," he said.

Masaoud Mohamed Yousef, who has worked in oil industry management with the NOC since 1978 and is now the chairman of Mafaza Oil Technical Services, said prior to 2004, government restrictions made it impossible for all but a “handful of lucky, very well-connected people” to open private business within the oil industry.

More from GlobalPost: Gaddafi is dead. Who cares?

Restrictions were relaxed somewhat in 2004, but Yousef said it took a lot of work to make a living under the old system.

Yousef said although the new government will have its concessions, most production will be handled privately.

“There is no choice for them but to change the system — otherwise these young people who made the revolution will not stand for it,” he said, adding that new polices will mean huge potential for the private sector in the future.

“It will take time, but we’ve waited 42 years, we know how to be patient.”

International companies in the game

British Petroleum looks set to become Libya’s biggest oil investor if the oil company continues with a contract negotiated with the former regime that was halted due to insecurity at the beginning of the year.

It is not yet clear if or when BP will begin production but the majority of foreign investors are aiming to start in January of next year if the security situation in Libya remains stable.

It’s no coincidence that the major oil companies are also members of NATO, which provided key military support to the rebels as they battled Gaddafi’s forces.

“Even if they don’t say it loudly of course they have the best chance for future investment,” Yousef said. “Russia and China clearly do not have an equal standing in negotiations for oil contracts with the new government,” he said.

Russia and China abstained from the UN resolution authorizing NATO intervention — allowing the vote to proceed but not offering their support for the operation.

Tarhouni said negotiations for new oil concessions are likely to be delayed until after the elections.

Fears of insecurity have discouraged many existing international investors from returning.

A large number of heat-seeking missiles that have not been recovered from Gaddafi’s forces pose a particular threat to the recovering oil industry, a likely target for Gaddafi loyalists, Suwi said.

“When the international companies come they will come all together, but for now we remain on standby,” he said.

Yousef said management disputes and a lack of organization within the national oil company have further delayed production.

Many workers have been reluctant to return under former regime managers, but Yousef expressed confidence that the transition would not take long as this is the one area of Libya’s economy that has been well developed.

“There is a very clear and effective system in place within Libya’s oil industry,” he said. “Gaddafi played with everything. He destroyed everything, but he never touched the oil companies. His power came from oil.”

Libya’s oil refineries and rigs suffered little damage during the conflict, Yousef said, and there are backups of the stations that were destroyed.

The main loss for international companies was in property and vehicles. Camps, accommodation, and support units were destroyed. Vehicles were taken by both Gaddafi troops and rebel units.

“These things can be easily replaced,” Yousef said. “The main components for production are still in place.”

Though the lack of production over the past eight months has been a big financial loss to Libya and oil industry workers, the benefits outweigh the sacrifice he said.

“Although our income stopped and we spent our money [to make this revolution] we are so happy,” he said. “We have hope now, not only for our futures but for our children and our grandchildren.”

Highlights of GlobalPost's coverage of Gaddafi's capture, killing and beyond.