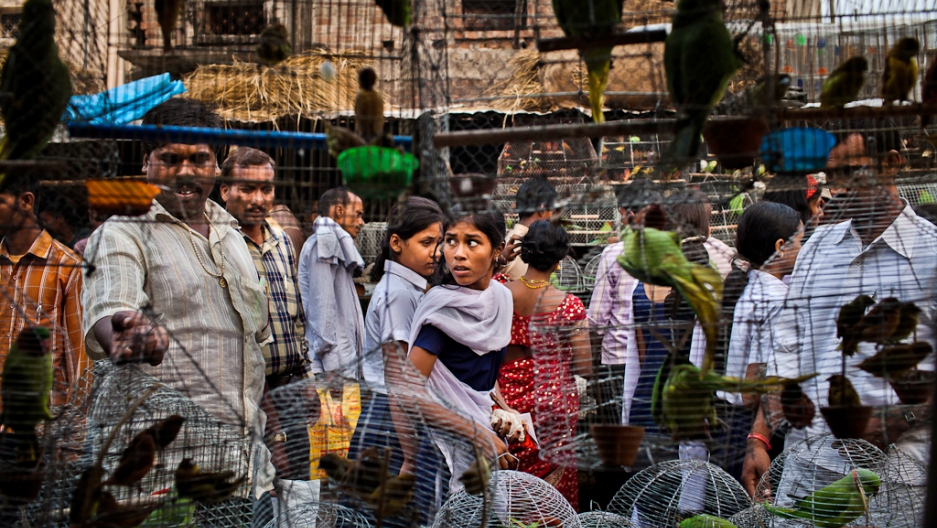 People walk past cages with birds for sale at a market during the Sonepur Mela in Sonepur near Patna, India. Nov. 16, 2011.
Credit: Daniel Berehulak
Share

NEW DELHI, India — America's renewed focus on Asia puts India in a pivotal position to increase its influence in the region and around the world. But that increased stature also comes fraught with risk.

This week, U.S. President Barack Obama reversed two decades of policy drift, marking an “emphatic return of the United States to Asia's center stage,” according to C. Raja Mohan, a senior fellow at New Delhi's Center for Policy Research. And the stakes could be even higher than during the Cold War.

India: Self-immolations spread from Tibet to the diaspora

“As the U.S. begins to deal with this challenge, there's bound to be an arms race and more militarization of the region, and China is bound to respond,” Mohan said. “This is going to produce a whole different set of alignments, new confrontations and new tests for the entire region.”

Following an announcement that the U.S. would open a new military base in Australia and the forceful claim that America is “here to stay” as a “Pacific power,” Obama landed in Indonesia to join the East Asian Summit for the first time on Friday.

At the invitation of the Association of Southeast Asian Nations (ASEAN), the U.S., along with Russia, implicitly enters the multilateral forum to add some much-needed muscle in the wake of China's efforts to enforce its claims on the disputed South China Sea.

“The fact that they invited the US itself was a recognition that if you are in a cage with an 800-pound gorilla, you should at least invite another one into it to provide a balance,” said Mohan.

Meanwhile, along with Australia, Japan, Malaysia and Vietnam, Washington is backing the so-called Trans-Pacific Partnership as an alternative to the China-led “ASEAN Plus Three” scheme for regional economic integration.

Related: India, China face off in the East

The resulting shakeup in alignments could offer a tremendous opportunity for India, which is seeking to expand its influence in Asia through its so-called “Look East Policy.” But that opportunity is not without risk.

America's shift from Afghanistan to Asia will make India an even more attractive “strategic partner” for the U.S. The other Asian nations' rising fears of Chinese aggression offers a new role for New Delhi as a hedge against Beijing as Singh tries to push forward with a free-trade agreement with the countries of ASEAN.

However, India cannot afford to embrace the American agenda so fully that it aggravates growing fears in China that it is part of a U.S.-led containment strategy, or present the impression that it is ganging up with Asia's smaller nations to close China out. Already, India has gone nose-to-nose with China over an oil-drilling pact with Vietnam in the disputed South China Sea, and deployed three Brahmos cruise-missile regiments along its border with China following a number of Chinese incursions and provocations. Soon, New Delhi will recruit 100,000 new soldiers for posting along the same frontier.

In that context, Indian Prime Minister Manmohan Singh's consecutive meetings with Obama and Chinese Premier Wen Jiabao on Friday morning gave some indication of the tightrope that New Delhi will have to walk.

Thus, following weeks of heightened tensions over India's move to pursue joint oil projects with Vietnam in parts of the South China Sea, to which Beijing lays claim, Singh was careful to emphasize that India's nascent engagement with ASEAN would not come at China's expense. Singh told Wen that India wanted to pursue “the best of relations” and pointed out how, on issues like climate change, the two nations had cooperated to their mutual benefit on the global stage.

Yet just a few minutes before, the Indian leader was endeavoring to tighten the U.S. embrace. Meeting with Obama, he offered concessions on a nuclear liability law that U.S. firms say will prevent them from capitalizing on the landmark civilian nuclear pact that kicked off the strategic partnership in 2008. In other words, Singh pushed forward the very deal that first convinced Beijing that he was signing on to a secret containment pact.

Call it the new non-alignment.

Just as during the Cold War, when India was a leading figure in the Non-Aligned Movement of countries that tried to avoid joining the U.S. or the Soviet Union, New Delhi will try to steer a middle path between the world's new superpowers. But even during the Cold War, when India could do little but sit back and watch, being non-aligned never meant total neutrality. The U.S. moves to back Pakistan in the 1950s propeled India to "non-align" itself toward Russia — which supplied the bulk of its weapons for decades. And the new non-alignment could be just as tricky.

“India's relationship with the Soviet Union was driven by the Sino-Soviet split and Sino-Indian differences, so there was a balance of power element to India's relationship with Russia,” said Mohan. “If China continues to be hostile to India's interests in the subcontinent, or is unwilling to make reasonable approaches to settling the border dispute, then you can visualize a scenario where India may be non-aligned, but it does more things with the U.S.”