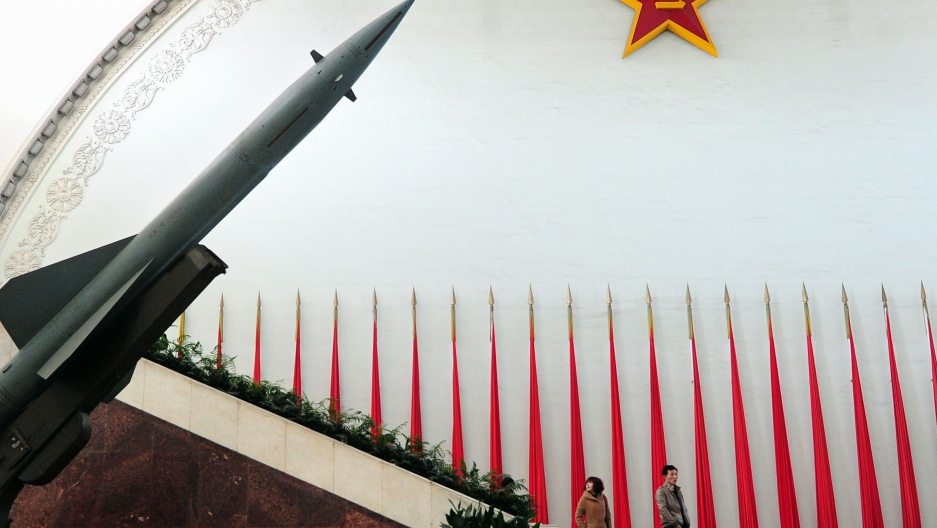 A couple walk beneath a Chinese-made Hongqi-2 missile on display at the Military Museum in Beijing on March 4, 2011. China has announced a double-digit increase in its secretive military budget but insisted the annual outlay of more than $90 billion posed no external threat despite concern worldwide.
Credit: Frederic Brown
Share

Obama, who made the promise during a speech to the Australian parliament on Thursday, said the move shows that the United States is making the Asia-Pacific region a top priority. The troop announcement has been widely interpreted as a symbolic counter-balance to China’s fast-growing clout and aggression in the region.

Notably, the US troops would be placed out of Chinese missile range and away from America’s traditional military posts in the region.

Related: Australians divided over more US troops Down Under

China has saved some of its strongest rebukes for Australia for its part in agreeing to the plan. The state-run People’s Daily newspaper lambasted the scheme, warning Australian leaders against getting in the middle of a conflict.

“Australia surely cannot play China for a fool. It is impossible for China to remain detached, no matter what Australia does to undermine its security,” the paper wrote in an editorial. “If Australia uses its military bases to help the US harm Chinese interests, then Australia itself will be caught in the crossfire.”

In a markedly different tone, Chinese Premier Wen Jiabao told Southeast Asian leaders at an ASEAN conference on Friday that China has no ill intentions toward other countries in the region. Wen didn’t mention ongoing regional tensions over China’s newly aggressive claims over territory in the South China Sea.

“The China-ASEAN relationship is solidly based and has great potential and a promising future,” Wen said, according to a statement posted on the Chinese government’s official website.

“China will forever be a good neighbor, good friend and good partner of ASEAN,” he promised. “We will work closely with you to implement all the agreements we have reached to bring more benefit to our people and make greater contributions to peace and prosperity in our region.”

China was also full of speculation as to why Obama made the announcement. Some experts said the Obama administration was anticipating pre-election pressure to be tough on China, others said that American officials genuinely fear China’s vast military build-up.

Military expert Peng Guangqian told the Global Times newspaper that fearing China’s rise, the US had stopped being polite and started acting illogically.

But other analysts and Chinese academics said the troop deployment is not quite as serious for China as it might seem.

“The United States can do anything as long as it's not against international law,” Xing Yue, international relations specialist at Beijing’s Tsinghua University, said in an interview. “They have the right to deploy as long as Australia agrees to it. They're allies, after all.”

China: Self-immolations spread from Tibet to the diaspora

Zhang Jiadong of Shanghai’s Fudan University said the decision marks a fourth “pivot point” for the US power struggle against China in Asia, adding Australia to the list along with Japan, South Korea and the Philippines.

“This makes it clear the US is trying to contain China, even at the cost of military conflict,” Zhang said. “I'm not saying it's a particular goal, but it is certainly a gesture.”

“I don't think the US is targeting China alone,” Zhang added. “It's worried about the integration of the whole East Asia. External power will be elbowed out if the integration process led by China is complete.”

Separately, speaking to a group in Beijing on Friday, US Ambassador to China Gary Locke said the United States and China must deepen their engagement on security issues, including stronger military ties.

“For 40 years, our two countries have been increasing our cooperation and interconnectedness for a very simple reason: it is in our mutual security interest,” said Locke.

“The United States and China share an interest in maintaining peace and prosperity around the world. There are few global problems that can be solved without China’s active and positive participation.”