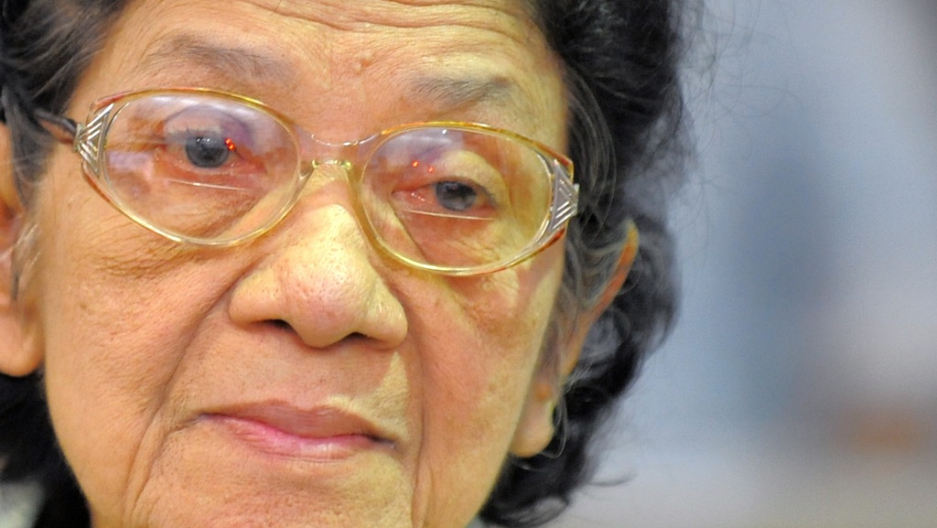 Former Khmer Rouge member Ieng Thirith is not fit to stand trial for genocide and other crimes, a United Nations-backed court ruled Thursday.

The judges have ordered her release, reported Agence France Presse. Prosecutors have 24 hours to appeal the decision.

The 79-year-old has been diagnosed with Alzheimer's disease which has diminished her mental capacities, the Associated Press reported.

"Trial and continued detention of an accused who lacks capacity to understand proceedings against her or to meaningfully participate in her own defence would not serve the interests of justice."

Thirith was Minister for Social Affairs under Cambodia's 1975-79 Khmer Rouge regime, under which an estimated 1.7 million Cambodians were killed. She was also the wife of the regime's Foreign Minister Ieng Sary, and sister-in-law of its leader Pol Pot.

Prosecutors say she was involved in the "planning, direction, coordination and ordering of widespread purges [...] and the unlawful killing or murder of staff members from with the Ministry of Social Affairs," according to a court filing seen by the AP.

She was due to be tried for genocide and war crimes at the UN-backed Khmer Rouge tribunal, alongside Sary, former regime leader Nuon Chea, and the regime's nominal head Khieu Samphan.

More from GlobalPost: Hidden truths in the Khmer Rouge trial

Her attorney, Diana Ellis, told the court last month that Thirith was unable to recall the crimes she is accused of committing, reported Voice of America. Medical experts found she was unable to recognize her own house.

Chea and Sary have been judged fit to stand trial, said VOA, despite suffering from a number of physical problems. Samphan declined to submit to medical examination, and so will also be tried.

The trial, due to begin on November 21, will be the tribunal's biggest to date. The court proceedings have taken five years and $100 million to get underway.

Time is key if the elderly defendants are to be tried, according to VOA:

The court struggles with accusations of political interference and the broader fear that it will be unable to try the four defendants before they are too old or infirm.

Cambodia's prime minister, Hun Sen, said last year that he would not allow any more Khmer Rouge war-crimes trials after this one.