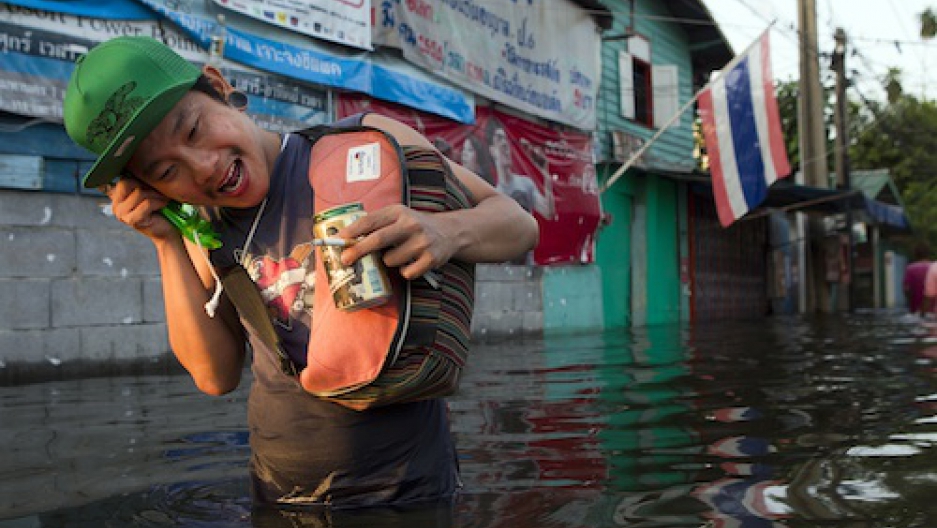 A Thai man answers his phone, while holding a beer and a cigarette, as he wades along the flooded streets in the Thonburi area October 31, 2011 in Bangkok, Thailand.
Credit: Paula Bronstein
Share

Thailand could use a beer.

With scummy floodwaters still two weeks away from fully draining into the sea, Thais are still coping with reeking neighborhoods and soggy commutes.

But it's getting harder to wash those troubles away with a cold one. Many Thais reaching for the beer shelf in a 7-11 or mom-and-pop store have found themselves disappointed.

Several factors have conspired to cause Thailand's ongoing beer shortage.

1. Many of the factories producing beer also produce bottles of its primary ingredient: water. Those plants have had to devote more resources to pumping out bottled water, which is badly needed in flood zones.

2. Several beer/water factories lie within the industrialized region outside Bangkok that has suffered some of Thailand's worst flooding. According to The Nation newspaper, two major facilities have stopped operating. An upstart blog in Thailand's northeast, the Isaan Record, says factories hundreds of miles away are forced to pick up the slack.

3. Like other goods, beer is difficult to distribute when many roads are waist deep in mucky water.

In Thailand, where 6 percent of GDP is derived from tourism, beer is more than an idle pleasure. It's big business.

If bars and hotels continue running short of stock, the entertainment industry could "start showing real signs of crisis," according to a Phuket business association chief speaking to CNN. The popular getaway island, far flung from Bangkok, is experiencing inflated prices and a "beer crisis," reports the Phuket Gazette.

In central Bangkok, however, beer is easier to find despite certain shops running dry for a day or two.