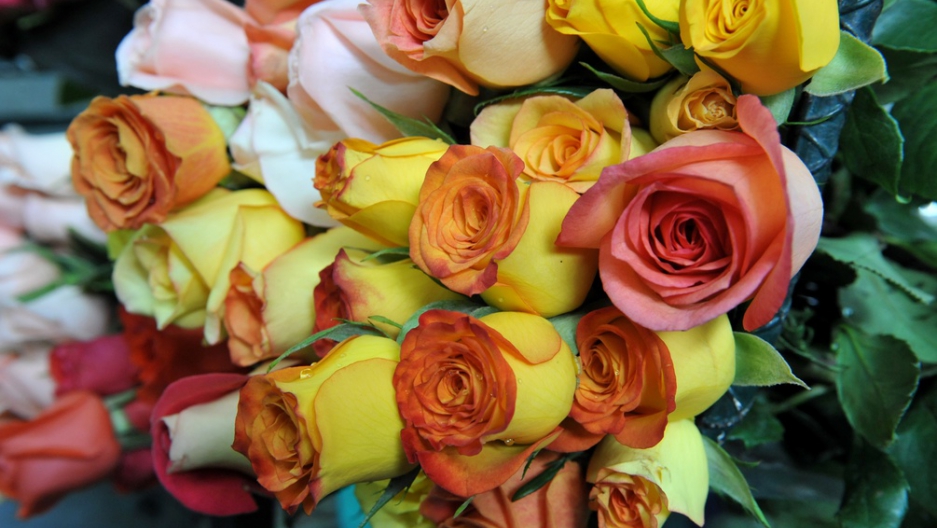 These are pretty, but at what cost?
Credit: GUILLERMO LEGARIA
Share

BOGOTA, Colombia — For two years, Hugo Moreno, 44, worked in the same flower plantation on the outskirts of Bogota, Colombia's capital city. Like thousands of other flower workers he would wake up, take a rickety old bus to work, and spend the day cutting flowers that would later be shipped to America.

Moreno says the work was tough, but they were paid on time and received social security. “Most of the workers were just happy to be in a job,” he told GlobalPost. Then one day, the plantation owners suddenly stopped paying their salaries.

“We already get paid nearly nothing, when they stopped paying, it ruined us,” Moreno said.

Moreno contacted Untraflores, a small independent union set up to protect flower workers. They explained his legal rights, and Moreno was inspired to organize a strike.

Within hours of the strike starting, over fifty heavily armed police stormed the compound, beating the protestors with truncheons and firing tear gas, Moreno said. Seven people, mainly women, had to receive treatment for serious wounds.

The Colombian police refused to comment on the incident, saying an investigation was still in process. The plantation has since closed its doors.

“We did not do anything wrong,” said Moreno, who said he was one of those sprayed with tear gas. “We were just peacefully protesting to regain what was rightfully ours.”

This is the dark side of Colombia’s labor force, which some fear will be made worse by a free-trade agreement signed last month between the United States and the Latin American nation. Colombia ships 80 percent of its flowers to the United States, which is now expected to increase. The deal, the US and Colombian governments said, will boost both economies amid the fallout from the global financial crisis.

But critics in Colombia say that now that the free-trade agreement has been signed, and there is more money to be had, employers and the government will have little incentive to improve the situation.

Colombia again ranked the deadliest country in the world for trade unions last year by the International Trade Union Confederation, with 49 murders recorded.

Already this year, 24 trade union members have been murdered, and dozens more have been harassed, and a few tortured for their involvement with trade unions, according to CUT, a local trade union.

“Colombia suffers from a terrible anti-union culture,” said Luis Alberto Vanegas, a human rights expert at CUT. “America should have waited for more improvements before signing the Free Trade Agreement.”

Under the agreement, duties were immediately dropped on 80 percent of consumer and industrial goods exchanged between the United States and Colombia. All remaining tariffs will be phased out in five to ten years.

Supporters of the agreement say that the reduction in tariffs will allow the United States to import more Colombian flowers, thereby boosting the Colombian flower industry. They say that once the companies are more profitable, they will be more willing to offer better worker compensation and conditions.

Colombia’s labor unions, however, say that the trade agreement will funnel benefits only to major companies, not the workers.

And critics say employers will continue to treat employees the same way they have been, and be allowed to increase their profits even more without improving work conditions.

Human-rights groups have long alleged that the government intelligence agency, DAS, has killed trade union leaders who they accuse of having links with leftist guerillas, the FARC. “They're not rebels, they're just trying to stand up for workers rights,” said Vanegas, adding that the trade union leaders killers are rarely, if ever, found.

Advocates note some improvements over decades of poor conditions. Children are now rarely hired to work on the plantations, and some employers use machines to ease the strain on the workers’ wrists.

But Aide Silva the director of Untraflores said conditions overall have worsened for flower workers.

“More and more employers are trying to get their workers on temporary contracts,” she said, which offer no benefits or job security. “Now more than ever, workers are dealing with insecurity and lack of social security.”

Silva's next appointment that day was with 44-year-old flower worker Idalba Madrid. Like most flower workers she is a single mother, and has worked cutting flowers for more than 13 years. For the last five years she worked on the same plantation, which just barely helped her provide for her two young children.

Like many flower workers, as a result of long hours, especially ahead of Valentine's Day, Madrid has developed arthritis and minimal mobility in her right wrist. Then, earlier this year, her employers cancelled her social security without warning.

“Before I was just about able to survive, but now it’s impossible to pay my medical costs, and look after my children,” she said.

She raised the issue with her boss after consulting with Untraflores. Her bosses threatened to fire her for complaining, she said. The next month, she was fired, and asked to sign a temporary contract instead. She refused.

The company has since closed down, and the owners couldn’t be reached to comment.

Madrid said she’s been blacklisted for her union ties, and can’t get a new job.

“Look at me now. I am so demoralized that I cannot even cook or clean my home,” Madrid said. “If trade unions were allowed to function properly in this country I never would have ended up like this.”