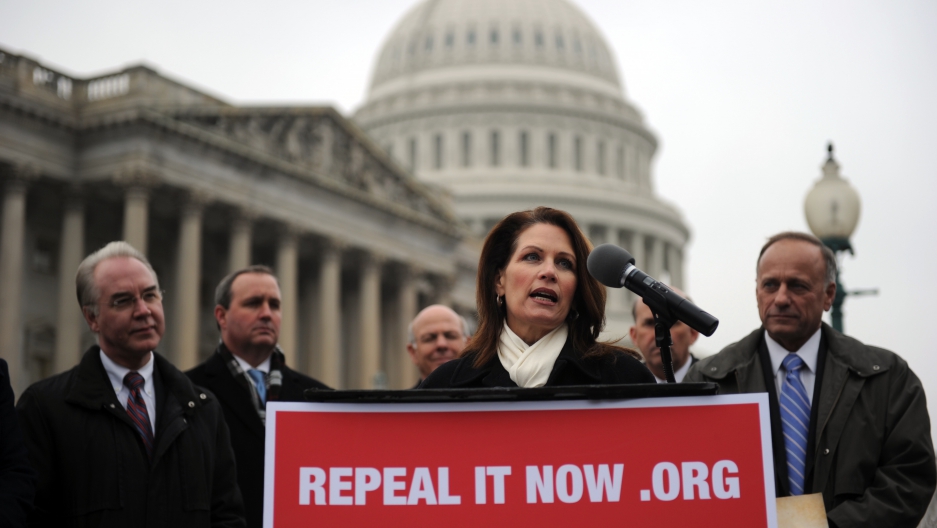 US Representative Michele Bachmann (C) calls for the repeal of the Patient Protection and Affordable Care Act during a press conference on Capitol Hill in Washington, DC, on Jan, 18, 2011.
Credit: TIM SLOAN
Share

A majority of Americans want to scrap the Patient Protection and Affordable Care Act, a Gallup poll released today reveals. The survey found that 47 percent of Americans want to get rid of President Barack Obama’s healthcare overhaul, while 42 percent want to keep it, the Los Angeles Times reported.

At the same time, the poll found that the percentage of Americans who prefer private insurance had dropped, from 61 percent to 56 percent, in one year, the L.A. Times reported. Thirty-nine percent of respondents said they preferred a government-run system, up from 34 percent.

According to the Boston Globe:

The findings come after the Supreme Court announced Monday that it would review the constitutionality of the law, most notably the requirement that nearly every American buy health insurance starting in 2014 or pay a penalty. A decision is expected to come in June, which, just four months before the general election, could conceivably bolster or bruise Obama’s reelection bid.

Republican Sen. Chuck Grassley of Iowa has asked Chief Justice John Roberts to break with protocol and provide live audio and video coverage of the Supreme Court healthcare reform review, CBS News reported. Today, House Democratic Leader Nancy Pelosi said she agreed with the request. "When the Affordable Care Act is placed before the highest court in our country, all Americans will have a stake in the debate; therefore, all Americans should have access to it," Pelosi said in a statement, according to CBS News.