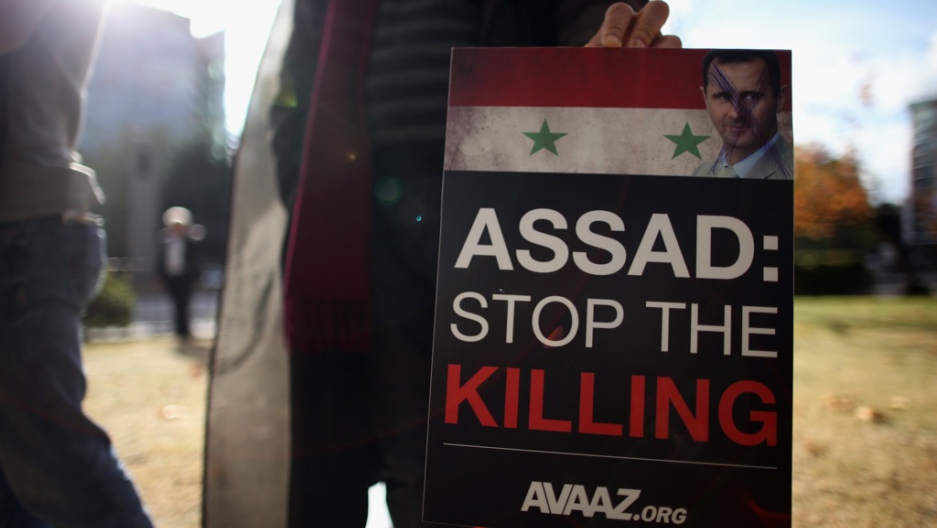 Syrian protesters make their way down Edgeware Road to the Syrian Embassy on October 29, 2011 in London, England. Amnesty International activists and Syrians living in the UK are to hold a 'No More Blood - No More Fear' rally outside the Syrian embassy to call for an end to the government crackdown in Syria, which has killed at least 3,000 people.
Credit: Dan Kitwood
Share

Turkey has become Syria’s latest neighbor to voice disapproval against the regime’s violent government crackdown on the opposition.

"No regime can survive by killing or jailing," Turkish Prime Minister Tayyip Erdogan said. "No one can build a future over the blood of the oppressed."

More from GlobalPost: Turkey: Van a “ghost city” after quakes

Syrian President Bashar al-Assad has killed more than 3,500 government protesters since mid-March in an attempt to squash the Arab Spring movement that has already toppled leaders in Tunisia and Libya and threatens heads of Egypt, Yemen and Syria.

The latest reported incident of clashes occured in Syria's southern province of Deraa when more than 30 Syrian troops were killed by suspected army defectors, the BBC reported. Security forces killed 27 civillians in the same area.

Attacks have also spilled into embassies in Damascus.

Turkey evacuated its diplomatic staff and family members Saturday in Syria after Assad sympathizers tried to break into the Turkish embassy in Damascus. Multiple embassies from countries critical of the Syrian government have become recent targets for attack.

Erdogan addressed Assad disrespectfully by his full name and said: "Bashar, you who have thousands of people in jail, must find the culprits and punish the," the Associated Press reported.

More from GlobalPost: Tens of thousands protest in Syria

The government-led crackdowns in Syria have drawn criticism and disapproval from members of the international communities, as well as Assad’s Arab peers.

Jordan’s king Abdullah urged Assad to step down from power on Monday, telling the BBC: "If Bashar has the interest of his country, he would step down, but he would also create an ability to reach out and start a new phase of Syrian political life.”

Abdullah’s comments come in the heels of the the Arab League’s decision to suspend Syria’s membership after the country failed to carry out a peace deal brokered by the League that sought to end violence against the opposition.

Western leaders have supported the League’s move in addition to taking their own actions.

With Assad’s power teetering on a precipice, the Syrian National Council, Syria’s opposition group, has been gaining political traction. The Arab League have recognized the group as a legitimate power and invited the council to meet in Cairo Tuesday.