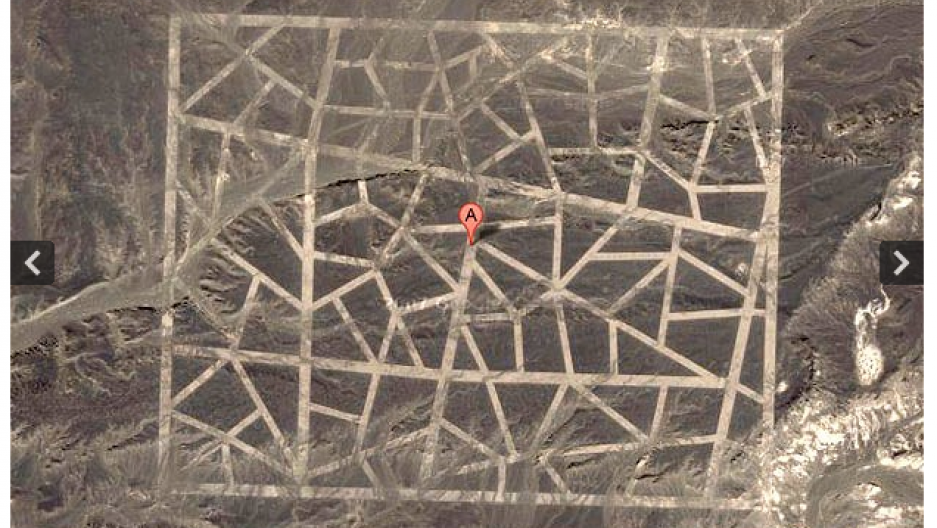 Google Earth image near the borders of Gansu province and Xinjiang, some less than 100 miles from the headquarters of China's space program.
Credit: Telegraph
Share

This is pretty bonkers.

According to a news report, there are enormous and totally terrifying-looking structures in the middle of the Gobi desert that nobody has any idea about.

The Telegraph, which has the news report and pics, says that Google Earth originally identified the structures, which are located on the borders of Gansu province and Xinjiang, relatively close to the headquarters of China's space program..

It's the kind of news report that contains passages like:

... reflective rectangles up to a mile long can be seen, a tangle of bright white intersecting lines that are clearly visible from space ...

... an array of metallic squares littered with what appears to be the debris of exploded vehicles while another shows an intricate grid that is some 18 miles long ...

In other words, scary passages.

Nobody know what these structures are, though the Telegraph suggests that they might be "optical test ranges for Chinese missiles," modeled after street grids in existing cities.

To be sure, no one is arguing that China could beat the United States in a full-out conflict. U.S. military spending, war-fighting experience and technology vastly outmatch China's. That would make any war between the world's sole superpower and its rising challenger a lopsided, if devastating, fight.

But that doesn't mean China is out of the running either.

News of stealth fighters and drones out of Beijing is hardly surprising.

China's military is advancing, and the covert nature of their operations — like, say, hiding things that are 18 miles long in the middle of nowhere — make it very hard to know how scared we should be.

What we do know is that we should be scared.