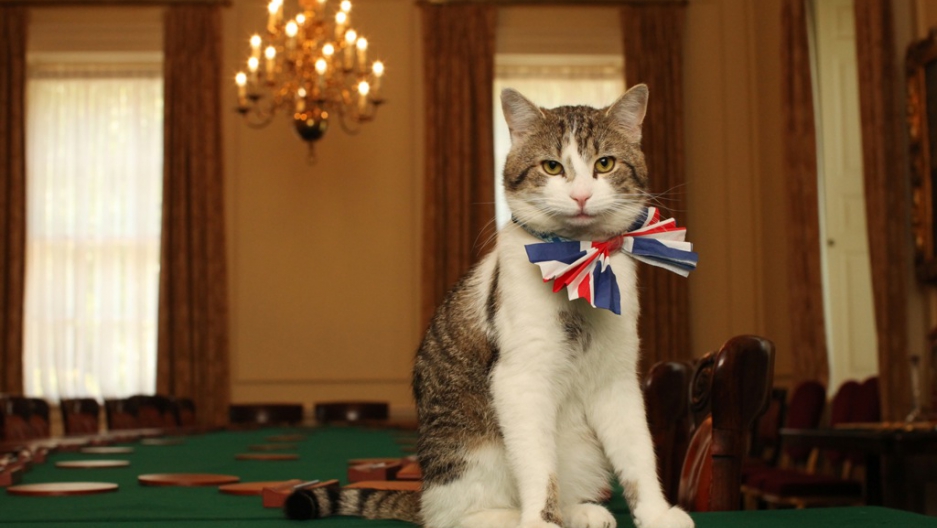 Larry the cat has gone from life on the streets to a high-powered job with the British prime minister - but it seems he's not doing his duties.
Credit: James Glossop
Share

His critics say he's lazy, eats too much, sleeps on the job and would rather spend time with a "female acquaintance" than carry out his official duties.

The civil servant in question is no expenses-fiddling MP, but a four-year-old rescue cat named Larry.

Downing Street was forced to defend its feline resident after rumors of mouse sightings at the prime minister's official dinners.

Larry was nowhere to be seen when a mouse appeared at a recent dinner between David Cameron and his cabinet ministers, Agence France Presse said, leaving the PM to throw a fork at the intruder.

Chief mouse-catcher Larry has been neglecting his hunting duties in favor of sleeping or hanging out with a furry female neighbor, according to unnamed aides cited by the Daily Mail.

The slurs prompted speculation that Larry might be relieved of his duties - a possibility which a Downing Street spokesperson ruled out Monday, saying:

"Larry brings a lot of pleasure to a lot of people."

He added that Larry has previously shown "a very strong predatory drive" and enjoys playing with toy mice, said the BBC.

Larry was brought in when a rat was spotted outside the door of the prime minister's residence during a live TV broadcast. He was chosen specifically for his hunter's instinct, honed during his early years on the streets of London.

He caught three mice in his first four months on the job, but his tally has since slackened off.

Larry might have to try harder if he wants to avoid the fate of his most famous predecessor, Humphrey, who served under Margaret Thatcher and John Major before being abruptly retired by Tony Blair, reportedly because Cherie Blair took against him.