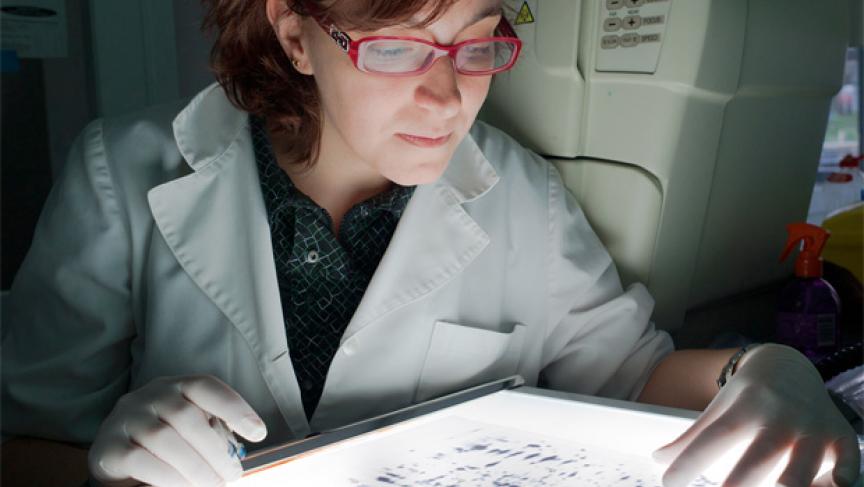 Elena Gonzalez — a geneticist at the Natural History Museum in Madrid — is finding ways to tell different populations of fish apart. (Photo courtesy of FishPopTrace.)

The fish market in Madrid, Spain, is the second largest in the world. Only Tokyo's is larger.

At 6:30 in the morning, vendors display fish that only yesterday were on a boat in Chile or the United States. Tomorrow those fish might end up at a restaurant in China.

Inspector Felicísimo Perez Fraile makes sure nothing is being sold that shouldn’t be, like endangered species. When a fish comes in all chopped up with no head, scales or fins, it can be hard to know what he’s looking at, but he can confirm what kind of fish it is by sending a sample off to the lab.

But there's no way to tell where the fish came from – which sea.

It’s an important question because certain species are overfished in some places and sustainably caught in others. It’s hard for regulators to protect endangered populations when labels can be faked and the fish look the same.

In 2008, the European Union launched a program called FishPopTrace, which looks to science for an answer.

The 15 FishPopTrace labs are spread across Europe. One of them is on the other side of town, at the Complutense University of Madrid.

Elena Gonzalez, a geneticist who did her doctoral research at the university, has extracted proteins from the livers, brains, muscles and hearts of four commercial fish species found in European waters: hake, cod, sole and herring.

Gonzalez shows me the results of her research on a computer screen. A dark square is filled with glowing lights.

“It’s like stars in the sky,” she said, describing the image. “It’s full of spots of different colors – green and yellow and red.”

Those spots represent fish proteins, visualized using a laboratory technique. The proteins come from the brains of two different hake – one from the Bay of Biscay, to the north of Spain, and one from the Mediterranean, to the south. A red or green spot means that one fish brain has more of a particular protein than the other.

These tools “are now able to identify the origin of a given fish,” says Complutense University biologist José Bautista.

Other labs in the FishPopTrace program developed additional forensic techniques to tell fish populations apart. Some used very small differences in DNA. Others looked at the chemistry and shape of ear bones.

The result is an array of techniques that can distinguish one population of fish from another – sustainably harvested fish from illegally caught fish.

Jann Martinsohn, a scientist with the European Commission’s Maritime Affairs Unit, said the research phase of FishPopTrace, which ended this summer, was just the first step.

“What we really aimed at is to develop tools which can readily be taken up to fight and support the fight against illegal fishing, which has a rather significant dimension worldwide,” he said.

The next step is to develop strict guidelines for laboratories, so the techniques can be used in criminal investigations. Martinsohn hopes by integrating science and enforcement, it will be possible to reduce the illegal fishing of endangered populations of fish.

Lars Olave Lie, manager of the Lie Group Fishing Company in Norway, said he supports this forensic approach to ensuring all fishermen follow the rules.

Lie’s family has been fishing the waters off Norway for 120 years. He said he’s in favor of whatever can be done to keep the fishery healthy, so his family can stay in the business for the next 120 years.