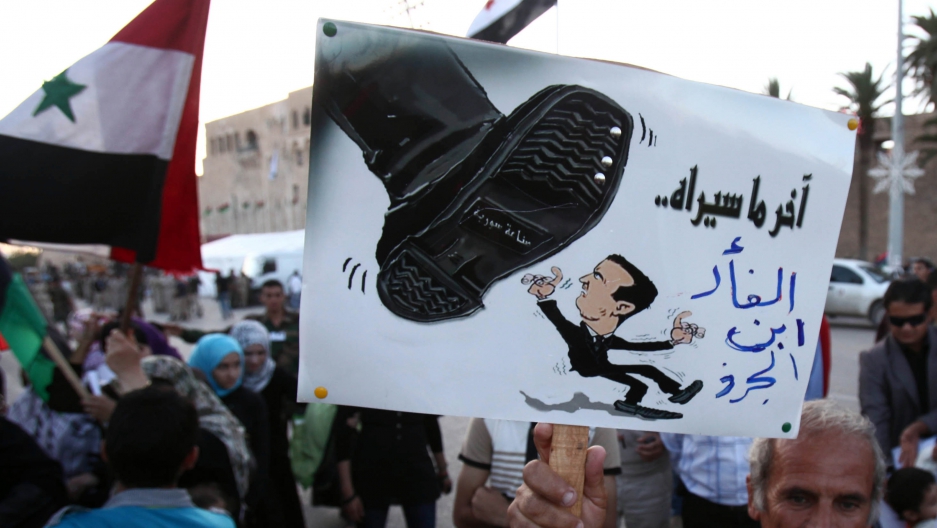 A Syrian man living in Libya holds an anti-Syrian President Bashar al-Assad caricature that reads in Arabic "The last thing that the mouse, son of the rat, will see (referring to the bottom of the shoe)" during a protest in Tripoli on October 28, 2011 against the Syrian regime.
Credit: Mahmud Turkia
Share

The rights group is calling for Syria to be referred to the International Criminal Court and suspended from the Arab League, which has seen its recent peace deal utterly flouted by the Assad regime.

Since the Nov. 2 agreement, forces loyal to the Syrian president have killed over 100 people in Homs, a central industrial city that has become a focus for protests calling for an end to the Assad family’s 41-year dictatorship.

A reporter working for GlobalPost recently journeyed to Homs, the capital of a governorate HRW says has suffered the highest number of casualties in the now eight-month crackdown.

Related: Syria, the cost of repression

Western diplomats in Damascus now warn the city, which is divided between majority Sunni Muslims, widely supportive of the opposition, and minority Allawites, an offshoot of Shia Islam that is largely loyal to the regime, is sliding toward civil war.

“Homs has become in some respects a sectarian conflict,” a senior Western diplomat in Damascus told GlobalPost.

“But it is not inevitable that situation must happen in the rest of Syria. Rising violence is the inevitable consequence of the regime's behavior: Arrest all protest leaders and those left behind are more covert and violent.”

The reporter described Homs as a “ghost city,” a far cry from its fame as the humor capital of Syria, the source of most of the jokes told over tea and water pipes in cafes across the country.

On the trip, the checkpoints that now form a ring of steel around Homs began some 10 kilometers outside the city, dozens of troops backed up by tanks.

Nobody interviewed during two days in the city was anything but angry and frustrated and, for the first time he heard it in Syria, the reporter found Homs residents using “we” and “they” to differentiate between Sunnis and Allawites.

In the Sunni districts of Bab Amr, Khaldiye and others, residents were glued to news of protests across Syria broadcast by Al Arabiyye and Al Jazeera, while in the Allawite neighborhoods to the south of Homs, Al Zahra, Al Hadara and others, residents preferred the regime’s own Syria TV and Al Dunia, which accuses protesters in Homs of being “armed criminal gangs” and “terrorists.”

Homs’ small Christian population has been left caught in the middle.

“I feel it is a Muslim conflict and we should keep our selves away from it,” said a Christian shopkeeper who asked to be known only as Abu George.

“Allawites want to keep the power and Sunnis want to regain the power. We know the current regime but we don’t know who will be in power after the change. We are between a rock and a hard place: The regime wants us to stand with him and protesters want us to go to street with them.”

The heavy death toll and repeated military assaults on Homs have driven increasing numbers of young Sunni men to take up arms to defend their neighborhoods, sometimes coordinating with the Free Syrian Army, which has cells based in and around Homs.

From a group of six young armed men in the Sunni district of Deir Baalbah, 24-year-old Abu Abdel Rahman, a student at the ruling Baath Party University in Homs, agreed to speak about the decision to use force against the regime.

“It was the end of May and I was protesting with my friends near a mosque in Khaldiye when the shabiha [pro-Assad thugs], who are from the Allawite districts, came with Kalashnikovs, pistols, sticks, iron pipes and wooden sticks,” said Abdel Rahman.

“They attacked us and I saw one of the protesters killed in front of my eyes. He was very young, maybe a teenager and he was shot with a pistol. They wounded tens of us. I ran away and that night I told my friends we had to find a way to protect ourselves from those brutal shabiha.

“We understand that a soldier or security man uses his arms to arrest or kill protesters. But a shabiha, who is a normal citizen like us, has no right to do this. The debate took two weeks then we decided as a group of 15 to get simple arms for self defense. After all this military crackdown, I believe the regime cannot be toppled by peaceful demonstrations.”

“They wanted to arrest some active protesters and attack our houses. We fired on their cars and forced them to turn around. We could stop them because they came with cars, not with tanks,” he said.

Like the Free Syrian Army, Abdel Rahman and his friends, who he said were once vehemently opposed to any kind of foreign intervention in Syria, are now calling on NATO and the international community to impose a no-fly zone, believing the Assad regime is flying in weapons from allies such as Russia and Iran.

“I want to say to the opposition leaders and the international community that we have been under attack for many months and they could do nothing to stop the regime killing us. We want a peaceful democratic change in Syria, but the regime’s crackdown is pushing protesters to become armed militants.”

Hugh Macleod and Annasofie Flamand in Beirut with a reporter in Syria.