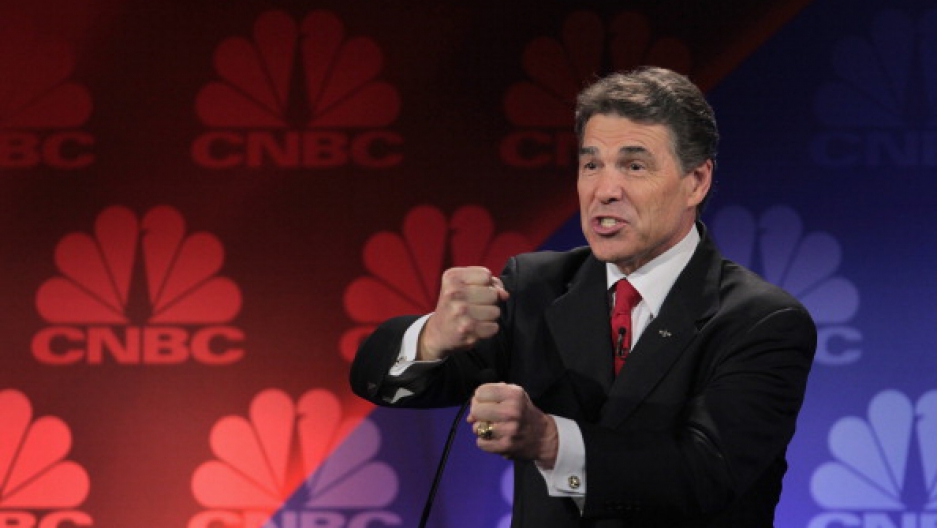 Republican presidential candidate Gov. Rick Perry has had a tough time. And Wednesday night proved no exception.  During a Republican presidential debate, Perry announced that if elected he would abolish three government agencies. And then, he promptly forgot the name of the third agency. After an awkwardly long and uncomfortable fumble, Perry concluded with, "Oops." We take a look a some of his most memorable gaffes and missteps throughout the campaign.

What are we missing? Give your suggestions in the comments section below.

1.) Perry Forgets Agency Name — Perry was asked a question about reducing the federal deficit and told the audience he would eliminate three federal agencies to help relieve the mounting debt crisis, according to the Associated Press:

The third agency of government I would do away with — the Education, the Commerce. And let's see. I can't. The third one, I can't. Oops.

Perry's fellow candidates tried to help him out, suggesting the EPA was the third agency. But when pressed by moderator John Harwood, Perry admitted that was not what he was talking about. See the video below.

The Texas governor said later in the debate that he meant to say the Department of Energy, reported Reuters.

2. Perry Said He Wasn’t Drunk During Speech — Perry said he wasn’t inebriated during a recent speech that went viral on YouTube.

This 8-minute video compilation shows Perry speaking to an influential conservative group called Cornerstone in New Hampshire. The video highlights his hand gestures, facial expressions and remarks. It has been viewed over 1.1 million times.

3. Perry on Mitt Romney's flip flops — Well the video really says it all . . . or nothing at all:

4. Perry criticized for hunting camp's racist name — Perry came under fire for not quickly removing a racist sign outside the hunting camp in West Texas that his family leased for nearly 30 years.

The Washington Post reports that Perry entertained lawmakers, friends and supporters at the camp, whose offensive name – “Niggerhead”—was painted on a rock outside the property’s gates.

Ranchers who once grazed cattle on the 1,070-acre parcel on the Clear Fork of the Brazos River called it by that name well before Perry and his father, Ray, began hunting there in the early 1980s. There is no definitive account of when the rock first appeared on the property. In an earlier time, the name on the rock was often given to mountains and creeks and rock outcroppings across the country. Over the years, civil rights groups and government agencies have had some success changing those and other racially offensive names that dotted the nation’s maps.

But the name of this particular parcel did not change for years after it became associated with Rick Perry, first as a private citizen, then as a state official and finally as Texas governor. Some locals still call it that. As recently as this summer, the slablike rock — lying flat, the name still faintly visible beneath a coat of white paint — remained by the gated entrance to the camp.

5. Perry questions legitimacy of President Obama’s citizenship (again) — In an October issue of Parade magazine, when asked if Obama's birth certificate was real, Perry responded "I don't know" and said that Donald Trump didn't believe it was real, reports New York Magazine. Since that initial statement, his position has evolved from doubting the president's citizenship, to lauding it as a good issue to keep alive, to admitting it was a distraction, to saying he was "just having some fun with Donald Trump," according the magazine.

Perry reportedly later recanted on his statements saying that he has "no doubt" that President Barack Obama's much disputed birth certificate is real, according to the Los Angeles Times.

What gaffes and misteps are we missing? Give your suggestions in the comments section below.