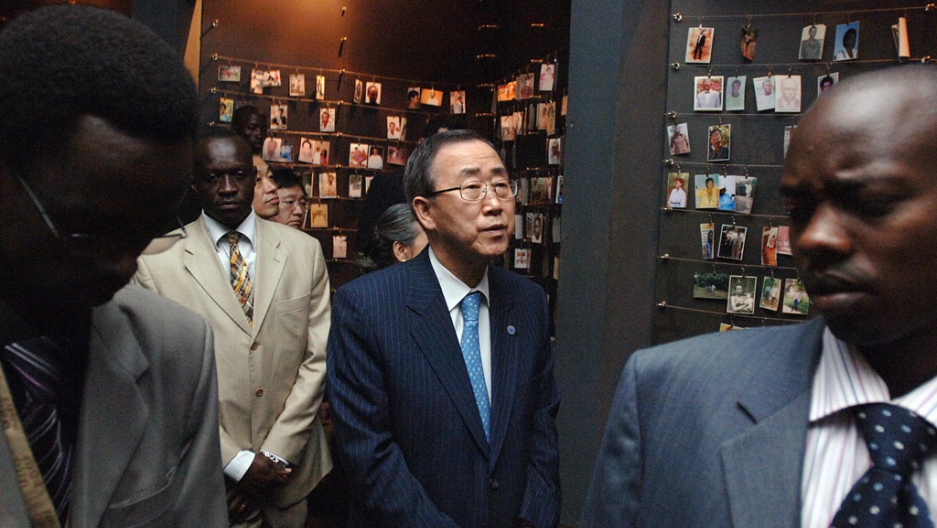 KIGALI, Rwanda — The lush tropical gardens, include palms, mango and banana trees. Delicate sunbirds hover to sip the nectar of tropical lilies and orchids. It appears to be a pleasant place to relax and enjoy the views of the hills of Kigali.

But this is no ordinary park. The ground beneath our feet is a gravesite for 250,000 people killed in Rwanda’s ghastly 1994 genocide.

At the Kigali Genocide Memorial, the guides are friendly and welcoming, yet also somber and respectful. Seventeen years after the genocide, grieving survivors leave flower arrangements for family members who were killed.

Rwanda is aching to come to terms with that bloody month of slaughter by machetes and the genocide memorial is a moving start.

Inside the memorial building, photos and videos give the history of Rwanda and help to describe how the country marched through time to the massacres. The antagonism between the Tutsis and the majority Hutu population had been brewing for more than a hundred years before exploding. There had been smaller outbursts of killings of Tutsis in the years leading up to the genocide, according to the museum's information.

The photos of stacks of hacked bodies and buckets of blood are gruesome and the videos of those who described how they survived are horrifying and heartbreaking. They are also cathartic.

Kigali City Council worked with Aegis Trust, a British-based anti-genocide organization, to construct the memorial. It includes archives that are designed to be a link to the past and a path to future healing. There is an education program in which workshops are held with teachers and students to encourage youths to be positive agents of change.

The memorial is also a center for survivors, providing them with medical care and counseling.

The memorial also has a room devoted to other modern-day genocides, including the mass killings of Armenians by the Turks, the Jews by the Germans, the Cambodians by their own people and the Bosnians by the Serbs. I found it helpful to put Rwanda’s genocide in perspective and to realize that for all our civilization, we have done terrible things to our fellow man in recent years.

I left the memorial shaken, but my experience had only begun.

In the peaceful garden, Serge Rwigamba, 28, described how his father and other family members were massacred. He was being interviewed by Mary Rose Madden, a journalist colleague who is also on the International Reporting Project trip to Rwanda.

As a boy of 11, Rwigamba ran from one hiding place to another in Kigali during the genocide. He went to his church where hundreds of Tutsis had sought shelter, only to be dismayed when the priest, whom he had served as an altarboy, denounced the crowd and told them they would be killed because they were cockroaches.

“It happened right there,” said Rwigamba, pointing to the prominent church on the nearby hill.

The enterprising boy hid and escaped from the church and then scrambled to other parts of the city.

As Rwigamba told his story, another memorial guide walked by and I saw a big v-shaped gash across his skull, no doubt a machete wound from the genocide. Many of the memorial’s guides are genocide survivors.

The memorial is a moving effort to help Rwandans and visitors alike come to terms with the genocide and move on.

But like everything in Rwanda, there was more beneath the surface. Rwandans must be very careful what they say about the memorial because they could be accused of perpetrating “genocide denial.”

Many of Rwanda’s Hutus privately question the memorial. They say it should not just be for Tutsis but for the large numbers of Hutus who were also killed in revenge murders.

Rwandan opposition politician Victoire Ingabire visited the memorial and questioned why it was only for Tutsis. Ingabire reportedly said the memorial should also be for all Rwandans. That seemingly innocuous statement challenged President Paul Kagame’s approved narrative of the genocide that it was the Hutus who killed the Tutsis. As a result Ingabire was arrested and has been in jail for more than a year.

Surprising as it may seem, Wednesday ended on a note of optimism.

Rwanda’s coffee growing and processing industry is growing by leaps and bounds. We spoke to three men working in the coffee industry and they praised the Kagame government for promoting coffee production.

Gilbert Gatali is a Rwandan who was born and raised in Canada and who returned to his family’s home in Rwanda in 1999. “This place is full of energy and it is exciting to be here,” said Gatali.

“I was driving through the rural areas and there was a group of men doing community service. They were repairing a bridge,” said Gatali. Many of those convicted of genocide murder must work on community service projects.

“I drove up and explained that I needed to get across. The men put down some logs so that I could drive my vehicle across,” said Gatari. “Just think, a few years ago those men were out killing people, and now they were helping me across the stream. That’s the kind of story that makes me hopeful about Rwanda.”

Andrew Meldrum’s trip to Rwanda is sponsored by the International Reporting Project.