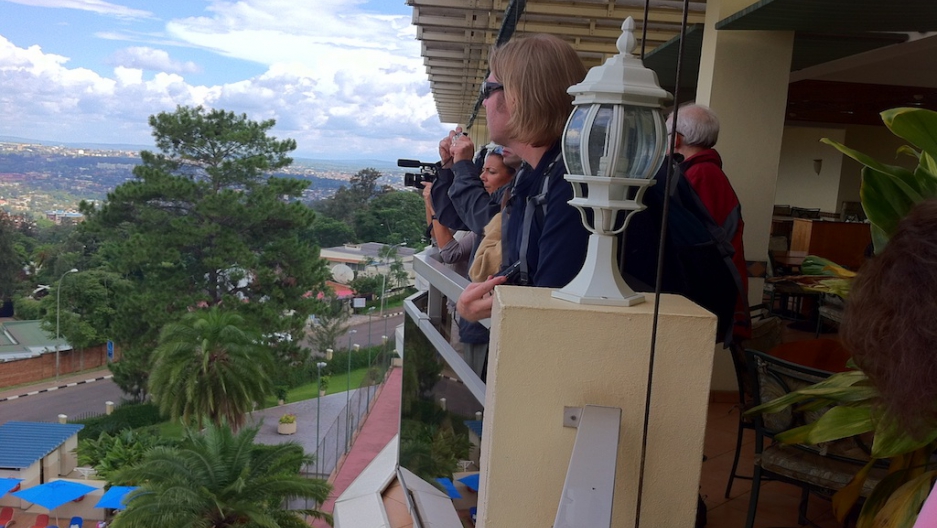 Members of the International Reporting Project’s two-week tour of Rwanda take in the view from the top terrace of the Mille Collines Hotel, popularly known as “Hotel Rwanda.”
Credit: Andrew Meldrum
Share

KIGALI, Rwanda — Built on a series of high hills, neat and tidy, lush with tropical vegetation, Kigali has a reputation as one of Africa’s prettiest capital cities.

Seeing Kigali for the first time by daylight, I can attest to all that. There is lots of large scale construction going on — a few hotel complexes, including a large Marriott, a huge conference center and new office buildings. Kigali is a city that is transforming before your eyes.

Kigali’s population has boomed in the past 10 years from an estimated 400,000 to 1 million today. And the growth is expected to continue to surge to 3 million in the next 20 years.

“When I first came here in 1996, it was just a little town. You had to take a dirt road from the airport into the city,” said a Zimbabwean friend who is in Kigali on business. “Now look at all the roads. No potholes!”

More: In Rwanda, a disconnect in picking GHI focus

The morning started with an early morning downpour and then the clouds gave way to sunny weather and then another thunderstorm. The rains here are plentiful. Exploring the city is a breeze thanks to the excellent roads.

First stop was the new State House Museum, the official residence of President Juvenal Habyarimana, whose death when his plane was shot down in 1994 set off the genocide of the Tutsis. The sprawling residence is fairly rundown and sparsely furnished and gives off an impressively eerie vibe. Habyarimana’s presidential jet was shot down right over the grounds of his garden. The wreckage of the plane is still there and the tour guide pointed to where Habyarimana’s body landed. The genocide against the Tutsis started immediately.

Adding to the creepy feeling of the place was the security, which forbids anyone from taking pictures of the remnants of the plane or the interior of the house. Plus, in the house are secret panels. One opens to a gun storage closet and another hidden door opens to a hidden staircase leading to large attic rooms where clandestine meetings were held.

And then there is the snake pool where the superstitious Habyarimana kept a huge python with distinctive white markings around its head. The president believed the snake gave him protection and, according to the tour guide, the snake disappeared after the plane crash.

It really did feel like a haunted house, especially as it was ground zero for the genocide. People say that the killing of Tutsis began on the orders of Mrs. Habyarimana.

It felt good to open the windows for a fresh breeze on the drive back into Kigali’s downtown where we went to the Mille Collines Hotel, popularly known as “Hotel Rwanda.”

This is the international hotel where more than 1,000 Tutsis hid during the genocide, sheltered by the hotel manager Paul Rusesabagina. The story was made into the film “Hotel Rwanda” and it’s wonderful to come into the lobby of that haven. French businessmen and tourists enjoyed lunch in the garden overlooking kids splashing in the pool.

The hotel is immaculate and pleasant and well run. It has a compelling sense of history. Yet when we members of the International Reporting Project’s current tour of Rwanda requested to speak to a hotel manager about the story, we were told there was no one who could speak about it.

In his book “Ordinary Man,” Rusesagagina describes how the hotel filled up with Tutsis trying to escape from the massacres. Several times he felt the situation was hopeless and all in the hotel would be slaughtered, and he wrote that when he went up to the hotel’s roof terrace to look at the view of the surrounding hills to say goodbye to his country.

The view from that top floor is gorgeous. We journalists went up there to take in the inspiring vista.

“See over there, all those red roofs? Just a few years ago that was all bush. And over there was undeveloped, and over there, too,” said Rwandan journalist Fred Mwasa. “So much has been built, so much has changed. Even if you go away for a few weeks, when you come back to Kigali, you see new things. Good things. Progress. But even under good things, there are some who suffer from the changes.”

Mwasa said many Rwandans are proud of the Mille Collines Hotel.

“It is one of our best hotels and it has a distinguished history. Secretly, quietly, many people are proud of Milles Collines. They know that at least somebody did something against the genocide,” said Mwasa. “People don’t talk about their pride in the Milles Collines, though, because they don’t want to be associated with Paul Rusesabagina. He is now declared as an enemy of Kagame and of Rwanda.”

I had hoped a visit to “Hotel Rwanda” would be infused with a sense of hope and would clear out the lingering menace of Habyarimana’s house. But with Paul Rusesabagina in exile because of his opposition to President Paul Kagame, the Milles Collines Hotel has an unspoken history, like so much else in Rwanda.

Andrew Meldrum's trip to Rwanda has been made possible by the International Reporting Project.