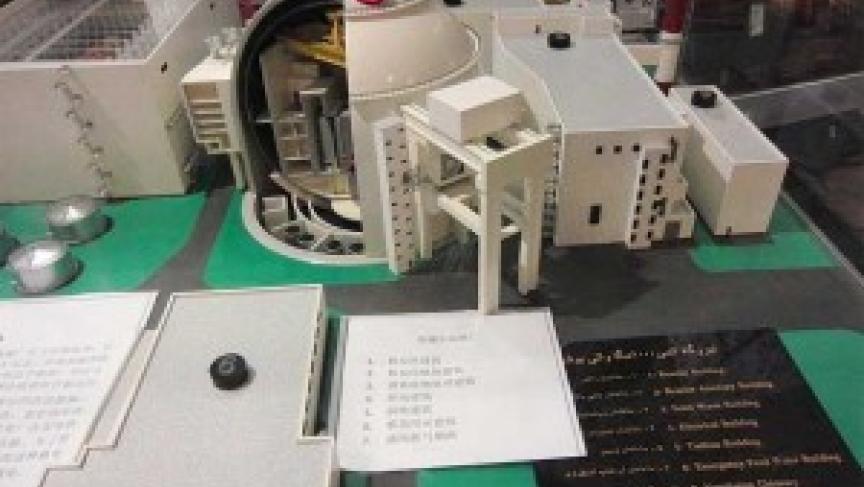 A model of Iran's Bushehr Nuclear Power Plant from 2010. The plant is at the center of concerns Iran is coming closer and closer to developing nuclear weapons. (Photo from the Iranian pavilion of EXPO 2010 in Shanghai.)

The United Nations nuclear watchdog agency has released a report documenting signs of work by Iran to create a nuclear weapon.

But the episode has already fueled speculation that the Israelis might consider bombing Iran’s nuclear facilities.

Israelis across the political spectrum have long considered Iran’s nuclear program to be a grave threat. And Israeli leaders have long alluded to the necessity of taking military action. But news reports suggest this time, an attack could be imminent.

Tuesday, before the report was released, Israeli finance minister Yuval Steinitz said he hoped the UN report would finally bring the gravity of the Iranian nuclear threat into focus for the international community.

“We know it already for 15 years, it is very clear and now it is going to be crystal clear to the entire world," he said. "And therefore Iran is producing the most dangerous threat, not just to Israel and the Middle East, but to Europe, the United States and the rest of the world, and it’s up to the world to do its utmost.”

Ronen Bergman, a military affairs analyst at the Israeli newspaper Yedioth Ahronoth, said Israel is sending the message that if the world does not prevent Iran from developing nuclear weapons, then Israel will take matters into its own hands.

“Israel is trying to convince the world. But the question is, is there anything behind these threats? And I would say, yes,” said Ronen Bergman, a military affairs analyst at the Israeli newspaper Yedioth Ahronoth. “I would say that Israel, as a last resort, if it is convinced that the world is not going to take serious actions against Iran, the Israeli prime minister – not just (Benjamin) Netanyahu – I think any Israeli prime minister would launch the bombers to hit the Iranian nuclear sites."

New U.S. defense secretary Leon Panetta just visited Israel and said things need to be coordinated between the Israeli and American governments. That's been perceived as a word of caution to Netanyahu.

Nicholas Burns, a former undersecretary of state who worked on Iran policy under president George W. Bush, said an Israeli strike on Iran would almost definitely draw the United States into a war.

“I think Iran would like nothing than to get into a war with Israel. We’d have to support Israel," Burns said. "It’s very important that the US have an agreement with Israel: 'We’ve got this one. We’ve got your back. We’ll protect you. But don’t drag us into a war that’s not of our choosing.' ”

The Israeli public and political leadership is deeply divided on the issue.

A former head of Israel’s Mossad spy agency, Meir Dagan, caused a stir early this year when he said bombing Iran was the “stupidest thing” he’s ever heard.

Jeffrey Goldberg, national correspondent with The Atlantic, said several former Israeli intelligence and military officials fear that Netanyahu, along with his defense minister Ehud Barak, are ready to strike Iran. They worry there’s no one left in the upper echelons of power to advise them against doing so.

Goldberg said some of what’s going on is public posturing on the part of the Israeli government, aimed at getting the U.S. and its allies to hit Iran with tougher sanctions. But, he added, the Israeli prime minister is also completely sincere when he talks about the need to stop Iran.