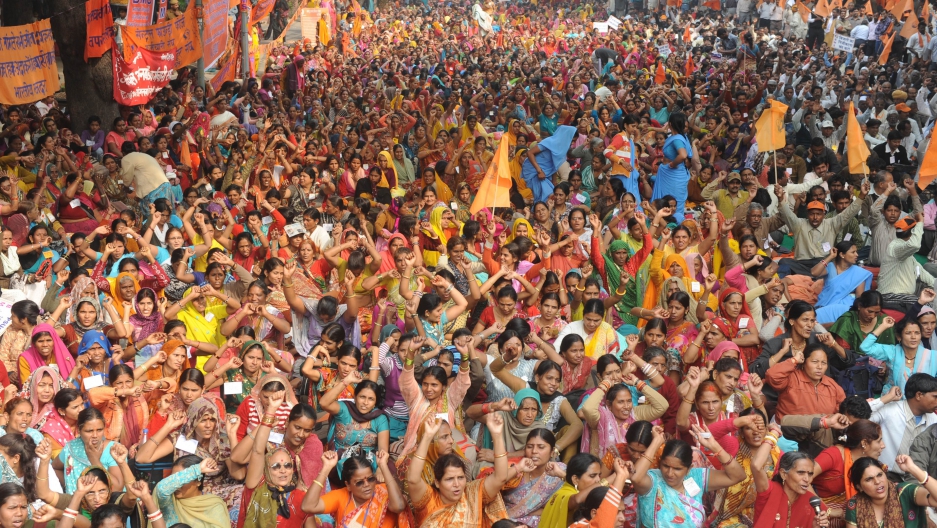 Editor's Note: The Shiva Rules is a year-long GlobalPost reporting series that examines India in the 21st century. In it, correspondents Jason Overdorf and Hanna Ingber Win will examine the sweeping economic, political and cultural changes that are transforming this nascent global power in surprising and sometimes inexplicable ways. To help uncover the complexities of India's uneven rise, The Shiva Rules uses as a loose reporting metaphor Shiva, the popular Hindu deity of destruction and rebirth.

One of the largest and longest running industrial actions to hit the country's manufacturing sector in recent years, the strike by employees at Maruti Suzuki's Haryana automobile factories sent an ominous signal.

In the '60s, '70s and '80s, frequent strikes and lockouts slowed India's industrialization, costing companies millions and causing industry to abandon some states like Kerala and West Bengal altogether.

Now it looks like those days of industrial turmoil may be on the way back. It couldn't have happened to a more important symbol of the new India.

Maruti Suzuki is the showpiece success story of India's post-1991 economic liberalization. One of the country's most respected companies, it ended years-long waiting lists for cars built by Hindustan Motors. And it paved the way for investments by the world's largest car makers by proving that manufacturing in India could be profitable.

The joint venture, in which Suzuki Motor Corp. owns a 54 percent stake, became the largest contributor to its Japanese parent's bottom line in 2009.

This fall's strike, which resulted in a wider-than-expected 60 percent plunge in Maruti's profits for the second quarter, suggested the company — and India — may be entering a new era.

“It's everybody's dream to work for a multinational company like Maruti Suzuki,” said 25-year-old Pradeep Singh, vice president of a new, independent union that workers at the company's Manesar plant fought to establish this fall. “But once you get hired and see the reality, it's a big disappointment.”

Singh is typical of India’s disgruntled union laborers. He has achieved what might be described as the Indian dream. His father, a farmer, ekes out a living from an acre or so of land. But Singh left the fields behind and effectively broke into the middle class with his job at Maruti.

He normally earns about $300 a month — nearly three times the national average income. Like many of today's workers, however, Singh has higher aspirations. Now, along with around 30 other union leaders, he’s under suspension for his activities during the strike, convinced fighting is the only way to get India Inc. to share its growing prosperity with the work force.

India's large corporations have faced 10 major strikes in the last three years, and things may well get worse before they get better. This year alone, there have been strikes and protests at Coal India, Bosch India, Air India, Comstar, Ceat Tyres, Volvo Buses and at textile factories in Punjab, according to Outlook Business.

“If the management does not learn to deal with the sensitive dimension of labor and their circumstances, I am afraid these kinds of things may increase,” said Kuriakose Mamkootam, a professor at Ambedkar University who has written extensively about industrial relations in India.

“There is already what I would call a hidden, unexpressed sense of grief and violence amongst the people.”

That tension stems partly from the gradual dismantling of India's socialist economic policies begun by then-Finance Minister Manmohan Singh in 1991. But successive governments' reluctance to swallow the bitter pill and reform some of the country's tougher labor laws has also contributed to the friction.

One such law forces firms with 100 or more employees to seek government approval before they can fire workers or close down. Labor laws also prevent companies from reassigning workers to different tasks, so there is no way for companies to adjust to changes in the market.

As a result, the official employees of companies like Maruti have it pretty good.

But because of those very same laws, those official employees make up a very small fraction of the work force.

Knowing they can't fire or reassign workers, India's large companies simply don't hire them. Instead, they outsource work to the so-called “unorganized sector,” which comprises companies with fewer than 100 employees. Or they employ contract workers through middlemen.

As a result, only 7 percent of India's 400 million laborers are employed by firms large enough to be compelled to follow the rules. The rest toil in grim sweatshops, often for less than the national minimum wage.

Efforts at reversing course have already been painful.

Since 1991, governments have increasingly looked the other way as even the largest firms assigned a greater portion of the workload to contract laborers whom they could not only hire and fire more easily, but also pay less.

“An in-between community is being created that can neither get a job, nor continue in agriculture, and they are being used as an army of reserve labor by capitalists to keep wage levels and other rights of the workers at a low point,” said Tapan Sen, general secretary of the Communist Party-affiliated Center of Indian Trade Unions (CITU).

More: Will the elderly bring down India?

For instance, the official Maruti employees were angered by company payment policies. Only about half of their ostensibly generous salary is guaranteed, workers say. The other half is a “production performance reward” that can be slashed by as much as 20 percent every time a worker takes a day off. Moreover, showing up a minute late in the morning — or from the seven minute break you get between 7 a.m. and noon — will cost you half a day's pay, the union alleges.

“In any manufacturing company, especially in assembly line operations, discipline on timings in shopfloor is crucial to the overall process. There are well-organized breaks for lunch, tea etc for every worker,” a Maruti Suzuki spokesman said, via email.

Base salary cannot be reduced for employees who miss work, and workers who lose their production performance reward can get it refunded if their attendance improves within three months, he added.

Those are not the only footnotes to the Indian dream, though.

Nearly half of the employees at Maruti's Manesar plant weren't “regular workers” at all, though they showed up every day, too, and performed much the same work. So while 1,000-odd regular workers like Pradeep Singh could hope to earn about $300 a month if they didn't miss any days, 1,200 contract workers could only earn about $120, said Satvir Singh, who heads CITU in Haryana.

“Salaries at Maruti Suzuki are the industry best for permanent workers and higher than stipulated wages by state government for contract workers,” Maruti's spokesman said.

Similar conditions prevail at companies like Honda Motorcycle and Scooter India, Nokia and Voltas, according to Outlook Business. It may not be coincidence that all of those firms have recently faced strikes.

“The only common thread is the issue of contract labor,” said Rajiv Kumar, secretary general of the Federation of Indian Chambers of Commerce and Industry. “That is quite clearly spreading all over the country.”

Now, though, the government looks set to double down.

On Oct. 25, just days after Maruti's striking workers returned to work, India's cabinet approved a landmark manufacturing policy. Designed to create 100 million new jobs, it aims to boost the manufacturing sector's output to 25 percent of GDP by 2022 from the current 16 percent — where it has stagnated since 1980.

But the new plan won't deliver the key reforms to improve infrastructure, facilitate land acquisition and ease labor laws that industry maintains are necessary. Instead, it simply calls for the creation of seven or so islands — mammoth industrial parks known as National Investment and Manufacturing Zones — where the usual rules won't apply.

As a staff editorial from India's Economic Times suggested, it is a “fine example of a policy for the sake of a policy.”

Or maybe it is something worse.

According to union leaders and industry representatives alike, successive governments moves to work around strict labor laws have played an important role in souring relations between labor and management.

In the controversial Special Economic Zones set up to encourage export-related industries, for example, companies misused their gated properties to fence out unions and violate labor laws, says CITU's Sen.

Similarly, new government sympathy for industry and a reduction in the number of labor inspectors to one for every 200 factories has weakened the enforcement of laws related to wages and working conditions, says Krishna Shekhar Lal Das, an industrial relations expert at the Institute for Integrated Learning in Management.

But at the same time, India's failure to reform its labor laws altogether has had disastrous consequences. On the one hand, the tough rules continue to prevent the manufacturing sector from growing, because India's tiny sweatshops can't compete with China's mammoth factories. Yet, on the other, by fighting to keep laws on the books that don't apply to most workers, the trade unions have ensured that for most of the poor neither wages nor working conditions can improve.

“They are working for a labor aristocracy, because their interests are tied to them,” Kumar said. “The real poor in this country cannot afford to be unionized.”