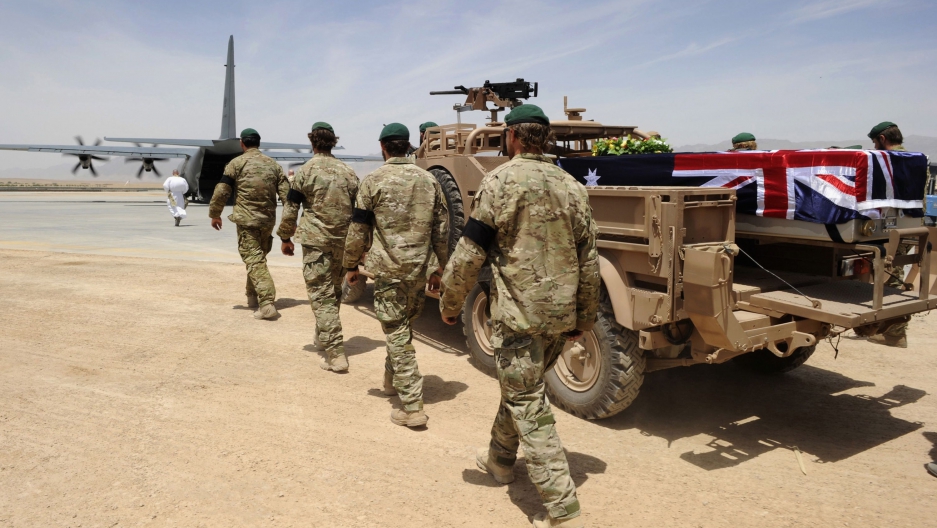 Despite growing public opposition to the long running war in Afghanistan, Australia's leadership has reaffirmed its military support and commitment to rebuilding the country.

Prime Minister Julia Gillard used a surprise visit to Afghanistan to praise the bravery of Aussie troops just a week after three Australian soldiers were shot to death by one of the Afghan soldiers they were training.

Gillard, on her way back from the G20 summit meeting in Cannes, flew into Tarin Kowt — where the soldiers were killed — to "share a barbecue lunch with some of the 1550 Australian soldiers stationed in the southern Camp Holland base," News.com reports.

Gillard reportedly acknowledged that her visit came at a difficult time for members of "Mentoring Task Force 3."

"When I started planning this trip I didn't realize that it would be in the shadow of such very deep sadness," she said, according to the Sydney Morning Herald.

The deaths took the number of Australian soldiers killed in Afghanistan to 32, 11 of them this year alone.

Gillard then headed to Kabul to discuss plans to transition military control to Afghan armed services by 2014 with president Hamid Karzai and the new commander of the International Security Assistance Force, General John R. Allen.

While there, she opened the new purpose-built Australian embassy as a "bricks and mortar" sign of Australia's long-term commitment to the war-torn country, The Australian reported.

Recent polling cited by the website crikey.com indicated that nearly two-thirds of voters support withdrawing of Australian troops from Afghanistan.

Essential Research’s weekly online poll found a jump in support for pulling out troops, up from 56% in March this year and 47% in October last year. Support for either maintaining Australia’s current commitment or increasing it has fallen 5 points to 30%.