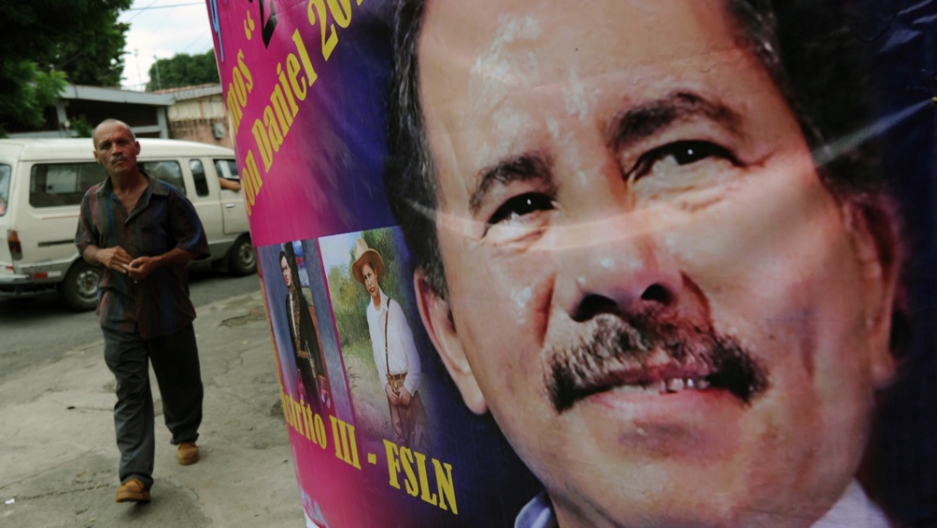 MANAGUA, Nicaragua — There’s not a lot of wiggle room in the Nicaraguan Constitution: Article 147 clearly states that sitting presidents cannot be reelected.

So what’s President Daniel Ortega doing on the ballot in Sunday’s presidential election?

Partly due to a growing economy, Ortega — a former guerrilla leader who also presided over the revolutionary Sandinista government in the 1980s — is expected to cruise to victory over a divided opposition.

Although Nicaragua remains one of the poorest countries in the western hemisphere, the economy is growing faster here than in any other Central American nation thanks, in part, to rising prices for coffee, beef and gold, the country’s main exports.

During his time in office, Ortega, 65, has allowed the business elite to flourish, while investing in social-welfare programs for the poor. At the same time, he has steadily consolidated power. Ortega, and his Sandinista party, are now in firm control of nearly all government institutions and much of the media.

But Ortega’s most brazen act was to bypass the constitutional ban on reelection by having the Sandinista-dominated Supreme Court sanction his candidacy.

“It all smells bad,” said Maria Celina Burgalin of the Foundation for Transparency and Ethics, an electoral monitoring group in Managua.

Ortega's candidacy may have been the election's original sin, but it's just one of several problems with the ballot that critics have flagged.

The Sandinistas control the highly criticized Supreme Electoral Council, which is charged with staging elections. The council, headed by an Ortega loyalist, oversaw the 2008 municipal elections that were marred by widespread accusations of fraud in 40 towns and cities, including Managua.

Identification cards have yet to be distributed in many opposition strongholds, which could prevent up to 4 percent of eligible voters — about 120,000 people — from casting ballots, according to Burgalin.

In addition, the Sandinistas have refused to allow independent Nicaraguan organizations, including Burgalin’s group, from monitoring the elections.

“The fact that the domestic observation groups have not yet been accredited represents a problem for the transparency of the whole exercise,” said Juan Antonio de Gabriel, deputy director of the European Union’s electoral monitoring team.

Read more: What they'd do without Chavez

Even Ortega’s campaign song has come under scrutiny. It’s a blatant rip off of the Ben E. King classic “Stand by Me.” Sony Music, which owns the rights to the song, has threatened legal action, but the campaign spot plays day and night on Nicaraguan TV.

By contrast, there are almost no ads or news coverage of the three main opposition candidates.

That’s because Ortega and his family have spent the past five years buying up television and radio stations and now control or influence most of the mass media, according to Carlos Fernando Chamorro, a journalist and former Sandinista who quit the party in the 1990s.

Ortega has given no press conferences during his last five years in office. He has given extended interviews to just two journalists — a Russian reporter and British TV host David Frost.

Other Sandinista officials must receive approval from first lady Rosario Murillo, Ortega’s communications director, to speak to the press, and they didn’t respond to several requests for interviews by GlobalPost.

Getting on the ballot

In an interview, Chamorro, the journalist, described Ortega’s legal somersaults to get on Sunday’s ballot as “something out of Ripley’s Believe it or Not.”

After failing to win enough votes in the legislature to amend the Constitution, Ortega turned to the Supreme Court.

He chose a day when several opposition magistrates had gone home amid a power outage. He then called in substitute judges, who were pro-Sandinista. They promptly struck down the reelection ban on the grounds that it violated Ortega’s human rights.

“The court ruled that all citizens have the same rights to aspire to public office,” Chamorro said. “But under that logic, a 15-year-old could run for president.”

Some anti-Sandinista candidates called for a boycott of the elections, concerned that their participation lended the vote legitimacy it didn’t deserve.

But, as on other issues, they failed to reach a consensus.

Presidential candidate Fabio Gadea, a conservative, 79-year-old radio-station manager who is in second place, according to the latest polls, said an opposition boycott would have given Ortega’s party an opportunity to take full control of the legislature.

“Daniel Ortega is an illegal candidate, but we are going to compete,” Gadea told GlobalPost. A boycott, he said, “would amount to surrender.”

Political analysts chalk up Ortega’s popularity to a combination of shrewdness, good luck and good friends.

The new, more conservative Ortega has ditched his Marxist rhetoric and threats to confiscate private property. He spent his term cozying up to Nicaragua’s business community. And because the Sandinistas control most of the major unions, there have been few strikes. Business owners say it's easier to make money with the Sandinistas in power. They point out that when the party was the opposition, it often fomented street protest and labor stoppages.

“This is a pro-business government,” Chamorro said. “Ortega’s position toward the private sector is: ‘You can make money, but I’m in charge of politics.’"

Meanwhile, Ortega has repaired relations with the Roman Catholic Church, which used to be fiercely anti-Sandinista. And he has tried not to antagonize the U.S. government, which imposed an economic embargo on Nicaragua and financed the Contra guerrillas in the 1980s.

In addition, Ortega’s staunch ally, Venezuela President Hugo Chavez, has provided his government with between $1.5- $2 billion in subsidized oil and other
assistance over the past five years. Ortega has used the windfall to distribute housing materials, land titles, medicine, scholarships and transportation subsidies.

If the polls predicting an Ortega victory are any indication, the boost in government benefits easily trump more esoteric issues like the health of Nicaragua’s democracy.

Take Guadalupe Alvarez. She received a home loan from the Sandinista government, while three of her six children received scholarships to study at state-run universities.

Perhaps not surprisingly, Alvarez, 47, spent a recent afternoon waving a Sandinista flag at an Ortega-for-president rally.

“I give thanks to God,” she said, “and to Daniel Ortega.”