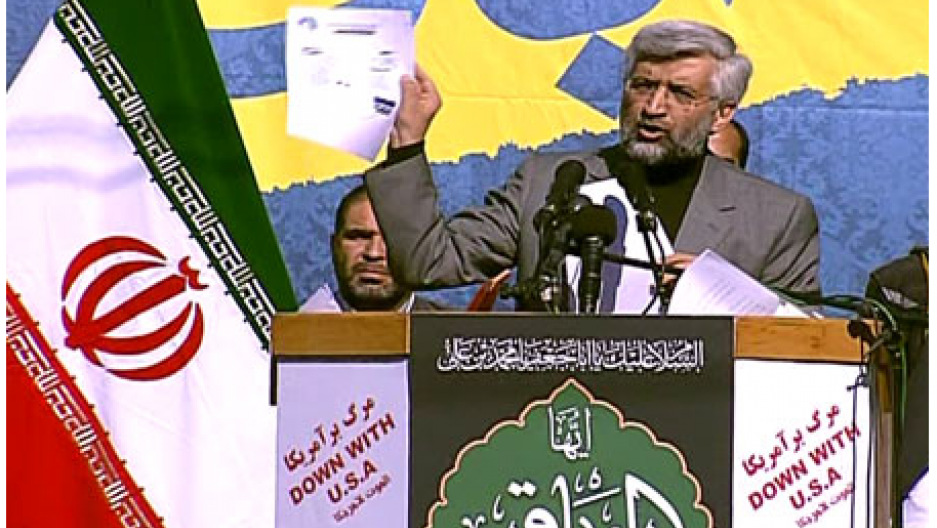 Speaking from a podium marked "Down with USA", he claimed the papers implicated the US government in ties to "known terror groups".

More from GlobalPost: Are the US and Israel considering a strike on Iran?

Jalili accused Washington of funding and directing terrorist rings in order to advance its own agenda in the Middle East.

According to Press TV, Jalili said:

"Iran has irrefutable evidence that exposes the official involvement of the United States government in anti-Iran planning and the dispatching of elements to conduct acts of sabotage and terror in Iran and other regional countries."

Iran's ambassador to the UN will ask the international body to seek the prosecution of the US administration, Jalili claimed.

Tehran also reserves the right to pursue Washington in both Iranian and international courts of law, he said.

Jalili was speaking at a rally to commemorate the day, 32 years ago, that student supporters of Iran's Islamic revolution took 52 Americans hostage in the US embassy in Tehran.

Anniversary events took place all over Iran, according to Press TV, with participants also taking the occasion to celebrate the Arab Spring and Occupy Wall Street:

This year, the main agenda of Iran's Student Day rallies is demonstrating solidarity with the popular Islamic Awakening uprisings across the Middle East and North Africa as well as the global anti-capitalism movement of “Occupy Wall Street.”

Tehran denies recent US charges that it was involved in an alleged assassination plot against the Saudi ambassador to Washington.

Jalili argued Thursday that the US allegations were a retaliation for Iran's actions against "US state-sponsored terrorism".

The Iranian government has stepped up it anti-US rhetoric in anticipation of the publication of a UN report on its nuclear program, Reuters noted. The International Atomic Energy Agency's report, due next week, is expected to say that Iran is seeking to develop nuclear weapons.

More from GlobalPost: Iran claims to have proof of US-led terror plots