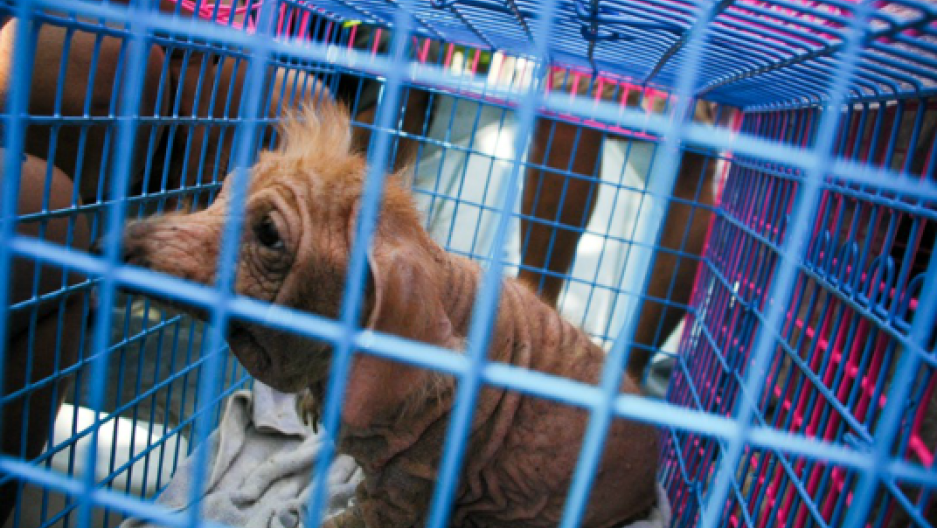 This hairless poodle was rescued with a woman who had to be evacuated from her home in Bangkok, Thailand. Many pets, however, are being left behind. (Photo by Irwin Loy.)

The tragedy in Thailand continues as flood waters seep into the capital of Bangkok, forcing tens of thousands to flee their homes.

Unfortunately, when they flee, many of them don't have the money to bring their pets along with them. Thousands of pets have been left stranded in homes and neighborhoods that are slowly — and sometimes not-so-slowly — filling with water.

Fortunately, volunteers working with the government have stepped in to help rescue the terrified and traumatized animals.

"I felt bad for the pets. I heard the government wanted volunteers, so I decided to come here," said one volunteers, who usually works on cattle vaccines for the country's ministry of agriculture.

Every day he goes out with a metal boat, loaded with plastic cages and dog food, in search of animals. He has the scars to prove it, too. Some of the cats he's rescued have left deep scratches on him.

"One day, we had to rescue some dogs in the suburbs. All of the neighbors were telling us the waters were full of crocodiles," he said.

As he pulls the boat down the network of canals that used to be roads, he recovers numerous animals — 11 by the afternoon. Then he got a call about a woman who needed rescue, but was unwilling to leave unless she could take her cats with her.

So the volunteer and his partners made their way to the woman's house, where she loaded herself into the boat along with some diabetes medication and personal items. The volunteers went to work rounding up the cats. The woman, who's affectionately known by the Thai word for cat lady, was eternally grateful.

"At first I didn't want to burden anyone, but I decided to call the animal department because I couldn't bear it any more," she explained. "The water kept rising and I couldn't feed my cats any more. I was really afraid they would die."