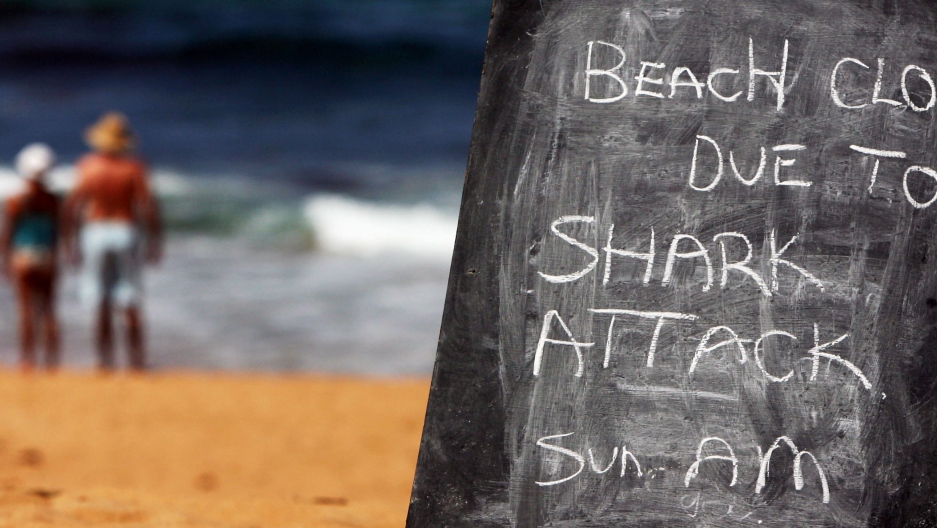 Avalon Beach near Sydney, Australia, is closed to the public after a shark attack on a surfer on March 1, 2009.
Credit: Ian Waldie
Share

Perhaps it will be remembered as the Great Shark Hunt of 2011, prompted by three fatal attacks in quick succession off Australia's western coastline.

Three men have been killed by sharks for the WA coast in 2011: Texan man George Thomas Wainwright, 32, was killed scuba diving alone off Rottnest Island in October; businessman Bryn Martin, 64, was taken while swimming off Perth's Cottesloe Beach the same month; and bodyboarder Kyle Burden, 21, was killed near Bunker Bay in WA's southwest in September.

According to a recent article in The Sydney Morning Herald (SMH), a shark cull — authorized by the government of Western Australia to find what many were speculating was a "rogue" great white, and to rid the waters of other potential maneaters — was only the fifth such hunt of the year.

Shark attacks in Russia, the Seychelles, Reunion Island and Mexico similarly led officials to spring into action, mainly to reassure a terrified public it seems.

The WA state government, meanwhile, reportedly given the go-ahead for any great white sharks to be killed if they posed a threat to human life.

Now, Christopher Neff, a PhD candidate at the University of Sydney into public responses to "shark-bite incidents" off South Africa and the United States, has penned a timely response to the hype (although, with just a handful of recent stories on shark attacks in this column generating more than 10,000 page views, we of course consider it legitimate coverage of a serious public safety concern).

Neff tries to turn attention to prevention rather than a knee-jerk political cure.

Despite the nightmare-invoking details of the attacks of Western Australia, Neff's SMH article makes you want to go back in the water, be it Perth, Sydney or that unspecified place in New England where Sheriff Martin Brody (almost) met his toothy match.

He starts by arguing that while the public's concern about the risks is reasonable, swimmers "are being offered a political solution to a public safety problem."

There is no evidence that shark hunts reduce attacks. Research shows these responses are political, symbolically reducing public perceptions of risk rather than the actual risk. At the core of this reaction are two elements: the pressure on any government to respond after tragic and unexplainable events; and the familiarity of the ''rogue shark'' theory.

Can we pause there just to say, "Hallelujah!"

Supporting Neff's assertion that shark hunts, or culls to use the more palatable of the terms for the conservation-minded, is a collection of responses from the science community — published by Down Under's new favorite resource, the Australian Science Media Centre.

Among them, that of Shaun Collin — Western Australia Premiers Research Fellow and Professor of Neuroecology in the School of Animal Biology and Oceans Institute at the University of Western Australia (we're hoping that's his full title). Here's a snapshot quote:

The culling of any species of sharks is not the solution. Not only will this be indiscriminate killing of a protected Australian species (under both the EPBC Act and state legislation), there is no way of being sure the sharks caught will be those responsible for the attacks. At present, there is no data to suggest that shark numbers are increasing off WA’s coastline and shark attacks in Australia have remained relatively constant over time, occurring at a rate of approximately one per year for the last 50 years. Sharks are apex predators and they play a critical role in the complex balance of oceanic ecosystems and their removal can have major impacts on other marine species. Education and surveillance are the best prevention of human fatalities off the WA coast until better repellent devices are developed.

Meanwhile, Dr Charlie Huveneers — a Shark Ecologist within the Marine Environment and Ecology Program at the South Australian Research and Development Institute (Aquatic Sciences) and lecturer in the School of Biological Sciences at Flinders University, Adelaide (ditto on the titles) writes, among other things:

Although shark attacks are tragic events and are often highly mediatised, they are still very rare events with a low probability of occurrence... Around the world, several means of mitigating shark attacks have been put in place with variable level of success, but it is unlikely that one method can be considered the best way to reduce shark attacks. A combination of techniques selected depending on the characteristics of each location frequented by potentially dangerous sharks is likely to be the most efficient.

Techniques, he says, such as the Shark Spotter program instituted by the City of Cape Town, South Africa, where spotters perched on mountains towering directly over the city's beaches  "monitor for the dark silhouette of sharks on the sandy background.”

Back to Neff, who's done his homework — stretching back to a British Medical Journal article from 1899, which almost half a century later inspired a Sydney doctor (no less) to develop the "rogue shark theory."

The article addressed a series of unexplained shark bites and caught the attention of the shark researcher and Sydney surgeon Sir Victor Coppleson, a good man and public servant. With his heart in the right place, he developed the ''rogue shark'' theory in the 1940s and '50s; however, it went awry as he tried to explain why sharks bite. His theory has been discredited by science over the years, but found its way into the film "Jaws" and into our collective consciousness.

Neff concludes by saying that sharks are not "looking for people," but rather "are following prey, such as whales, dolphins, bait fish and seals.

He says that rather than send out the shark hunters, governments can educate the public to "reduce personal risk based on their behavior."

He even specifies four shark-attack-risk-reducing factors:

Finally in the interests of balance, here's a politician's reaction to the fatal attack on bobyboarder Kyle James Burden, 21, at Bunker Bay in September, cited in Perth Now:

“A lot of people say the water is the shark’s territory,” Mr Stubbs said.“But I think if they can find the shark (responsible) they should get rid of it. It’s a personal opinion, not a shire opinion but I personally think they should (kill it.) If they have attacked a human in one of those areas they may want to do it again and I think we should be stopping that.”

Perhaps, given the statistics, Stubbs might be better advised keeping personal opinions to himself and urging rate payers to read Neff's four risk-reducing practices ... and then have a nice swim.