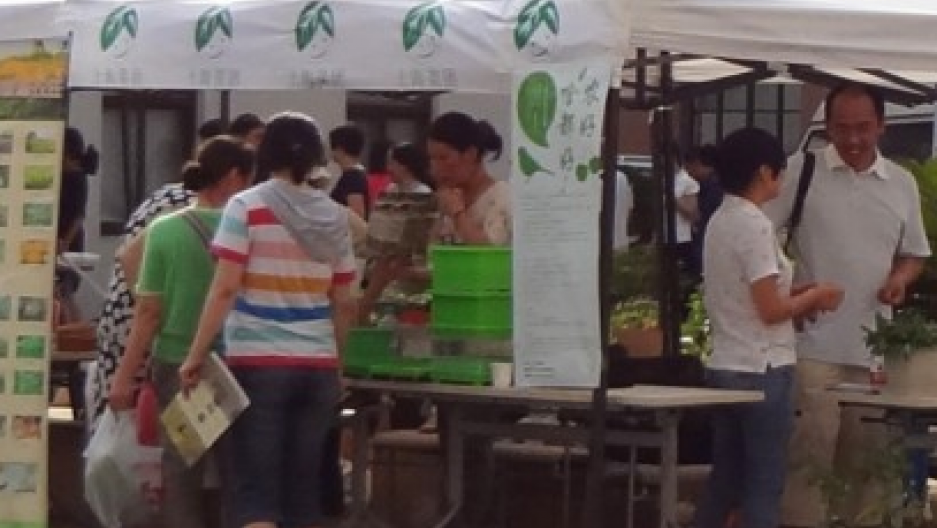 Chinese shoppers visit a farmers' market in Shanghai in an effort to get better, safer organic food in order to keep their families safe. (Photo by Rebecca Kanthor.)

Li Lan, a 38-year-old architect in Shanghai, wants to provide safe, healthy meals for her husband and 4-year-old son.

In China it’s not so simple with the issue of food safety a real, constant concern.

Every week, Li hears news stories about tainted food. There have been reports of exploding watermelons, pork masquerading as beef and dirty recycled cooking oil. And that's just this year.

“It’s scary,” Li said. “You realize that what you’re eating is dirty or has lots of chemicals in it. How can we eat that? It could kill someone! It’s terrible.”

Li shops at a neighborhood vegetable market in Shanghai. She usually buys fruits and vegetables there, hoping they don’t contain too many pesticides. She buys brand-name meat, tofu and canned goods at the supermarket where hygiene standards are higher.

Many of her friends are buying organic, but Li is still on the fence.

“I compare prices. If organic food is too expensive, I’d rather buy regular produce from the vegetable market,” she said, adding that most people can’t afford to buy organic.

The organic industry is growing in China, with many operations exporting to the United States and other countries. But middle-class Chinese are starting to buy organic as well.

“In China, it is very different,” said Richard Brubaker, professor of sustainability at the China-Europe International Business School in Shanghai. “It’s not about health and improving of health; it’s about food safety and maintaining a basic integrity in the food, primarily for their children.”

Brubaker said that in a country where “fakes” are prevalent, people are wary.

“No one knows which labels to trust. There are multiple labels, and they each have their own questions of integrity,” Brubaker said.

Li and her family recently traveled across town to check out a monthly farmers' market, where 10 local farmers hawk their produce. The farmers hope to build trust by meeting directly with shoppers.

One farmer tells a customer that he doesn’t have an organic certificate, but he’s growing his vegetables safely, without using chemicals.

The farmers here say they’re not seeking organic certification because the process is lengthy and expensive. Lora Shen, who runs Dreamy Farm with her husband’s family, added that some organic certificates are fakes and can be bought with bribes.

“If you have money, you can get one easily,” she said.

“Most of our customers know us and have been to our farm. It’s a vote of confidence,” Jia said.

Even if he tried for certification, though, he might not get it.

Jiang Yi Fan, the farmers’ market organizer, said China’s polluted water supply makes it hard for local farmers to get a real organic label, but he said shoppers should support natural farms, even if they aren't certified.

“If the farmers promise not to use chemicals, that is already a big gain,” Jiang said.

One of the shoppers here, a magazine editor named Lili Li, showed off the watermelon she just bought. She said it was picked that morning.

“When I buy watermelon at a normal stand, it’s too sweet, almost unnatural,” she said. “I’ve heard rumors that some farmers use an artificial sweetener so that makes me nervous.”

While natural farming is bringing consumers closer to their food, Brubaker cautioned that it may give a false sense of security.

In China, he said, you have to consider what’s going on in the next field over.

“They could be the cleanest most organic farm that took five years to clean out their fields. They could be doing everything right. But it’s the people next door who could be the ones contaminating.”

For now, Li, the architect, continues to shop for vegetables at her neighborhood produce market. But she worries.

“If it’s labeled organic, is it really organic?” Li said. “If it is naturally produced but doesn’t have an organic or food safety label, I worry that it hasn’t been inspected by a third party. What about the packaging process? Is it really hygienic and up to standard?”

Li said she’s not a suspicious person, but doesn’t know who to trust.