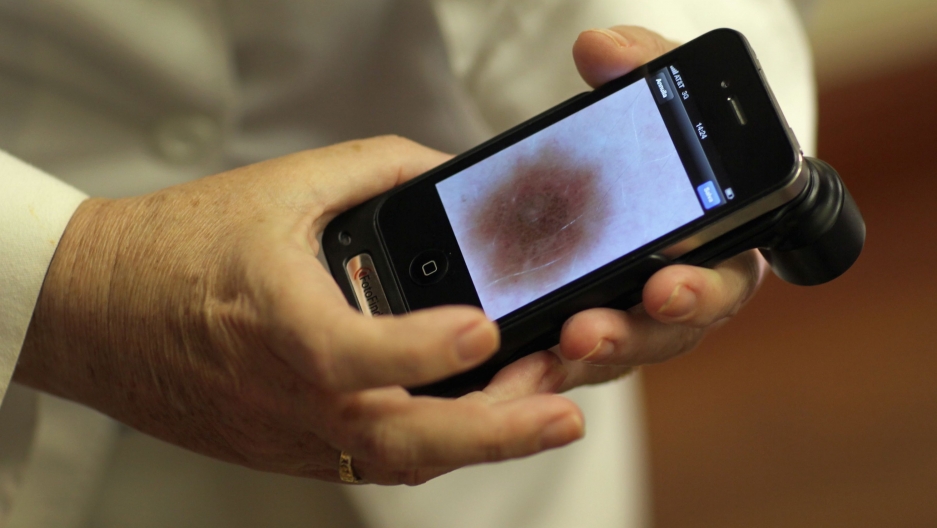 Doctor Antonella Tosti, dermatologist at the University of Miami School of Medicine, displays an image on her iPhone of a mark on the skin of Michael Casa Nova, 12. The FDA has approved a device that helps detect melanoma early.
Credit: Joe Raedle
Share

A new device that detects melanoma — the deadliest form of skin cancer — has been approved by US regulators, according to US news reports

MelaFind, designed by Mela Sciences, is a groundbreaking device that takes "digital images of skin growths" and compares them to a database of thousands of scans for signs of melanoma, the Associated Press reports.

The non-invasive diagnostic can help doctors decide whether to biopsy skin growths in their early stages, device maker Mela Sciences said on its website.

"While there have been incremental improvements in imaging tools for melanoma detection, we still primarily rely on our eyes, experience and judgment," Fox News quoted Dr. Darrell Rigel, a professor of dermatology at New York University Medical School, as saying.

Melanoma is responsible for 75 percent of skin cancer fatalities, according to the Mela Sciences website.

Although melanoma is virtually 100% curable if detected at its earliest stage, one American dies from the disease every hour.

Rates of the disease are on the rise, "especially in younger women," according to the Irvington, NY, based company.

The Food and Drug Administration approved the MelaFind on Wednesday, though only for dermatologists, in the hope of curbing the death rate.

The AP cites National Institutes figures as showing that more than 70,000 people in the U.S. will be diagnosed with melanoma this year, with 16 percent of them diagnosed only after the disease has spread to other parts of the body.

Mela Sciences hopes to launch MelaFind in "high volume" dermatology practices in the Northeast US during early next year, Fox reported.