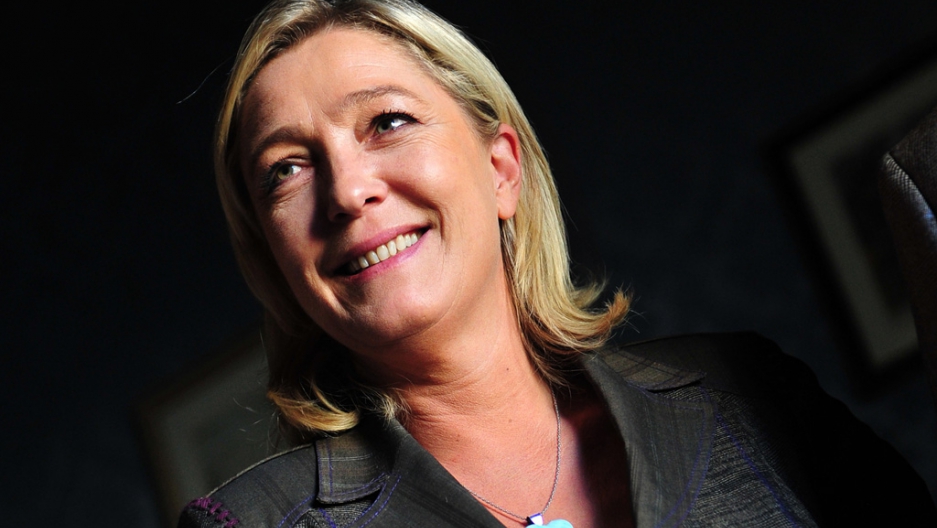 PARIS, France — The French far-right presidential candidate Marine Le Pen has been known to blast “U.S. imperialism.” Her party, after all, is all about chest-thumping French nationalism, so there’s little room for embracing les yankees.

But that was the past. Now she is striving for a softer image. She’s attempting to bring her right-wing party, the National Front, into mainstream French politics.  So this week, she is making an official visit to the United States.

In the summer, when the trip was announced, Le Pen’s party indicated that she intended to meet with Republican, Democrat and Tea Party leaders, intellectuals and “regular folks” in New York, Washington and the heartland.

As the itinerary came together, Tea Party presidential candidate Ron Paul was the marquee name — or more accurately, the only big-ticket name on it. But Paul backed out at the last minute; he cited scheduling conflicts, although he was also the target of Tea Party pressure over the meeting. (Update: Le Figaro reports that Ron Paul reconsidered, and met with Le Pen "for about 10 minutes" today.)

So she came up with another idea. Now, a highlight of Madame Le Pen’s trip will be a stop at Occupy Wall Street. The planned visit, reported by reported by Radio France International, is not specifically indicated on Le Pen’s itinerary, which has her busy meeting diplomats and Republicans on Thursday, and then cryptically mentions a meeting with civil society on Friday morning.

Le Pen clearly hopes that the visit will burnish her credentials as a candidate representing the people.

The question is, how will she will be greeted at Zuccotti Park?

Le Pen does share some affinity with the Occupy movement. She is a consistent critic of global capitalism; before she travels to New York she will deliver commentary on global economic crisis in front of the International Monetary Fund headquarters in Washington, D.C.

But the National Front stands on the extreme right edge of French politics, with an obsession for national sovereignty and its corollaries: closed borders and safe streets.

Critics say the Front’s tough stance on immigration has crossed the line into racism and hate-mongering. When Marine Le Pen’s father and predecessor, Jean-Marie Le Pen, unexpectedly qualified for the second round of presidential elections in 2002, the New York Times called his message “odiously xenophobic, laced with anti-Semitic overtones.”

Jean-Marie Le Pen has indeed famously — and repeatedly — called the gas chambers in Nazi camps “a detail of World War II history.” He has uttered other outrageous comments that have made him a magnet for controversy. A debate usually follows each of his public remarks: should the National Front even be allowed to exist in a democracy?

The effort is bearing some fruit.

A polished, blonde 43-year-old woman, the twice divorced mother of three took the reins in January 2011, after nearly 40 years of her father’s reign on the party he founded.

“She’s striving to banish from her discourse a number of controversial things that made her father persona non grata,” said Jerome Fourquet, director of the opinion department at IFOP, a polling institute.

Against the opinion of several National Front heavy weights, she expelled from the party an elected official who had been seen performing a Nazi salute in a photo published online. She also suspended a party member who blogged his support for the ideas of Norwegian extremist Anders Behring Breivik, who killed 77 people in attacks in Oslo in July.

She has insisted she would not repeal the law granting abortion rights, and she professed her attachment to secularism, a pillar of the French republic. “Obama is more right-wing than me” on certain social policies, she has said.

This approach angers the longtime rank-and-file of the Front National — a motley crew of fierce nationalists, Catholic extremists and even neo-Nazis — but also broadens Marine Le Pen’s appeal. She’s courting, with some success, the working class vote away from the now-moribund Communist party.

More: Occupy London gets help from above?

The strategy seeks to make it socially acceptable at Parisian dinner tables to identify as a National Front voter. In the second round of the 2002 elections, when the choice was between Jean-Marie Le Pen (far-right) and the incumbent Jacques Chirac (right), voters took to the streets and 82 percent picked Chirac. “Anyone but Le Pen,” the French were saying.

Ten years later, as many as 18 percent of voters have said they’ll put a “Marine Le Pen for president” ballot in the box next May. That’s a much higher percentage than her father had received before his surprise showing in 2002. In recent weeks, her poll numbers seem to have plateaued at that level.

When the trip was first announced, Le Pen had sought meetings with Democrats, Republicans, and, most notably, Tea Party leaders. Supporters say the latter is a movement whose electoral success she’d like to replicate. For all its media attention, the Front National holds no seat in Parliament.

“We can’t say we have ideological kinship, but the fact that it’s an anti-establishment group, opposed to the two main parties, that’s interesting,” said Louis Aliot, a leading Front National figure and Marine Le Pen’s domestic partner. He added that she hoped to learn from Tea Partiers’ grassroots organizing and communication skills.

Like the Tea Party, the Front National considers that the system has run amok and that the average, working folks are getting the short end of the stick. When Sarah Palin skewers the Washington elite, Marine Le Pen assails Brussels bureaucrats, who impose their rules and regulations on French citizens, but also Wall Street and a globalized economy that “steals” jobs away from deserving French nationals.

In a country where flags are seldom seen, the Front National extols the virtues of the nation and refuses to relinquish an inch of sovereignty: if elected, Marine Le Pen would take France out of NATO and the euro, and would not submit to the jurisdiction of international courts. The National Front talks tough on immigration, blames Islam for many of the world’s woes and is the only significant party to even speak of “family values.”

But the comparison ends here. “There are great differences in national culture,” Fourquet said. “Each party goes by the sociology, the history and the culture of its own country. Denouncing too much government in France nowadays wouldn’t be a winning strategy.”

So Marine Le Pen’s entire platform is based on a “strong state” to defend the little guy against stronger forces. “There’s a high demand for protection, which, in our culture, befalls first and foremost the government,” Fourquet added.

And that requires a powerful president. Meeting — in front of cameras — with foreign leaders would up Marine Le Pen’s stature as a potential head of state.

“She wants to show she has relationships abroad, to show the American right-wing is taking time to meet with her,” Thierry said. “And next to the Tea Party, she can work on her image as a moderate!”