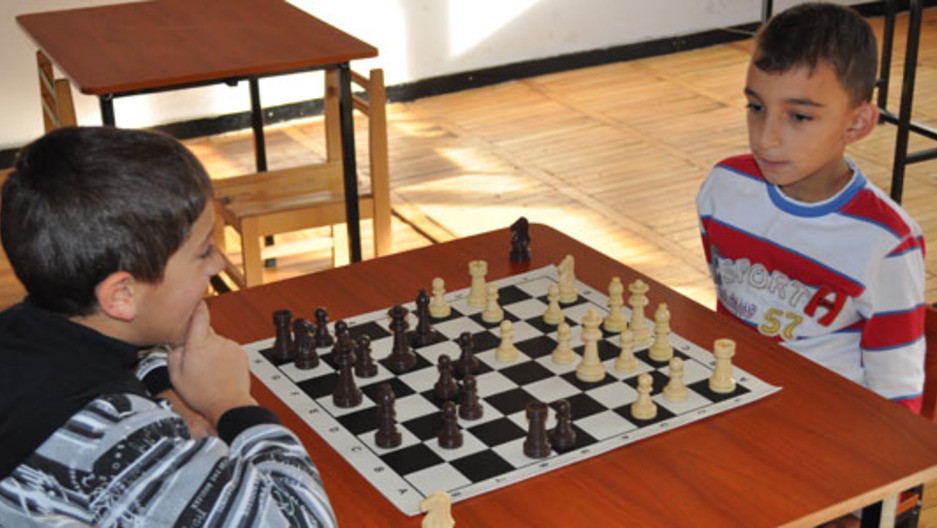 Share
Head for the crossroads of western Asia and Eastern Europe for our Geo Quiz: The country we're looking for is landlocked, mountainous and passionate. Landlocked because it's surrounded by Georgia, Azerbaijan, Turkey and Iran. Mountainous because the Caucasus traverse this region. And passionate? About the game of chess. There are more than 30 Grandmasters among a population of just over three million people. Now schoolchildren are getting an early jump on mastering the game. Can you name this chess-loving country? It is Armenia, where reporter Shant Shahrigian had a look at the chess program in elementary schools: Armenia's public schools started mandatory chess classes for every second, third and fourth grader in the former Soviet republic this year. Twice a week, seven- to ten-year-old Armenians are getting a half hour of instruction in chess basics, with the goal of being able to play a competent game by the end of fourth grade. One of those schools is Public School 81 where Grigor Martikian is drilling 20 second graders on how to move the bishop. He positions a bishop into the corner of a large model board in front of the class. The students follow along on chess mats on their desks. Edouard Aroustian and Seta Kevorkian are both seven and have learned a new checkmate move. When I ask them if they know about Armenia's national chess team, they nod and smile. That team was the pride of Armenia this past summer, when it won the World Chess Team Championship in Ningbo, China. Armenians treat chess champions like star athletes. Chess is one of the most popular games here and there are 32 grandmasters in a population of about 3 million. Smbat Lputian is the president of Armenia's chess academy. He spent the summer organizing training sessions for teachers around the country. Lputian says mandatory chess isn't so much about training the next generation of grandmasters.It is more about fostering critical thinking and imparting values. "Chess is a very honest game, a fair game," says Lputian. "A person learns how to play honestly. It is giving a seven-year-old child a chance to think and make a decision. Chess is probably one of the best games for concentrating one's attention on something for a long time." That said, Armenia probably wouldn't mind if the classes also produce a new crop of chess champions. Lputian says the curriculum begins in the second grade because Armenian psychologists found that was the earliest time students can start to absorb the game. At a private school a few miles down the road, students are also playing chess. The Mkhitar Sebastaci school has had a full time chess teacher for years but chess is just another elective here. The school's principal, Ashot Bleyan says there's a popular view in Armenia that chess is a miraculous tool for fixing the country's education problems. "The simplicity of this approach disgusts me," he says. Bleyan himself is a former education minister but current officials seem set on the compulsory classes. The government has already spent more than $ 2 million on them — a considerable investment for this still developing country.