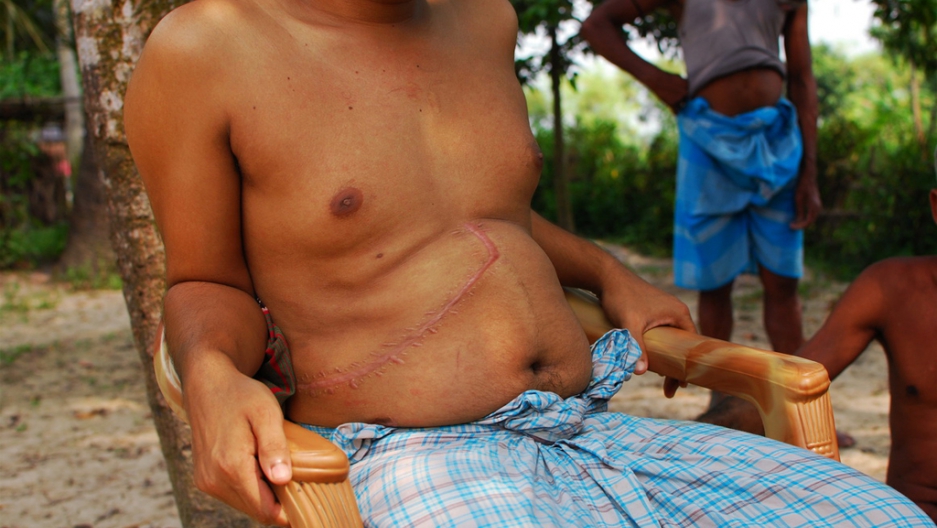 23-year-old Mehdi Hassan, from Bamongram village in northeastern Bangladesh, sold part of his liver to an black market organ broker and received nothing in return.
Credit: Sebastian Strangio
Share

JOYPURHAT, Bangladesh — Mehdi Hasan’s scar runs in a wide arc from his waist to a point just beneath his rib-cage.

The jagged pink laceration still aches, the 23-year-old says, a daily reminder of the operation he underwent in the capital Dhaka five months ago, in the hopes of raising some quick cash.

In exchange for 60 percent of his liver, an illegal organ broker had promised him 300,000 taka ($3,960) — a royal sum in Bamongram, his small village of mud- brick homes and verdant rice paddies in Bangladesh’s northeast.

But when the broker failed to show up after the 10-hour operation, Hasan found himself stranded in Dhaka with nothing but mounting hospital bills and chronic pains in his chest and abdomen.

“He didn’t pay me a single penny,” Hasan said.

In Bangladesh, the trade in internal organs is big business. Each year, hundreds put their body parts up for sale in the underground organ bazaar hoping to escape the clutches of poverty, only to be short changed by brokers or burdened with chronic health problems, according to police officials and residents.

The grisly trade made headlines here in August, when police broke up a network of organ brokers centered on Joypurhat, a district in the northeast of the country. The agents, led by one organ-seller-turned-broker, preyed on poor villagers — many plagued by mounting microcredit debts — promising them a ladder out of poverty.

Given Bangladesh's reputation as the birthplace of Nobel Prize winner Muhammad Yunus' Grameen Bank, it's a rather ironic turn of events — one that exposes a dark side of the country's microfinance success story.

Hasan, a rural day-laborer, said he hoped to use the payment as seed money for a small business. Though he eventually received 145,000 taka ($1,914) in compensation from the family of the sick man who received his liver, the money has nearly run dry, and the pain has impeded his ability to return to work.

“Plowing the land or digging the land is really tough with all this pain,” he said. Like the raised welt cutting a swathe across his belly, “I feel like I’ll have to carry this pain throughout my life.”

Police estimate that 43 people sold their kidneys in Joypurhat, with another 10 or so villagers in the pipeline when the ring leaders were arrested in late August.

Alamgir Chowdhury, a local television correspondent who has followed the story closely, says most people go to the operating table out of desperation. “To pay back the installments on [pre-existing] loans they took out new ones with local money-lenders. They got caught in a web of loans,” he said.

Selina Akter, from nearby Berendy village, went under the knife in July to pay down 400,000 taka ($5,280) in microfinance debts.

“I had a vegetable farming business and it went into loss, and then I had to take loans from another [microcredit] NGO to pay them back,” said the 25-year-old, who received 220,000 taka ($2,904) in exchange for her kidney. Three other members of her family — her husband, father-in-law and brother-in-law — also sold kidneys to alleviate the family’s debts.

In the case of Mahmuda Akter, who is not related to Selina, it was the constant, humiliating visits from debt collectors — pursuing 150,000 taka ($1,980) in microcredit debts — that finally pushed her over the edge.

“When the NGOs came here to collect money from me they harassed me and said bad things, things which cannot be repeated,” said Mahmuda.

She received 250,000 taka for her kidney after an operation in March. Though it helped eliminate her debt, she now regrets having the operation. “I heard from the neighbors that if you donate a kidney you can make some money,” she said. “I feel like I had to sell it because I was under too much pressure.”

According to Fazlul Karim, the police inspector who led the investigation into the Joypurhat organ-trafficking ring, the network was headed by a local man named Abdus Sattar.

While working at a garment firm in Dhaka, Sattar sold his own kidney to a sick man in 2005. Then, apparently seeing an opportunity to profit from the grisly trade, he allegedly returned to Joypurhat and started seeking out potential sellers.

Slowly, police say, Sattar and his agents built up a network that connected kidney patients in Dhaka with willing sellers in the villages, creaming off fat commissions in the process.

Once a willing donor was identified, and brought to Dhaka for the necessary tests, brokers and hospital administrators produced legal documents fabricating a family relationship between the seller and the recipient. (Under Bangladeshi law, only family members are legally permitted to donate organs).

At his office in Joypurhat, Karim showed GlobalPost the documents that “legalized” Mehdi Hasan’s liver transplant — one claiming he was the nephew of the recipient, and another claiming he was the son of the man’s sister. The all-inclusive fee charged by Sattar and his associates would typically range from 400,000 to 500,000 taka ($5,280 to $6,600), but only a fraction of this was actually passed along to the seller.

So far, police have arrested nine people accused of involvement in the Joypurhat trade, including three in Dhaka, and are confident the local organ market has been shut down.

But some say Joypurhat is just the tip of the iceberg. Dr. Monir Moniruzzaman, an anthropologist from Michigan State University who has studied the Bangladeshi organ trade, estimates that roughly 250-300 people sell their organs in the country each year.

If anything, he said, that figure is likely to fall on the conservative side. “Joypurhat represents only a fraction of the trade of Bangladesh. The other parts of the country are unexposed, where the majority of the trade is going on,” he said. “If you combine it the picture is really grim.”

None of the accused were available for comment for this story, but Moniruzzaman said that in his own interviews with organ brokers, most claimed they were helping to save lives — that the sale of kidneys to the sick was “a win-win situation”.

Indeed, the exposure of the Joypurhat organ ring has prompted calls for the liberalization of Bangladesh’s organ-donor law.

Critics of the law say the scant availability of legal donors has created a flourishing black market. “We should make it liberal, so liberal that people cannot make profit out of it,” said Dr. Tareq Salahuddin, the health editor at the Daily Star newspaper. “If it’s open, there can be no way of making someone a loser.”

Mohammed Mozzamel Haque, the Joypurhat police superintendent, said the law needs to create a new regulatory board to establish family links between donors and recipients, utilizing DNA tests if necessary.

He argued that the law should also be amended to allow “emotional” donors — those with close non-familial relationships to recipients. “Sometimes blood relatives are not willing to donate kidneys, but friends should be able to donate a kidney. But the present law does not permit it,” he said.

Others warn that legalization would only succeed in turning the body parts of the poor into commodities for the wealthy. “It’s an unequal, unjust system where the rich can afford to buy [organs] and the poor are selling their own body parts,” said Moniruzzaman from Michigan State University. “It is expanding every year, so the law has to be stricter.”

He said the country’s demand for kidneys or other organs could easily met by establishing a cadaveric organ donation system similar to that in many Western countries — something he said would be a “moral and ethical” source of life-saving organs.

There are few studies showing the health effects of organ donation on the rural poor, but Moniruzzaman said that based on his interviews with organ sellers across Bangladesh, many suffer from post-operative pain, intermittent fever and body-weight problems.

But the most lasting cost he saw was often not medical, but psychological.

“Some sellers said they feel they are living like sub-humans,” he said, “as if they sold one of God’s gifts.”