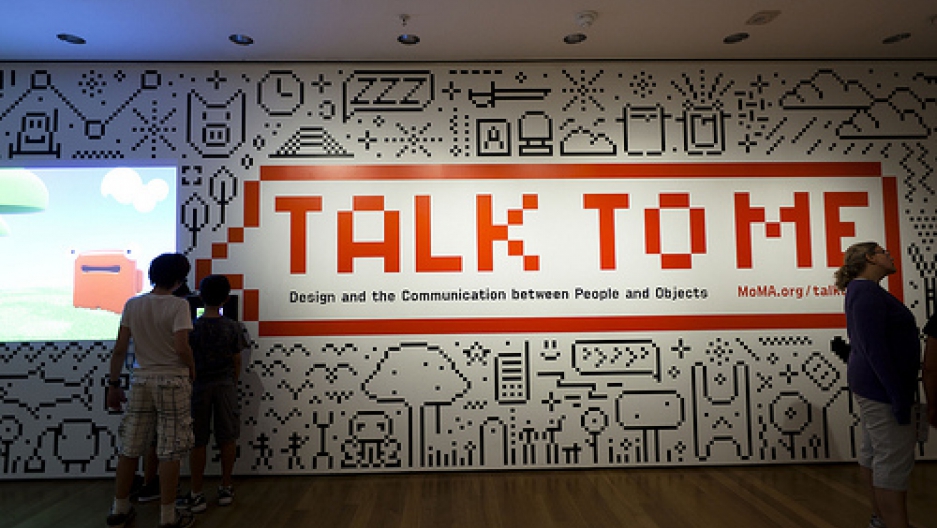 The Talk to Me exhibit at the Museum of Modern Art in New York is drawing huge crowds. (Photo by Flickr user Dan Nguyen, cc-by-sa)

When you wake up in the morning, you probably tell your phone to look for any calls or messages you missed.

You might tell your coffee pot to brew you a cup of coffee. You tell your car to start or your computer to run.

Every day, we talk to objects. A new exhibition from New York's Museum of Modern Art, Talk to Me, seeks to look at and explain that relationship we have with our objects.

Paola Antonelli, the senior curator of architecture and design at MoMA said crowds have been packing into their galleries to explore the exhibit.

"I'm interested in exhibits that have ancient themes brought back by technology." With this exhibit, they've done that, she said.

Antonelli said that humans have had a relationship with objects since the dawn of time, but the ascent of digital technologies has made that relationship much more explicit. It's quite clear that we tell a computer to launch a program, whereas it may not have been so plain when we told a tractor to plow.

One object on display at the exhibit is a New York MTA subway ticket vending machine.

It's a "sturdy, burly machine that just sits there with big patches of enamel and primary colors. The hardware and the software are equally burly," Antonelli said. "You can imagine burly guys from the MTA poking at the machine."

Also in the exhibit is a simple game, Passage, that lasts five minutes and walks the person through the phases of life, ultimately leading to death. Check out a video of the game.

Antonelli said designers are giving more thought than ever to the communication that will go on between users and the objects and softwares they're creating.

"This is about scriptwriting, or knowing what is going to happen when the object or software is released into the world," she said.

And that made it perfect for an exhibition at MoMA.