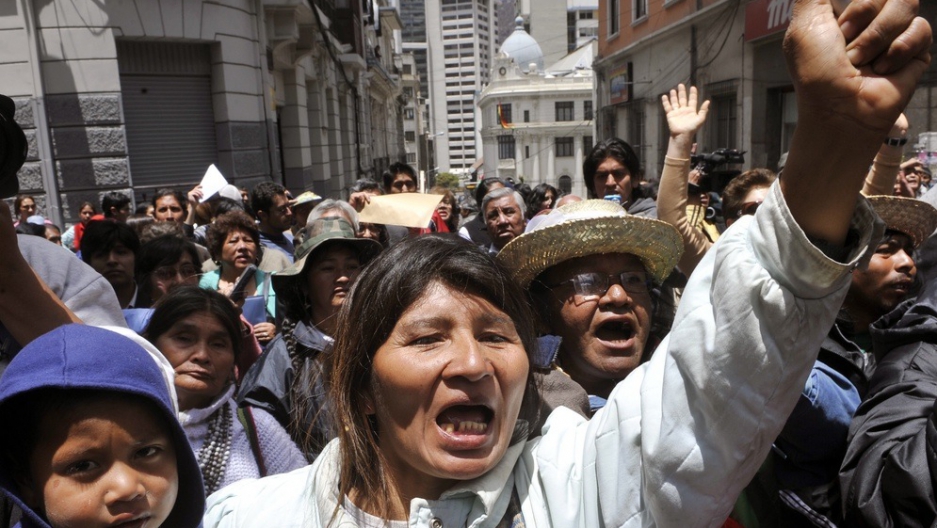 Demonstrators march against a planned road through the Amazon.
Credit: Aizar Raldes
Share

Now, with Morales battling to save his legacy after his administration brutally attempted to suppress a peaceful protest by native Amazonian communities, that alliance appears on the brink of cracking up.

The pressure began building last month, when riot police gassed and arrested demonstrators on a month-long march — from their sweltering home province of Beni up 10,000 feet to the Andean capital La Paz — against plans for a road through the TIPNIS, the Spanish acronym for their rainforest reserve.

Politically and economically marginalized, first peoples would seem obvious allies of the left's social-justice agenda. Yet across Latin America, a series of progressive governments face stiff opposition from indigenous groups.

Nowhere is the cultural contrast between the left and traditional indigenous values starker than on environmental issues.

Although the new wave of left-wing leaders advocate more sustainable models of development, their talk of “natural resources” remains alien to indigenous conceptions of nature, including the Andean notion of the bounteous Pachamama, or Earth Mother.

Crucially, many Latin American economies are still heavily reliant on raw commodities, such as crude oil and metals, which provide the cash to fund leftist governments’ social programs and more equitable economic development.

For some, the falling out comes as no surprise.

“The left in Latin America has never really addressed indigenous issues,” said political scientist David Sulmont, of Lima’s Pontifical Catholic University. “Its discourse has been about class, and it has tended to see indigenous peoples as rural poor, campesinos, rather than acknowledge their different cultures or identities.”

Others question whether the new wave of left-wing governments has even benefited indigenous peoples economically.

Ecuador President Rafael Correa wooed indigenous people in his country in 2006 with campaign speeches in the Quechua language. But since his election, he has refused to give native communities legal autonomy and excluded CONAIE, the national indigenous umbrella group, from a constituent assembly on the grounds that it was not a political party.

Sociologist Wladimir Sierra Freire, of Quito’s Pontifical Catholic University, told GlobalPost: “In terms of a fairer distribution of income, there is not a big difference between this government and previous governments.”

One of Correa’s flagship projects in Ecuador has been a bid to leave the vast Ishpingo, Tiputini and Tambococha oil reserves below the Yasuni rainforest — home to some of the last indigenous groups living isolated from the outside world — in return for a multi-billion dollar international compensation fund.

But as the money trickles in, Correa is now warning that he may have to open up Yasuni to drilling. Freire, the sociologist, described the president’s green posturing as purely “rhetorical.”

In Brazil, the administration of President Dilma Rousseff, a former guerrilla, has been at odds with Amazonian communities over plans for a series of massive hydroelectric dams in the rainforest, an old dispute that caused serious friction between indigenous groups and Rousseff’s predecessor, former union leader Luis Inacio “Lula” de Silva.

Meanwhile, Peru’s new government also has its work cut out to win indigenous backing despite quickly passing a long-awaited law requiring consultation with native communities over infrastructure projects planned for their territories.

After 500 years of slavery, massacres and dispossession, the country's native peoples are not about to drop their guard so quickly in response to a measure that is, some believe, more a gesture than a substantive change.

In the same breath AIDESEP, the largest organization representing Peru’s myriad Amazonian ethnicities, welcomed the law and warned: “This government has adopted the mania of its predecessor. It does not consider indigenous peoples as Peruvian citizens.”

Even Morales, who has called for climate reparations and took Bolivia on a lonely stand against the Copenhagen climate agreement — which he said condoned ecocide — has been unable to escape his country’s dependence on exports of oil, natural gas, zinc and tin.

And it is the migration of the Aymara, who broadly favor the TIPNIS road, to the Amazon that is at the root of Bolivia’s current convulsions.

“Those in the Andes live in a different ecosystem, one that is arid, much more difficult. When they migrate to the rainforest they tend to strip the land, and destroy the ecosystem,” said Maria Teresa Vargas Rojas, head of environmental group Fundacion Natura Bolivia.

“That is why local people are so afraid of this road. It will increase migration that will destroy the rainforest.”

The police crackdown on the TIPNIS marchers triggered outrage across Bolivia. Within days, a contrite Morales, denying he had ordered the operation, suspended construction of the road. Meanwhile, the march resumed and arrived in La Paz, to cheering crowds, earlier last week.

Morales now has three years left of his current term to regain the trust of many of his country’s ethnic groups. His ability to achieve that goal will reveal much about the political left’s ability to close the gap that has opened with up with the region’s indigenous peoples — a gap Morales’ personal story once appeared to bridge.