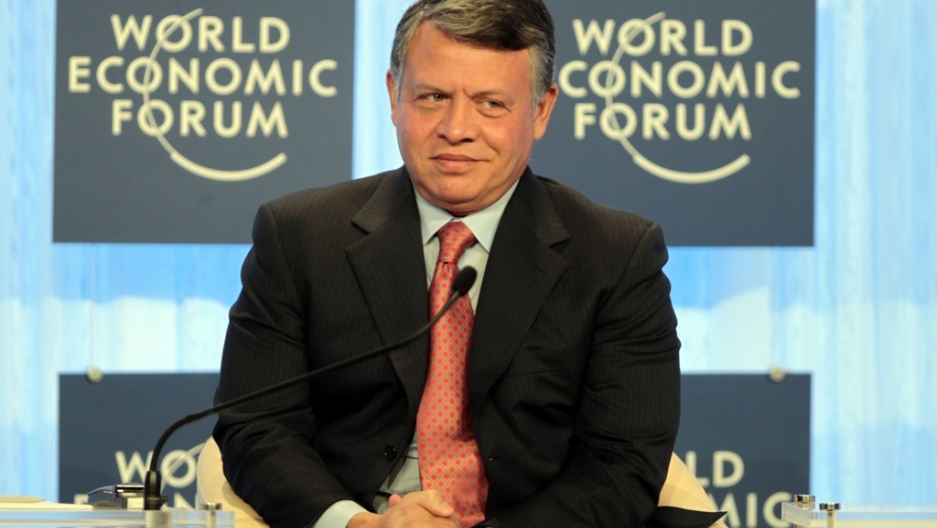 DEAD SEA, Jordan — There is a frisson of crisis in the air here as a thousand people from more than 50 countries meet to discuss the economic realities of the Arab Spring, under the auspices of the World Economic Forum.

Sleek sheikhs, bespoke-suited businessmen, a few women, diplomats, government ministers and a couple of kings have come to the lowest place on earth to take part in the Forum’s “Special Meeting on Economic Growth and Job Creation in the Arab World.”

King Abdullah II of Jordan is the official host, and he welcomed his fellow monarch, King Juan Carlos of Spain.

It seemed fitting that the latter would be here, given that the Arabs ruled Spain until they were expelled in 1492, and the influence of these Andalusian refugees can be seen in the culture and architecture of North Africa to this day.

The twin deaths of Col. Muammar Gaddafi and Sultan bin Abdul Aziz Al Saud, the crown prince of Saudi Arabia, hang over these discussions: the one welcomed, the other regretted, adding to the uncertainties of these tumultuous times.

The superstar of this session is Mahmoud Jibril, chairman of Libya’s National Transitional Council. Amidst congratulations that the shadow of Gaddafi no longer falls on his land, Jibril said: “I didn’t think I would live to see this day.”

King Abdullah, who is facing unprecedented unrest and criticism in his own country, opened the conference this morning laying out four “gates” that the Arab world needed to pass through: The gate of dignity, the gate of opportunity, the gate of democracy and the gate of peace and justice.

He spoke of the unresolved Israeli-Palestine conflict, and put in his plug for a two state solution. The lack of Israelis here is in sharp contrast to previous “Davos in the Desert” sessions, as this regional meeting is sometimes called. It used to be that high Israeli officials could meet here with Arabs in an informal session. But not this year, as Israel’s isolation deepens.

The crisis that everyone recognizes is that much of the Arab world has now undergone a revolution of sorts, but it is a leaderless revolution, at least so far. And the common consensus is that economic, and perhaps social conditions, are going to get a lot worse before they get better. This was true of Indonesia after Suharto, the Philippines after Marcos, and Eastern Europe after the first euphoria of release from Soviet power, one delegate said.

Sheikh Hamad Bin Jassim Bin Jabr al Thani, prime minister and foreign minister of Qatar put it well when he said: “The Arab region is the youngest region in the world, as half its people have not yet reached the age of 30.”

In the West Bank and Gaza, half the population is 18 or under, Palestinians said. And the amount of unemployment among these youths is staggering. Nothing can be more dangerous than educated youths for whom there are no jobs. As you might expect, many people here attribute the Arab Spring more to economic hardship rather than a yearning for democracy, which is the Western narrative.

Ibraham Dabdoub, of Kuwait’s national bank, called for a new Marshall Plan for the Arab World. But Libya’s Jibril brought him up short by saying that it wasn’t a question of money, it was a problem of “mind set.” The Arab world needed to begin thinking in new ways. The fact that Arab states traded so little with each other, that Arabs needed visas to get from one country to another, was bemoaned. Free movement of capital is too restricted, delegates said.

Listening to conversations in corridors, and in more formal panel discussions, it was clear that there were major differences in how each of the Arab countries was reacting toward its Spring. The proud citizens of the Gulf countries, and Saudi Arabia, with their vast oil resources have been able to buy off dangerous discontent — at least so far. While the North African countries, Syria, and Yemen, have undergone — or are still undergoing — upheaval. Tunisia is about to have an election, while Syria is near to civil war. And make no mistake: Syria is a hundred times more important in the Arab world and beyond than Libya.

The European financial crisis, the threat that Greece has posed to the Euro zone, looms large here, especially among the North Africans who are so dependent on doing business with Europe. Automobile parts, for example, are one of Tunisia’s most important exports. Staggering Arab economies could be further reduced if Europe stops buying as its economy contracts.

There was a sense of American power and prestige passing. The political deadlocks have made a great impression in the Arab world. Many spoke of Turkey’s rising influence.

Another problem under discussion here is that of privatization, the lessening of centralized economies has caused more unemployment than before. The idea that government is always going to give you a job is no longer the safety net it was. Privatization has also led to corruption, as the spoils have gone to cronies. This is a major problem here in Jordan.

Nobody here can really say how the Arab Spring will work out, or how these societies are going to create the jobs that are necessary — 25 million within the next decade, according to some calculations.

So despite all the joy over the death of Gaddafi, there is fear here, fear that the expectations of youths cannot be adequately fulfilled. Fear that, now that the tyrants have gone, the governments that follow will not be able to survive in a sea of troubles.

Could the Arab Spring turn into a World Spring, one delegate wanted to know? Is a new depression going to cause uprisings everywhere?