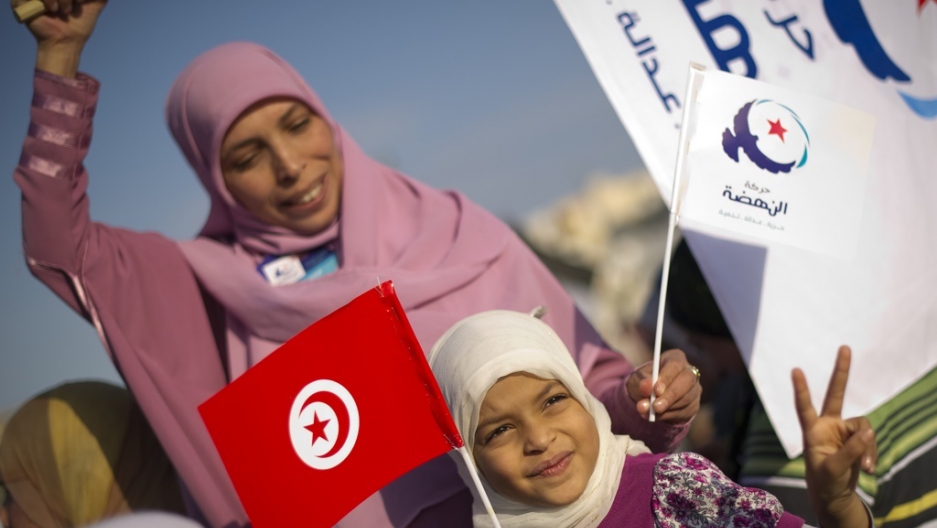 A Tunisian woman and her daughter attend a rally of the Islamist Ennahda party in southern Tunis on Oct. 21, 2011.
Credit: Lionel Bonaventure
Share

TUNIS, Tunisia — The headquarters of the political party of Tunisia’s former dictator, Zine El Abidine Ben Ali, once both palatial and imposing, is now just a lonely hulk of a building — guarded by a lone tank, its shattered windows boarded up, and weeds sprouting up in the cracks of its marble steps.

Down the street, on one of the busiest avenues of the sun-drenched capital, Tunis, Tunisian youths fire sharp questions at candidates from a political coalition formed for Tunisia’s upcoming assembly elections, which includes remnants of Ben Ali’s old party, the Constitutional Democratic Rally.

“We are asking you very basic questions about how you want to rule, and no one can answer us,” one young man says with bravado to Rassaa Mounira, an older, female candidate. “What is the point of the coalition if you cannot tell us what you stand for?”

Both scenes — unthinkable just a year ago in Ben Ali’s two-decade-long police state — are a testament to the monumental political changes this tiny North African nation has undergone since its month-long popular revolt ousted the dictator last January.

Tunisia: The making of the martyr that sparked the Arab Spring

Tunisia’s revolution, kicked-off in December under a wave of discontent over poor economic conditions and unemployment, sparked protests across North Africa  that toppled dictators in both Egypt and Libya.

Now, the discourse in Tunisia, a small nation of 10.4 million people, is wide open for the first elections of the Arab Spring — and what many observers say is a litmus test for the political future of the rest of the Arab world.

Tunisian voters will go to the polls Sunday to elect a 217-member constituent assembly tasked with drafting the country’s new constitution.

With more than 100 political parties and more than 10,000 candidates — from Communist to Islamist, secular and environmental — Tunisians are unsure what to expect from their first genuine elections since their independence from France in 1956.

“If it can happen here, others have a chance,” says Hamadi Redissi, professor of political science at Tunis University of al-Manar. “If it doesn’t work here, it will work nowhere — and we can put a big, red ‘X’ over the Arab Spring and forget about it.”

While Tunisia has experienced the most peaceful transition of power in the region since the unrest began — with little if any violence as the caretaker government prepared for elections over the past nine months — residents here are visibly worried Sunday’s polls may be a catalyst for instability.

On Oct. 10, conservative Salafi Islamists violently protested a private television channel’s airing of the French animated film "Persepolis," which in one scene depicts a cartoon version of Allah. A strict interpretation of the Koran says images of God and his prophet are forbidden.

Many secular Tunisians, some of the most ardent in the region, were rattled by the display of fundamentalist force, and worry that an Islamist victory at the polls would spell the end of some of their most cherished rights — including some of the Middle East’s most progressive safeguards for women.

Some accused the leaders of Tunisia’s mainstream Islamist Ennahda (Renaissance) Party for being too soft on the Salafi protestors. Banned for years under Ben Ali’s regime, Ennahda is now polling at between 25 and 30 percent, the highest of any political party ahead of the elections.

The most serious runner-up, the center-right and secular Progressive Democratic Party (PDP), is expected to win approximately 15 percent of the vote.

“Ennahda’s base is not controlled enough by the party’s elite,” Emna Jeblaoui, a female rights activist and Islamic studies scholar, said of the appearance of more fundamentalist Islamists here.

“Tunisians, we respect our identity, our Arab and Muslim identity, but we can have that and have an open society,” she said. “We don’t want to see red lines when it comes to art, poetry cinema — we don’t have to be in conflict with the Occidental world.”

“I am confident that Ennahda is moderate enough to safeguard women’s rights, and the right to freedom of expression. They will not go down another path,” said Mounji, 45, a retired interior ministry official and Ennahda supporter in Tunis.

But observers fear Ennahda will use the divisions to stoke greater opposition to the elections if they fail to win a majority. Rachid Ghannouchi, Ennahda's leader, is reported to have said that his party must win.

“Ghannouchi said that if there is electoral manipulation, he will topple 10 governments if necessary,” Redissi said. “He says this just a few days before the poll — is this responsible? Will there be chaos if he doesn’t get a high score?”

Election monitors are working hard to establish presence across the country to stave off accusations of manipulation or fraud. Approximately 5,000 Tunisian observers have been trained and certified to monitor the vote, said the Higher Independent Elections Commission here.

“We don’t care about who is going to win — whether we have an Islamist or secular state — but make sure we reach this point properly,” said Ayman bil Abdul Rahman, secretary-general of I-Watch, a new watchdog group in Tunis. “We must do it in a proper and peaceful way. We paid a lot to reach this stage.”