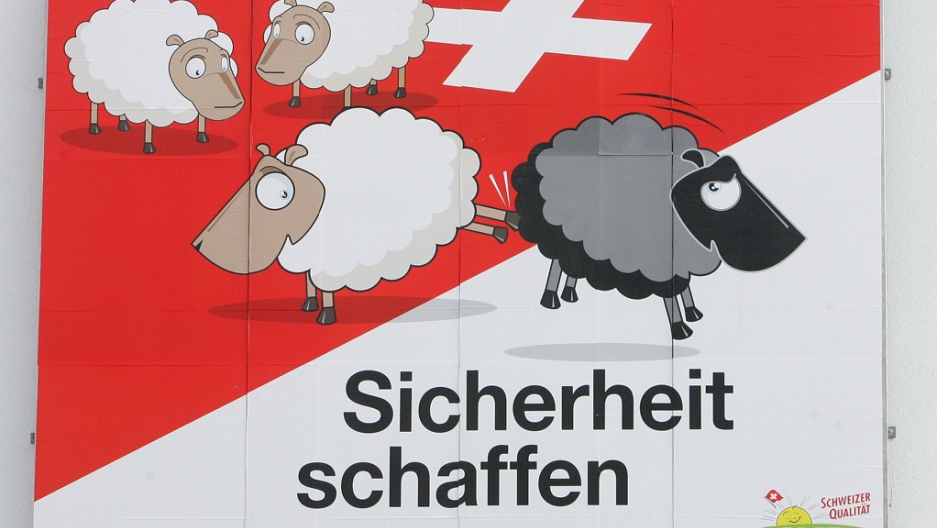 An election poster of the Swiss People's Party (SVP) for the Switzerland's 2007 federal elections hangs in Basel. The party has come under heavy international criticism for leading a campaign that emphasizes sharp measures against immigrants.
Credit: Ralph Orlowski
Share

ZURICH, Switzerland — “If I see you on the street, I am going to run you over with my car, you piece of shit.” That virulent email arrived on Sept. 18, says Ivanic Petrusic, a socialist lawmaker in the regional parliament of the canton of Aargau. It was one of more than 200 similar messages that Petrusic has received in recent months.

Why all the hatred? His opponents accuse him of endangering Swiss society and threatening its flag.

Petrusic, 34, is vice president of Secondos Plus, an association for Swiss-born children of immigrants. In an attempt to make people reflect on the country’s evolving identity, he used a symbol to spark the debate: the three-striped banner that was once the official flag of the Swiss confederation. He said he believed the flag — lacking the white Christian cross that rests at the center of the current one — better represents today’s multicultural Switzerland.

An uproar ensued, across the internet, in the press and among politicians.

Such virulent reactions to immigration and diversity have become common in Switzerland. In the federal elections on Sunday Oct. 23, anti-immigrant sentiment is expected to advance the position of the far-right Swiss People’s Party (SVP). Since 1995, the SVP has managed to double its share of the vote. According to recent polls, the SVP is poised to garner nearly 30 percent of the votes here on Sunday. That’s a level that no other party has ever managed.

In Switzerland’s unique federal system, that would mean the party would gain additional seats in the legislature and possibly more representation in the Federal Council, the executive branch of government. That will only be decided in December after lawmakers in parliament vote on the composition of the Federal Council.

More than 22 percent of Switzerland’s population is foreign. In some towns, the number reaches more than 50 percent. Analysts say the SVP is singularly responsible for turning what was once a peaceful and diverse nation into a minefield of integration problems.

“The SVP is clearly to blame for this aggressive atmosphere,” said Sandro Cattacin, a professor of sociology at the University of Geneva. “The topic of immigration is very hot, so you have to be extremely careful with what you say because the Swiss, or a selection of them, take offense [over the issue] incredibly fast.”

Petrusic’s critics don’t understand that Secondos Plus had no desire to replace the current flag, he says. He was merely using the old one to raise awareness of a period in Swiss history during which naturalization was straightforward, giving immigrants representation among the electorate.

Regardless, conservative politicians and extreme right radicals seized the opportunity.

“Most told me that I should shut up and just be glad that I could live and work here,” said Petrusic, who arrived in Switzerland as a political refugee from the former Yugoslavia in 1991. He has held a Swiss passport since 2004.

“I was, and I am still, very afraid” about the threats, he told GlobalPost. He said he is particularly concerned about his brother and sister, who have also received menacing mail.

Petrusic is hardly alone among politicians and academics who receive threats after addressing immigration.

Cattacin, one of the foremost experts on immigration in Switzerland, has faced similar threats, inspired by his research.

“I was afraid after the severe attacks I received by mail and phone,” Cattacin said, explaining that the events changed his life. His private phone number is no longer published and he never mentions his family in public.

Petrusic, who is running for the Swiss Parliament’s lower house, said: “I am thinking about quitting politics. but I haven’t made up my mind yet.”

Josef Buetler, the mayor of Spreitenbach in northern Switzerland, has.

The Free Democratic Party (FDP) representative announced his resignation on Sept. 30 after three years leading the local government. For months, Buetler, 43, had received insults and threats on his life for his pro-integration policies in Spreitenbach, a town of 11,000 inhabitants in which 51 percent of the population is of foreign origin.

Someone broke into his office last year and spread more than 7 gallons of human feces around it. He finally quit after his family started receiving anonymous calls at home. The threat level remained steady for a while, but increased after he appeared on a TV show defending the Kosovar community, who make up 25 percent of the foreign population in Spreitenbach. “Immigration [is] an enriching challenge” for Spreitenbach, he said.

The case of Buetler “[broke] a taboo” in Switzerland, Renate Gautschy, president of the Associations of Municipalities of Canton Aargau told the Neue Zuercher Zeitung. “There are a lot of politicians who resign because they cannot stand the harassment anymore, but they instead claim [their decision] has to do with health or personal reasons,” said Gautschy, a Free Democratic politician.

Neither Buetler nor other members of the local government agreed to talk to GlobalPost about the issue. In an e-mail, Spreitenbach spokesman Juerg Mueller wrote “the local council has no problems with the integration of foreigners” even though “the task” continues to be “an ongoing challenge.”

Meanwhile, the SVP’s provocative campaign against foreigners continues. Images of the party’s xenophobic posters have become infamous around the world. In 2007, SVP posters depicted three white sheep kicking a black sheep out of the Swiss map; in 2009, they featured minarets resembling missiles; in 2009, in advance of a vote to open its borders, the posters showed black crows picking at Swiss flag. And in 2010, the party used Slavic Balkan names to talk about foreign criminals.

“What they are doing to this country is disastrous,” said Cattacin.

Others say the phenomenon is a relatively recent development.

“20 years ago it would be unthinkable to hear politicians talk like the SVP does about immigration,” said Petrusic.

But Oskar Freysinger, one of the most outspoken SVP members in parliament, says the party reflects a large segment of Swiss society.

“Nobody who is well-educated becomes [radical] from one day to the next just because he sees a poster,” he said. “[The SVP is only] putting issues on the table that have to be discussed. Freedom of speech is the first thing that is granted in a democracy.”

Freysinger says that it is counterproductive not to speak about immigration policies: “As long as there is a debate, you diminish the aggressiveness of people because they can express themselves and they don’t nourish their minds and hearts with hatred,” he said.

Freysinger points out that the right is not immune to attack. Over the past 10 years, he said, he has also been threatened and physically assaulted: An arsonist burned down one-third of his house; he has been spit at, struck, faced flying bottles and even a cake of shaving foam.

“If I did not get police protection [during every public event], I would have been knocked down by now,” he said, adding that Buetler and Petrusic are showing themselves weak for giving in to it. “I had far more brutal aggression directed against me, and I did not resign.”

Political analyst and immigration expert Marc Helbling says that integration and immigration issues are a “minefield in Switzerland” but denies the situation is more problematic than in other European countries such as France, Germany or the Netherlands. Helbling, who works with the Social Science Research Center in Berlin has also been attacked via email for his work, but he does not think the “climate will escalate and get worse.”