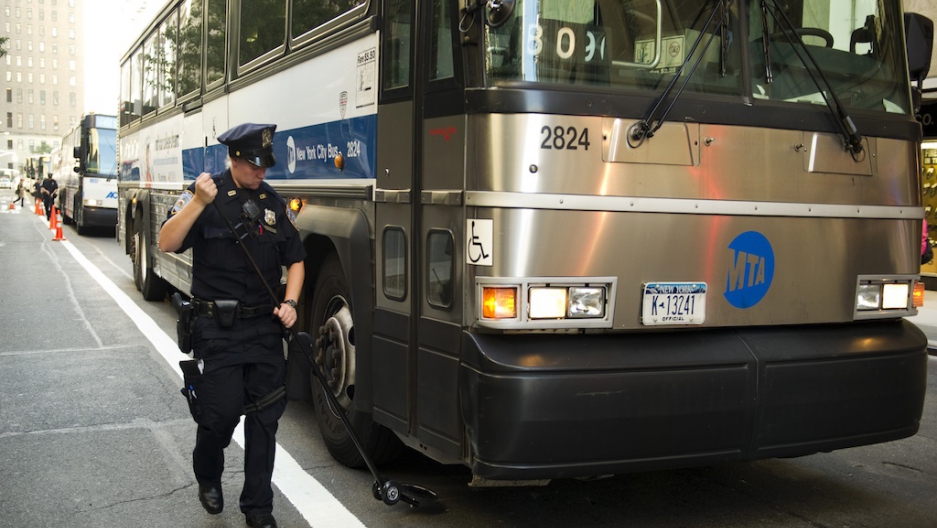 A New York City bus service is under fire for forcing women to sit at the back of the bus. Here a police officer inspects a bus from a different service on Sept. 9, 2011, in New York.
Credit: Don Emmert
Share

New York City has threatened to close a bus service run by Orthodox Jews if it doesn’t stop segregating its seats and forcing women to sit at the back of the bus, according to Time.

The Private Transportation Corp., operates the public B110 bus under a franchise agreement with the city,  It has been heavily criticized after news reports made known that the bus makes women "give up their seats in the front to promote Hasidic customs of gender separation," Reuters reported.

According to Fox News, the executive director of the city’s Department of Transportation (DOT), Anne Koenig, has asked the bus service to respond to the allegations. Private Transportation Corp. has declined to comment.

"Please be advised that a practice of requiring women to ride in the back ... would constitute a direct violation of your franchise agreement and may lead to termination of that agreement," Koenig wrote in a letter to the corporation, according to Reuters.

The bus line — in operation since 1973 — runs in a predominantly Hasidic Jewish area and does not run on Friday nights or Saturdays, which follows the Hasidic custom of observing Shabbat, or the Sabbath rest.

For men and women in ultra-conservative religious traditions, keeping the sexes separate is still fairly routine. Women often sit behind men or a barrier in mosques. The Amish also require different seating areas in worship services. And Hasidic Jews similarly require men to sit or walk in front of women since even seeing them would violate purity.

The DOT will not accept religious grounds as an excuse, Fox New reported.

“No exception from ... these [anti-discrimination] requirements has been given to your company,” the letter stated.

In separate instances, two female reporters covering the story were told by bus drivers that they were not allowed to sit in the front of the bus because it was reserved for male passengers. According to Reuters, the story came to light after a student from the Columbia Journalism School reported the story.