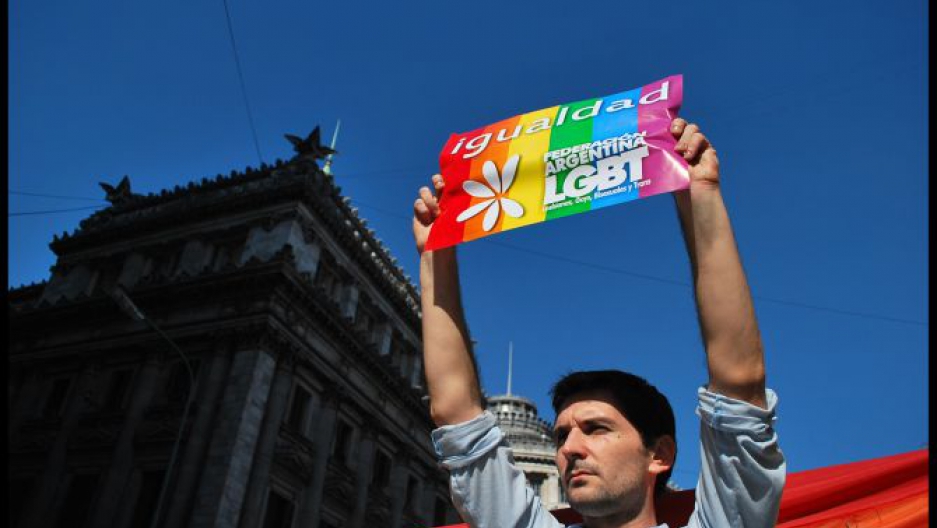 A man holds the same “equality” sign in the plaza in front of the Congress building where the Deputies debated.
Credit: Vero Capriglioni
Share

BUENOS AIRES — The decision finally came at around 4 a.m., broadcast live to the thousands who had traveled from every province — young and old, gay and straight — huddled together around small fires outside the National Congress building in Argentina’s capital.

After 14 grueling hours of debate in mid-July, the Senate voted 33 to 27 to approve La Ley de Matrimonio Igualitario (the Equal Marriage Law), making Argentina the first Latin American country to grant same-sex couples the right to marry and the critically important benefits that accompany the union.

“When we heard the approval, our differences ceased to exist,” remembers Verónica Capriglioni, a leader of the lesbian and bisexual women’s group La Fulana. “At that moment everyone in the plaza felt the same; we shared that feeling and we celebrated it. We hugged and we cried and we screamed. We felt love and happiness. We were all equal.”

But old stereotypes still run deep in Argentina. Despite its elite status as one of 10 countries with legal same-sex marriage and a progressive leader in South America, the reality is that homosexuality remains a taboo topic and violence persists, particularly outside the city of Buenos Aires. Conservative cultural beliefs prevail even as the Roman Catholic Church’s influence wanes, and the LGBT community is painfully aware that progressive laws don’t necessarily guarantee progressive behavior.

As Capriglioni, a slender 31-year-old with a sweet smile who goes by "Vero," often reminds friends and peers, “Lesbophobia, transphobia, homophobia still exist even if there are laws.”

Even in those magical hours of July 15, 2010, when the Senate passed the bill, Vero and other activists could feel a hint of despair nagging within the thrill of victory. Still raw were the emotional wounds of discrimination and hostility, of being called sick and mentally ill, of being labeled child abusers and of being publicly humiliated, most recently at a protest organized by the Catholic Church just days before the scheduled July 14 vote.

So although the Senate approval was the product of years of groundwork, it was in many ways just the start of the battle for equality.

“This just recently began, it didn’t end with the law,” said Gregorio Tobar, a former Catholic priest who is now a dedicated leader in the ecumenical LGBT Metropolitan Community Church (ICM) in Buenos Aires. “The time to raise awareness has now arrived.”

With a spike in gay tourism in recent years, the federal capital is known for being relatively LGBT-friendly, but the outer provinces are much less so. Many individuals and communities still deny same-sex couples the right to speak openly about their sexuality, let alone show public affection without fear of retribution. In certain areas, some schools have refused to implement lessons on sexual diversity, newly required by the Ministry of Education as part of the Equal Marriage Law. And the country’s anti-discrimination law still doesn’t include sexual orientation.

That became painfully clear in the recent conviction of Daniel Torres, who received 14 years in prison for killing his stepdaughter’s girlfriend, 27-year-old Natalia Gaitán, with a shotgun in what prosecutors argued was a hate crime. But despite all evidence indicating that Gaitán’s sexual orientation and masculine demeanor were motives for the murder, the two judges in the case elected to treat it as an act of domestic violence.

“The problem is that the society that has this progressive new law isn’t prepared for it,” Tobar lamented.

Tobar, who spent 14 years in a parish in Córdoba before leaving five years ago and moving to the capital, believes that the task of fostering discussion falls to community leaders.

“We need to take advantage of all space, public and private, to create awareness,” he believes. “Gay people are scared and wounded, they have suffered a lot of rejection. They don’t know how to give clear reasons to defend themselves. We have to help them raise their voices, so that we reach every part of society.”

Long before national political leaders latched on to the legislation, either for or against, LGBT activists had built the foundation for its passage. On February 14, 2007, La Faluna founders María Rachid and Claudia Castro, went to the Civil Registry in Buenos Aires and submitted the first-ever marriage request by a same-sex couple.

“It was then that the demand for marriage between same-sex couples was made public for the first time,” writes journalist Bruno Bimbi in his book detailing Argentina’s path toward equal marriage. The Federación Argentina de Lesbianas, Gays, Bisexuales y Trans (FALGBT), a coalition of LGBT rights groups founded in 2006, kicked off a national legalization campaign the same day.

Its slogan, Los Mismos Derechos con Los Mismos Nombres, or The Same Rights With The Same Names, quickly became a demand voiced from every corner of the country.

Argentina: Cristina turns it around

In the days leading up the vote, Cardinal Jorge Bergoglio, archbishop of Buenos Aires, had called it a “destructive attack on God’s plan” and drew 60,000 people — including students in parochial schools who were let out early to attend — to the same plaza where celebrations of the new law would later occur.

The Cardinal and Church hierarchy were following the orders of a conservative Pope Benedict XVI and the Vatican power structure he has created.

“The Church’s arguments didn’t work out very well for them,” the activist Vero said with a tone of contempt. “They didn’t have a valid scientific or social basis. They were simply insults against us. Many Catholic people heard this and started questioning the Church, and distancing themselves from it.”

The marriage debate surfaced a glaring disparity between Church leaders and the majority of Argentinians. Despite the fact that Argentina is officially a Catholic country, as stated in its Constitution, the Church plays a minor role in party politics. And although a vast majority of the population is indeed Catholic, a relatively low 22 percent attend weekly services.

In a speech from Beijing days before the Senate vote, Kirchner, often characterized by her liberal position on social issues, positioned herself squarely against the Church’s influence in the political sphere.

“[Church leaders] are portraying this as a religious moral issue and as a ‘threat to the natural order,’ when what we are doing is looking at a reality that is already there,” she said. “It would be a terrible distortion of democracy if they denied minorities their rights.”

The reality that Kirchner referred to in her speech is, of course, relative. In the 15 months since the adoption of equal marriage, over 3,500 same-sex couples have wed in Argentina. But social change often moves far more slowly than the political process.

“A law is usually the product of a reality,” Tobar, 46, who celebrated three years with his partner in May, believes. “But here we did it the other way around.”

As a teacher, it has been difficult for Vero — and still is, despite living in Buenos Aires and having moved on to teach at a non-Catholic school — to be open about her sexuality in the workplace. She told a moving story about how, in a moment of frustration on the day of the Church-organized anti-marriage protests, she finally came out to her Catholic-school coworkers who had been discussing whether or not gay people should, or could, have children.

“You all have always said I would be a good mother, that I’m a good teacher. Well, I’m a lesbian. Do you now think the opposite?” she asked.

It was a learning moment for her colleagues who were at first shocked, then genuinely curious. They started asking questions not to criticize, but to learn. Vero says her relationship to them, and with them, changed as a result.

“There was more trust,” she said. “These are the types of conversations that will help transform society.”

But with equal marriage officially won and societal views on homosexuality shifting, however slowly, FALGBT and Argentina’s activists are also pushing forward, focusing their efforts on securing equal gender identity rights. A new bill, which the Chamber of Deputies began debating in August, would, at the very least, declassify gender deviation as a mental illness and allow for name and gender changes on official identification documents.

It would also legalize surgical transition procedures, which are currently prohibited in Argentina. So far, the effort hasn’t been met with nearly as much opposition as the marriage question, and the law is expected to pass once it goes to vote.

Vero sees the reason as two-fold. First, “the Church hasn’t inserted itself like it did with marriage,” she says. “Marriage included family. They argued that the family was sacred, just like they did during the debate over divorce in the 80s.”

“But also with the marriage law, we talked about everything. About everyone’s rights, human rights. Everyone joined together. The trans community fought along with us then, and we’re fighting along with them now.”

Tobar, however, thinks the gender identity bill will see its share of religious opposition as the debates continue. But regardless of how it plays out, the marriage law succeeded in creating a platform for the discussion to occur, and to be taken seriously.

With the law, “people everywhere started talking about homosexuality, about LGBT issues,” Vero explained as we looked through stacks of newspapers she’d archived. “We are progressing. Little by little.”

Research for this report was supported in part by a 2011 Knight Luce Fellowship for Reporting on Global Religion. The fellowship is a program of the University of Southern California’s Knight Program in Media and Religion.