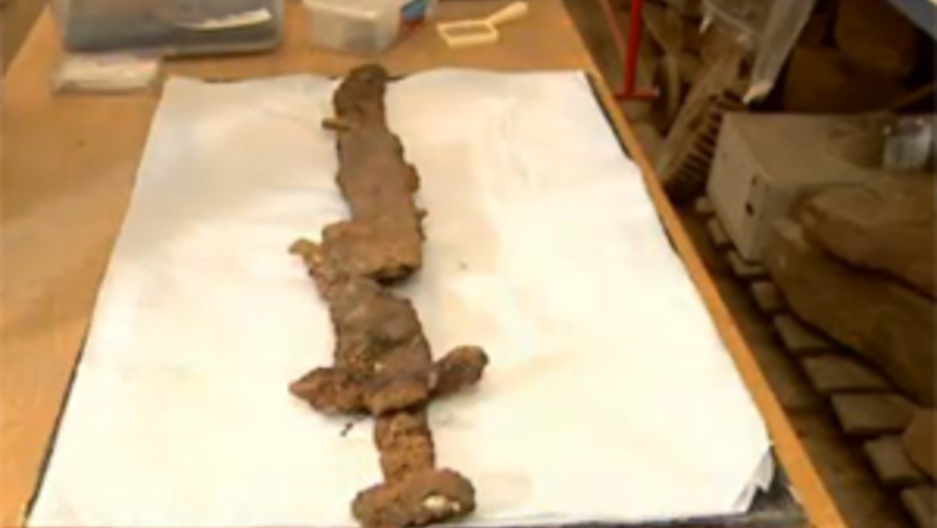 Share
The Geo Quiz involves a little Viking history: We're looking for a remote and isolated peninsula in the Scottish Highlands. Golden and white tailed eagles can be seen here, and there's a historic lighthouse at the point. It looks westward toward the Atlantic. In fact, the lighthouse marks one of the most westerly points on mainland Britain. On a clear day you might spy the isles of Egg and Rum. Archaeologists have uncovered an important burial site that dates back to the age of the Vikings. It's located on the Ardnamurchan peninsula in the Scottish Highlands, the answer to our Geo Quiz. The boat shaped grave site is what remains of a Viking warrior laid to rest atop his 16-foot wooden boat and heaped with cool Viking accessories. Oliver Harris of Leicester University is one of the archaeologists leading the dig. He says it's a treasure trove: "Here we've got axe and sword spear and shield,a strange cauldron metal yet to be identified. flints for making fire really an extraordinary find. It shows this man was really important". Archaeologist Hannah Cobb is a co-director of the dig. She's working to recreate the scene of the burial ceremony that took place roughly a thousand years ago. "The people who were burying this Viking would have dug a boat shaped hole and then they would have dragged the boat up from the sea up to the foreshore where they buried it and put the boat into the whole and then they would have laid the Viking in to the boat and laid all of his possessions around him. So, his shield would have been laid on his chest and his sword was at his side and then they filled up the boat with stones". The stones would have kept the boat from being washed away by tides or flooding. The sword and shield are state of the art 10th century weapons used to plunder and terrorize. Viking warriors carried out brutal raids throughout Scandanavia and as far west as Greenland and the coast of North America. Viking merchants and farmers also ventured throughout this part of the world. There are Viking ruins on some of the nearby Outer Hebrides islands. York England and Dublin Ireland were major Viking trading ports. All of which raises questions about this fellow who's been uncovered in the Scottish Highlands – was he a local or a foreign sailor? A chiefton? or perhaps a famous navigator? Again, here's Manchester University archaeologist Hannah Cobb: "The area that we found the boat burial in we've actually been studying for the last six years, so we've been looking at changes in life and death over the last six thousand years in this study area. And we're going to be carrying on with that study but we're going to focus on the Vikings and see if we can see, perhaps, settlements related to it to see if he was somebody who'd come from far away or, perhaps, whether he was somebody whose ancestors had come from far away and then whether he'd actually lived in the bay." This much is known: The warrior who's buried in his boat on the beautiful Ardnamurchan peninsula died in the 10th century when the Vikings controled the north and west of Scotland. The Norseman's possessions including his beautifully decorated sword and shield, and his bronze drinking horn are being stored for further study in Edinburgh.