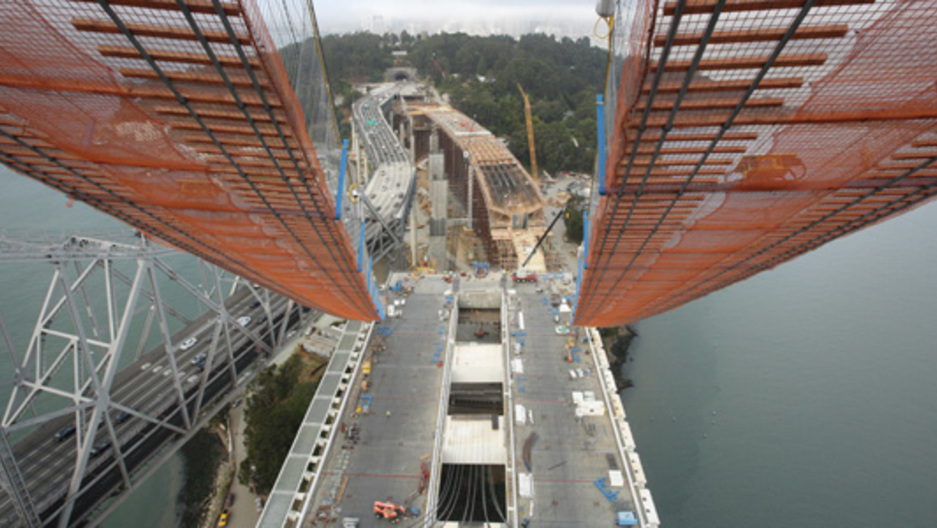 For a civil engineer, there are few better views than a park bench by the water's edge facing San Francisco.

"We can sit here in this little park in Emeryville and look at two of the most magnificent bridges in the world," said William Ibbs, professor of construction management at the University of California, Berkeley. He's talking about the Golden Gate Bridge and the new eastern span of the Bay Bridge. It's under construction and set to open in 2013.

"I think it's is going to be a memorable project, and something that generations of people are going to look at. There's going to be a single tower that goes almost 700 feet in the air, and then it's draped with some cables that have a very elegant catenary effect."

That tower, along with parts of the deck, have been fabricated more than 6,000 miles away in China. They've been shipped piece by piece to the port of Oakland. Ibbs says doing it this way makes a lot of sense.

"Today's engineers need to be more than a technician. They need to be a manager. So you're concerned about what you're building, and how much it's going to cost, and how long it's going to take. I think it's unfortunate that the economics are such that we find it difficult, we in the United States, find it difficult to compete on big projects like this worldwide. But then on the other hand as a taxpayer, I want the government to be thrifty with my dollars."

California officials have estimated that they'll save at least $400 million by relying on low-wage Chinese labor. Former Governor Arnold Schwarzenegger visited the Chinese plant praising "The workers that are building our Bay Bridge."

It's not just California turning to China for help with large-scale infrastructure projects. Chinese companies have helped renovate the New York City rail and subway system as well a bridge over the Harlem River. Governments across the world are also turning to the Chinese as a first choice for bridges and rail.

It's just a taste of things to come says Paul Fica with FTI Consulting in Seattle.

"Five out of the 10 largest contractors in the world are now Chinese contractors." 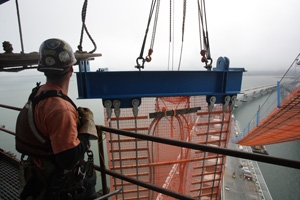 "You don't always get the lowest price and the highest quality. And I think that has largely been why some of the Chinese contractors are so effective at winning work because of price, yet, at the same time, not always effective in producing the highest quality product."

American labor groups have also raised questions about the quality of Chinese workmanship.

The State of California is aware of the concerns. And state officials say they closely monitored the work done in China for the Bay Bridge. Tony Anziano with the California Department of Transportation says the state sent 65 engineers and inspectors to China.

"We had a full-time staff that was onsite, they were onsite 24/7. We had state employees that were living in China. So we didn't just go there and inspect occasionally, we were there for the duration for all of the fabrication work."

The lead contractor, American Bridge/Fluor, also sent an additional 250 inspectors to China. That's a lot of people, making a lot of money, to make sure no one was cutting corners. Those costs weren't factored into the initial $400 million dollar savings estimate.

"Those costs needs to be factored in upfront when somebody makes a price comparison," said Roger Ferch, president of the American Institute of Steel Construction in Chicago. "It's not just what the number is when you slice open the envelope." 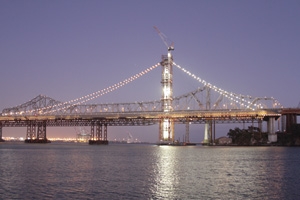 Ferch doesn't trust the savings estimate coming from the state of California. And he argues that any economic analysis also has to factor in not just what's been saved, but what's been lost.

"What is the total cost of that project in lost wages, lost taxes, lost economy in California?"

A growing number of politicians and pundits in California are now expressing anger that their bridge was largely built in China. The contract was awarded in 2006, however, when state unemployment was around 5 percent. Today, California's unemployment rate is 12.1 percent, the second highest in the nation.

But from a purely engineering perspective, William Ibbs from UC Berkeley says you can't argue with the work from China. He says the quality controls and workmanship are top notch.

"It's going to be a bridge that lasts hopefully a couple hundred years. And it's going to be subjected to all sorts of elements: earthquakes, wind, corrosion from the sea. And, you know, it's got to stand up."

For the record, Ibbs is highly confident it will.

Zhenhua, the Chinese company helping build the bridge, is also confident in its work. The company president said, "When people see it, they will ask, 'Who built it?… This will really raise our brand image."